Inoculations of Japan's elderly against the novel coronavirus will start in April as planned but at a slower pace, the minister in charge of the inoculation rollout said Sunday as the country received its second shipment of Pfizer Inc.'s vaccine.

Citing what he said was a delay until May of a production capacity increase by Pfizer, Taro Kono, the administrative and regulatory reform minister, said supply of the vaccine "will be very limited until April," adding, "We will start (vaccination of the elderly) little by little and expand it slowly." 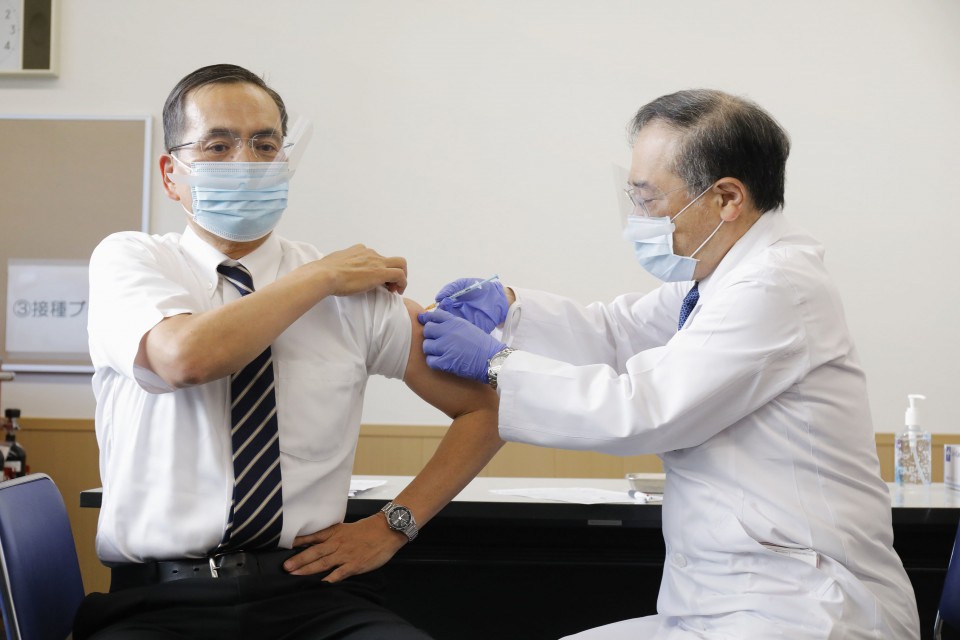 Kazuhiro Araki (L), head of the Tokyo Medical Center, is administered a COVID-19 vaccine at his hospital in Tokyo's Meguro Ward on Feb. 17, 2021, receiving the first shot under Japan's vaccination program against the novel coronavirus. (Kyodo)

Japan last Wednesday started inoculating an initial group of health workers in the first phase of its vaccination rollout.

For people aged 65 or older, a group of about 36 million, vaccinations will start in April under the schedule set by the health ministry. But Kono, speaking on a TV program, said that the vaccine will be only available in limited areas and among limited age groups during that month.

He said it would be difficult to achieve the government's goal of completing vaccination of the elderly in two months and three weeks in large cities. 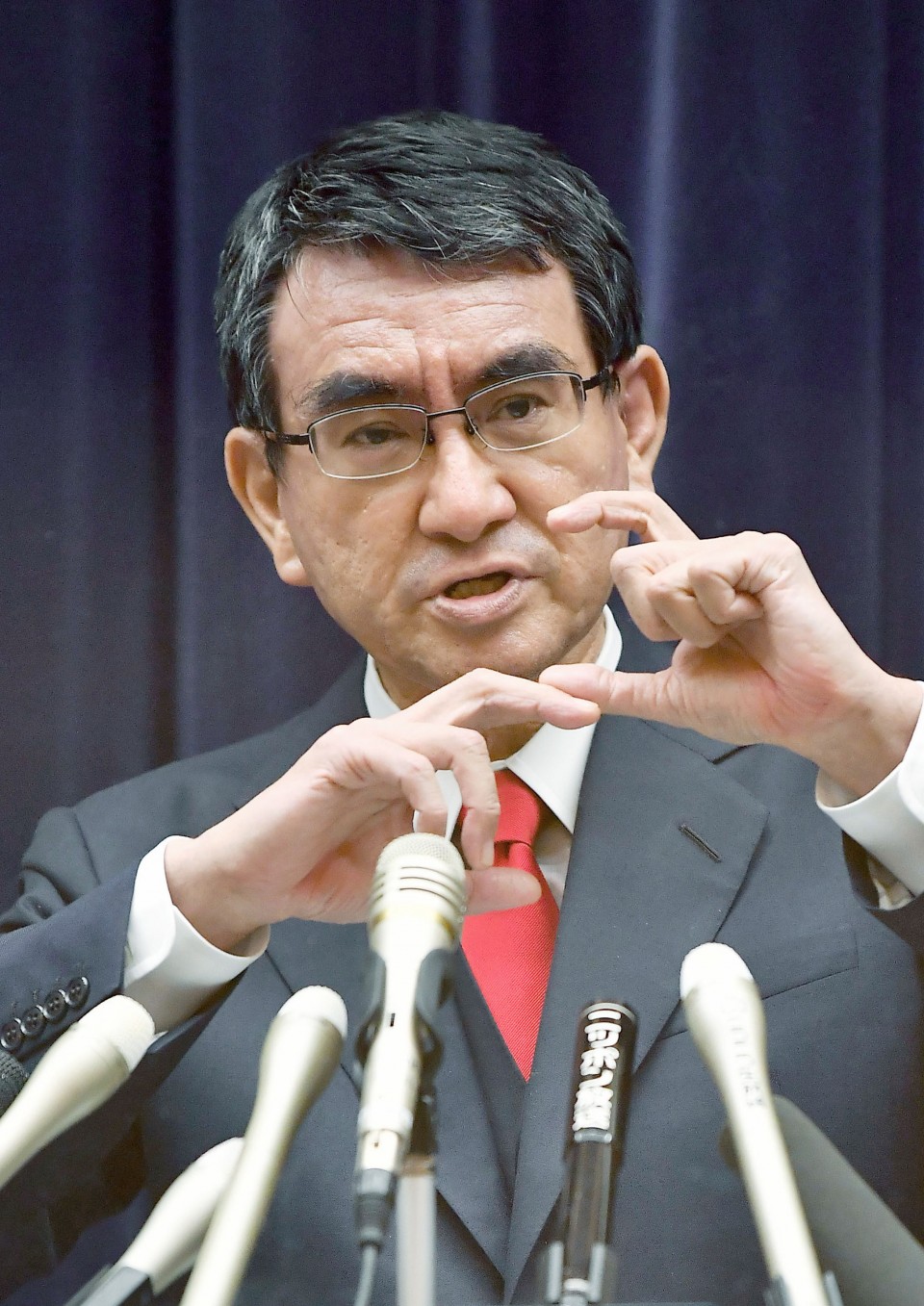 Japanese administrative reform minister Taro Kono, who is in charge of coronavirus vaccination efforts, speaks at a press conference in Tokyo on Feb. 16, 2021. (Kyodo)

With schedules for vaccine supply and inoculations mostly unclear, "we have to make decisions to some extent this week," Kono said.

He apologized for the effect of the uncertainty on preparations by local governments to vaccinate residents.

Japan's second shipment of up to around 450,000 doses of the Pfizer vaccine arrived at Narita airport near Tokyo on Sunday morning after the European Union gave it the green light under its new vaccine export controls.

The Pfizer vaccine is the first Japan has approved for use against COVID-19.

Japan, which received its first shipment of up to 386,100 doses from Pfizer's factory in Belgium on Feb. 12, is seeking to inoculate 40,000 health care workers in the initial phase, starting first in the Tokyo metropolitan area. 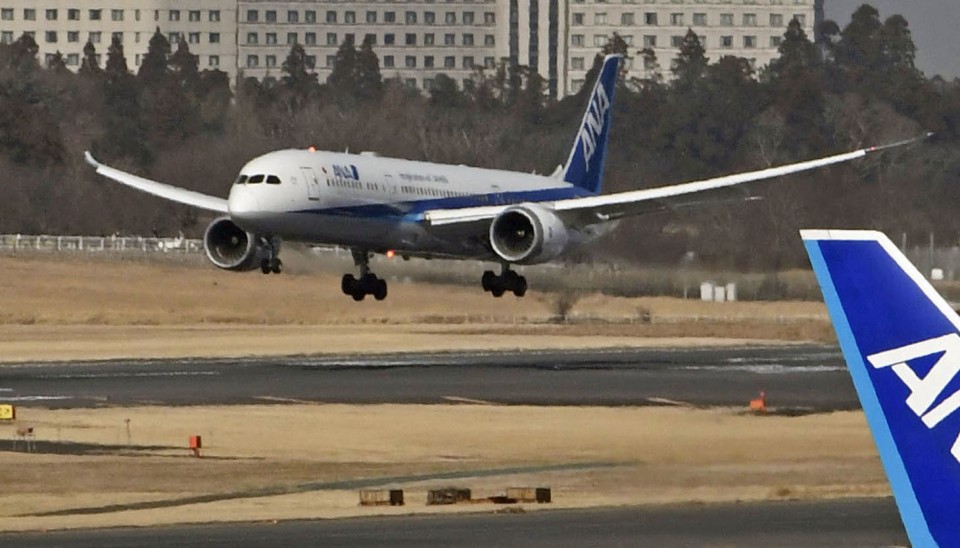 A plane arrives on Feb. 21, 2021, at Narita airport near Tokyo from Brussels carrying the second shipment of Pfizer Inc.'s COVID-19 vaccine. (Kyodo)

The Ministry of Health, Labor and Welfare said 5,039 people had been inoculated at 68 medical facilities as of Friday. 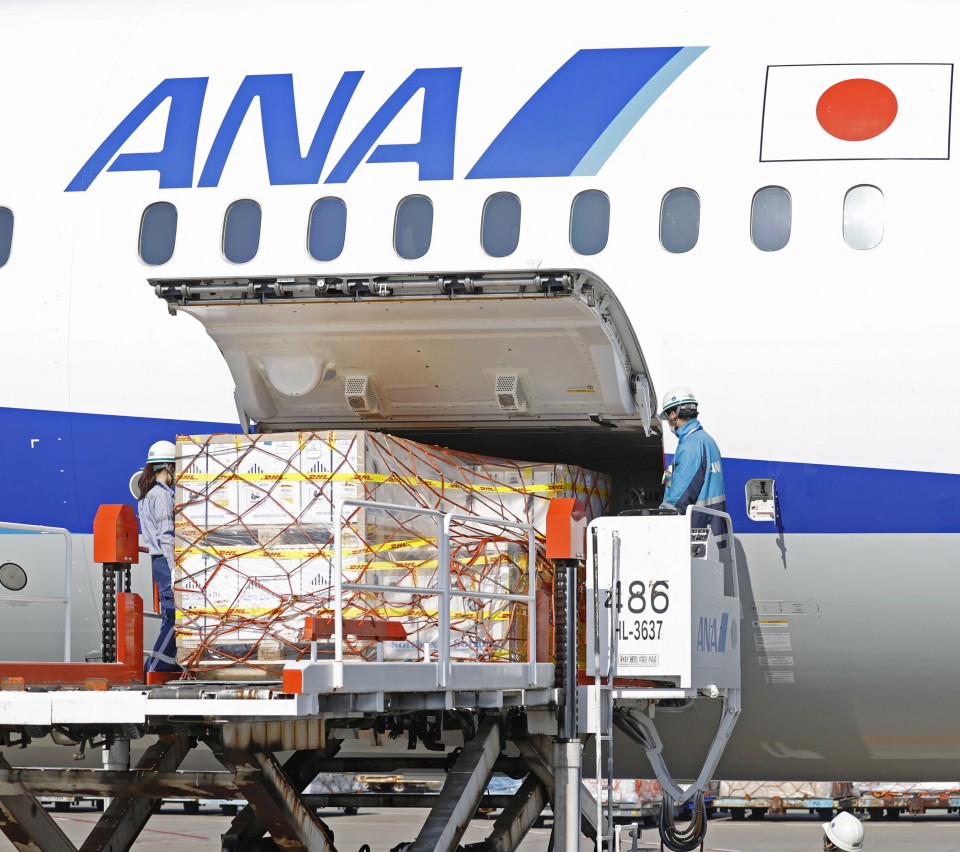 The government said Saturday it had received reports of hives and chills as possible side effects of the vaccine, which U.S. firm Pfizer developed with Germany's BioNTech SE.

But there have been no reports of severe allergic reactions, also known as anaphylaxis, or deaths after shots were administered.

Of the 40,000 health care workers, 20,000 are taking part in a study to track potential side effects caused by the vaccine, keeping daily records for seven weeks after receiving the first of two shots. The shots will be administered three weeks apart.

The next group in line to be vaccinated from March is an estimated 4.7 million other front-line health care workers across the country.

After inoculations begin of people aged 65 or older, people with preexisting conditions and those working at elderly care facilities will be targeted, and then finally the general population, according to the health ministry.