Earlier this month, China put into effect legislation that explicitly allows its coast guard to use weapons against foreign ships that it sees as illegally entering its waters. 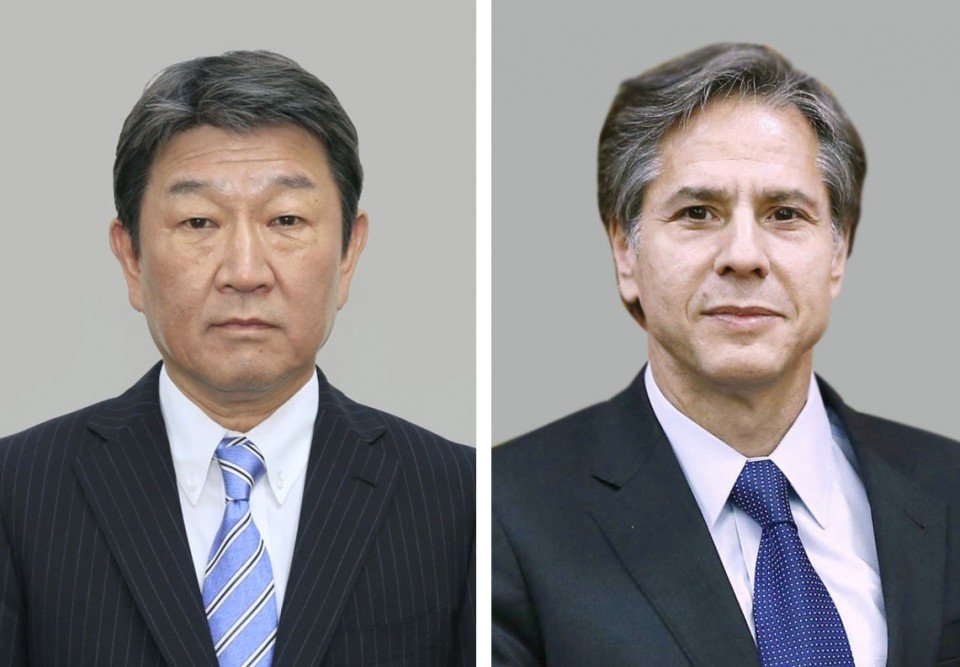 Blinken reaffirmed the U.S. position that the Senkakus, which China calls Diaoyu, fall under the scope of a security treaty between the two countries, meaning Washington will defend Tokyo's interests in the event of an armed attack against the uninhabited islets.

Motegi and Blinken also agreed to steadily beef up cooperation among four Indo-Pacific democracies known as the Quad -- Japan, the United States, Australia and India -- and to work toward realizing a "free and open" region amid China's growing clout, according to the ministry and the department.

The talks between the top diplomats were the second in less than a month. Their first call took place just hours after Blinken won Senate confirmation to become secretary of state on Jan. 26.

The latest exchange also came amid continuing protests in Myanmar against the military coup with protestors defying a ban on large gatherings to take to the streets. A woman struck in head on Tuesday when police fired warning shots and rubber bullets in the capital Naypyitaw remains in critical condition.

According to the Japanese ministry, Motegi and Blinken expressed grave concern over the situation in Myanmar and agreed to strongly urge the Myanmar military to release civilian leaders, including Aung San Suu Kyi and others who have been detained since the Feb. 1 coup.

"We will continue to closely cooperate" on the issue, the ministry said in a press release.

It is unclear whether the Japanese government will follow suit and impose sanctions on the Southeast Asian nation. Tokyo has so far maintained a cautious stance, partly due to concern that isolating Myanmar could push the country further toward dependence on China.

U.S. State Department spokesman Ned Price emphasized that Washington wants to make sure U.S. efforts on the Myanmar issue are known to its partners in the Indo-Pacific region and "to the extent possible calibrated with them."

"Working with our closest partners, our like-minded partners around the world, we can have the most impact, we can impose the most substantial costs on those who are responsible for this coup," he said at a press conference Wednesday.