The announcement comes as Suga struggles to bring the coronavirus under control in the face of criticism of a sluggish pandemic response and ahead of this summer's Tokyo Olympics and Paralympics. 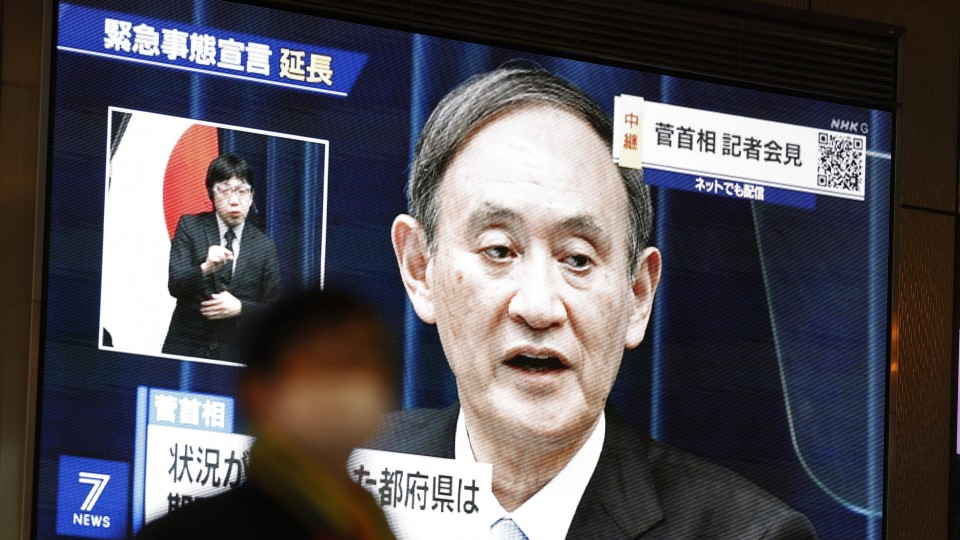 A roadside screen in Osaka shows Japanese Prime Minister Yoshihide Suga holding a press conference on Feb. 2, 2021, to announce an extension of the coronavirus state of emergency for Tokyo, Osaka and other regions by one month to March 7 in view of manpower-strapped hospitals. (Kyodo) ==Kyodo

A health ministry panel could approve Pfizer Inc.'s vaccine on Feb. 12, according to an official with knowledge of the matter. The first batch of doses would then arrive from Belgium in Japan on Feb. 14 with final approval for the vaccine expected to come the following day.

The government plans to inoculate 10,000 health workers participating in trial vaccinations to confirm their safety in February, followed by an additional 3.7 million frontline health workers from mid-March.

People aged 65 and older, a group of about 36 million, will follow at the beginning of April at the earliest, followed by people with pre-existing conditions, then finally the general population.

Suga has pledged to secure vaccines for Japan's entire population of 126 million, though he admitted at a press conference the country has fallen behind other countries in beginning to administer shots, citing an abundance of caution in ensuring their safety.

The government has agreements in place with Pfizer, AstraZeneca Plc. and Moderna Inc. to receive enough doses for 157 million people. The latter two have yet to apply for approval from the health ministry.