The head of the Tokyo Olympic organizing committee said Thursday that how to deal with spectators for this year's Summer Games amid the coronavirus pandemic may become clearer around March 25.

Seiko Hashimoto, who became president of the committee a week ago following a sexism row sparked by her predecessor, said she wants to set a direction on the issue around that day, when the domestic leg of the torch relay for the Tokyo Olympics is slated to begin. 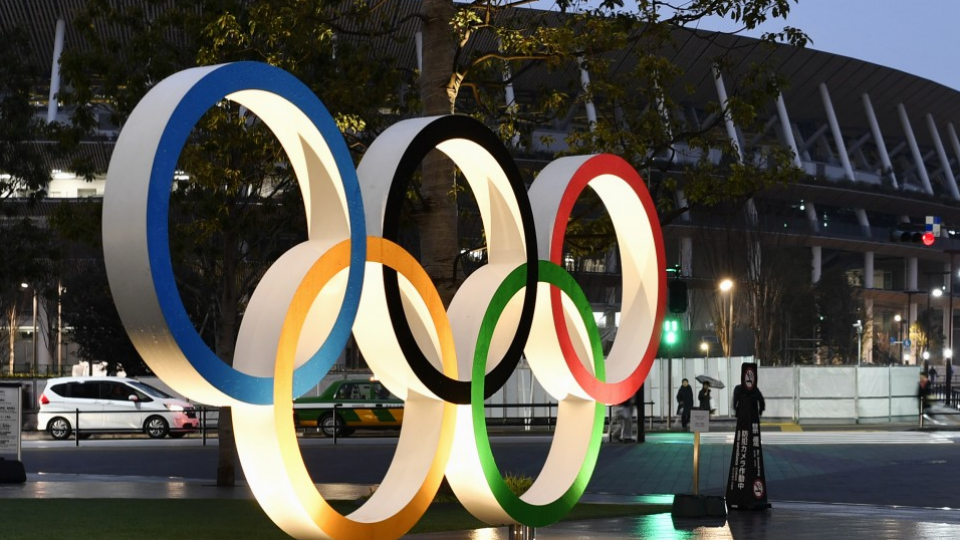 Photo taken in January 2020 shows a monument depicting the Olympic rings in front of Tokyo's new National Stadium, the main venue for the Olympics and Paralympics. (Kyodo) ==Kyodo

"It would be better to come out with a big-picture plan on spectators as soon as possible. At least, I want to set the direction first," Hashimoto told reporters after a meeting with Japan Sports Agency Commissioner Koji Murofushi.

Her remarks came after International Olympic Committee chief Thomas Bach said at a press conference Wednesday that a decision on whether to allow overseas spectators to attend the games, delayed for one year due to the pandemic, could be made in April or early May.

Bach said the need to finalize planning for ticketing, logistics and immigration procedures meant a decision could not be made any closer to the opening of the Olympics on July 23.

"We would like to wait to the very last moment, but this is not possible," Bach said.

Christophe Dubi, the IOC's Olympic Games executive director, later said it wanted the decision made "as late as possible, but as early as needed," to observe the progress of global efforts to combat the virus, while also allowing enough time for planning.

"Toward the end of April would be the right time," said Dubi, who also suggested separate decisions might be made for spectators traveling from abroad and those based in Japan.

On Thursday, Japan's Olympic minister Tamayo Marukawa, who took up the post previously served by Hashimoto, told a parliamentary session she is not aware that the IOC's views should be regarded as a "deadline" or whether such a decision will be made by around that time.

Given that a meeting of the games' organizers, including the IOC and the Tokyo metropolitan government, may be held next week, Marukawa said she will check on potential scenarios.

Despite lingering skepticism about the fate of the Olympics and Paralympics, IOC and Japanese officials have insisted that Tokyo will be able to stage the games, pinning hopes that the rollout of COVID-19 vaccines in many parts of the world will help defeat the virus.

The Tokyo Olympic organizing committee, which was under fire over sexist comments by its former president Yoshiro Mori, is now looking to improve the image of the games under the leadership of Hashimoto.

On Thursday, the committee released a set of coronavirus countermeasures for the Japanese leg of the torch relay, which kicks off in Fukushima Prefecture in exactly one month.

According to the guidelines, spectators will be encouraged to clap their hands instead of shouting along the route, while runners will be required to log their health for two weeks before taking part in the relay, which will pass through the country's 47 prefectures before the opening ceremony of the Olympics.

The committee also advised fans to watch live online broadcasts of the relay to prevent overcrowding on roadsides, and that the event may be suspended if too many people gather along the route.

The Olympic flame was lit in ancient Olympia, Greece, in March last year. The Greek leg of the relay, which was scheduled to take place before the flame was handed over to Japan, was canceled on the second day after a huge crowd turned out to watch the event.