The first month of U.S. President Joe Biden's administration has largely been about turning the page on his predecessor Donald Trump's "America First" unilateralist foreign policies and his unpredictable leadership style.

But the Biden administration has made clear that it will inherit his predecessor's tough line toward China, while how it plans to engage with North Korea remains unclear. 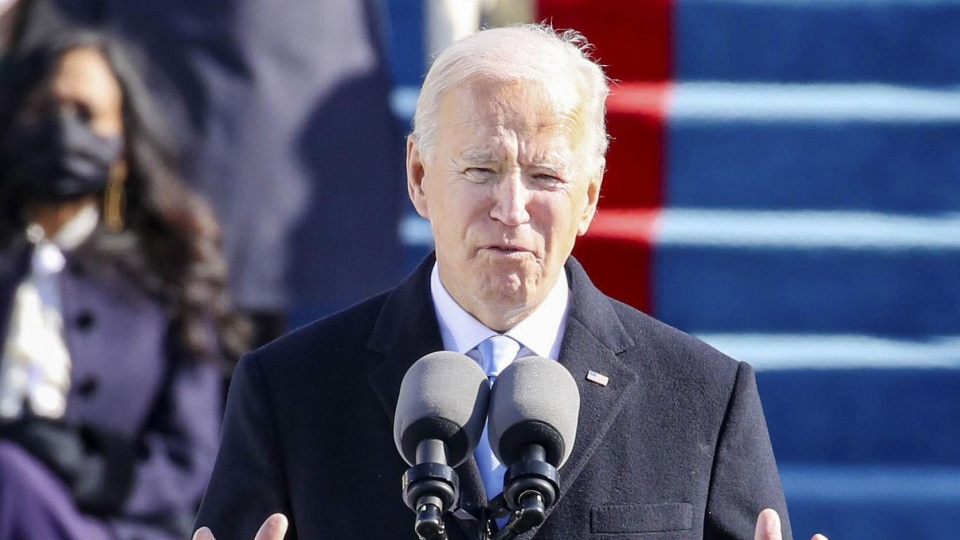 "My impression is that we are seeing a trend of toughness continuing against China," Japanese Ambassador to the United States Koji Tomita said Friday, comparing with the Trump administration that saw an escalation of confrontation with China on various fronts, and virtually no cooperation toward the end of his presidency.

What is different from the Trump era, however, is that the Biden administration is "seeking to work in consultation with allies as it considers its relations with China," the ambassador said during an online press conference.

In a speech on Friday, which became his first address before a global audience since taking office on Jan. 20, Biden rallied countries in Asia and Europe to prepare together for what he views as a "long-term strategic competition with China," citing the need to push back against Beijing's "economic abuses and coercion."

He has also signaled during his recent phone talks with Chinese President Xi Jinping that he will not hold off on defending American values such as human rights and democracy and warned during a televised event of possible "repercussions" for China's crackdowns, such as against the Muslim Uyghur minority in its Xinjiang region.

On the security front, the Biden administration has pledged its "rock-solid" commitment to Taiwan, a self-ruled democratic island facing pressure from Beijing, and affirmed to Japan multiple times that the U.S. defense commitment extends to the Japan-controlled, China-claimed Senkaku Islands in the East China Sea.

The U.S. Navy's so-called freedom of navigation operations in the South China Sea have also been carried out twice over the past month, based on announcements by the 7th Fleet, in an effective bid to challenge Chinese claims and actions in the disputed waters.

White House Press Secretary Jen Psaki said in late January that a "new U.S. approach" is required toward China to deal with the Asian economic powerhouse that is "growing more authoritarian at home and more assertive abroad."

But some foreign policy experts have said that fleshing out a new policy is the "real challenge" for the Biden team, given its desire to explore cooperation with Beijing in areas that serve America's interests, possibly issues such as climate change.

Biden's climate envoy John Kerry has said the United States must deal with China on global warming as a "critical standalone issue" but denied any trade-offs with U.S. concerns such as intellectual property theft and other disturbing behaviors.

"Now the question, of course, is that if you have a policy which on the one hand is tough toward Beijing, how do you get the concessions you're hoping for on issues where you see there is mutual advantage?" said James Lindsay, senior vice president at the Council on Foreign Relations, a U.S. think tank.

He also said working with allies and partners to develop common policies to make China play by the same international rules is something "easier said than done."

On North Korea, the Biden administration is also conducting what it has called a "thorough" policy review, outlining that its focus will be on reducing the threat to the United States and its allies, improving the lives of the North and South Korean people while maintaining its commitment to Pyongyang's denuclearization.

In either case of the policy reviews on China and North Korea, the Biden administration has not shown any clear timelines as to when the process will end.

Psaki said Wednesday that the White House is "not in a rush" in deciding its approach to China as its current focus is on communicating with U.S. allies and partners. State Department spokesman Ned Price has also said that consultations with allies such as Japan and South Korea are continuing on North Korea issues.

But even as the Biden administration is ramping up its efforts to revitalize its network of allies and partnerships to deal with the emerging challenges from what it calls a "position of strength," the security situation in the region seems to be deteriorating.

Concerns are growing in Japan and neighboring countries over an escalation in maritime disputes following Beijing's implementation on Feb. 1 of a new law that explicitly allows the Chinese coast guard to use weapons against foreign ships it sees as illegally entering China's waters.

The United States said Friday that it will join Japan and others in expressing concern over the controversial law, but Chinese coast guard vessels continued to be spotted in Japan's territorial waters near the Senkaku Islands over the weekend.

North Korea, for its part, has not tested intercontinental ballistic missiles and nuclear devices since 2017, but the secretive country is expected to have continued to hone its military capabilities while nuclear negotiations with the Trump administration have been in a stalemate.

Lindsay said that it is unlikely that U.S. allies would be alarmed about the ongoing policy review process, as they understand that it takes time for all new U.S. presidencies to "get their policies in order."

Administrations need time to build their staff because many senior officials have to be confirmed by the Senate, and allies are likely aware that Biden also has to deal with challenges at home, including the need to bring the coronavirus pandemic under control and put the economic recovery back on track.

But Lindsay admitted that concerns could be heightened "if strategic reviews drag on without any conclusion, or events arise that the Biden administration is slow to address or mishandles."

"So while most U.S. allies, friends, and partners will be patient, that patience will have its limits," he added.