Japan's exports posted their sharpest growth in 27 months in January as they continued to recover from a coronavirus-triggered global slump, driven by brisk demand in China and other Asian countries, government data showed Wednesday.

Exports in the reporting month rose 6.4 percent from a year earlier to 5.78 trillion yen ($54.5 billion), their biggest rise since October 2018 and the second straight month of growth following a 2.0 percent rise -- and the first increase in 25 months -- in December, according to the preliminary data released by the Finance Ministry. 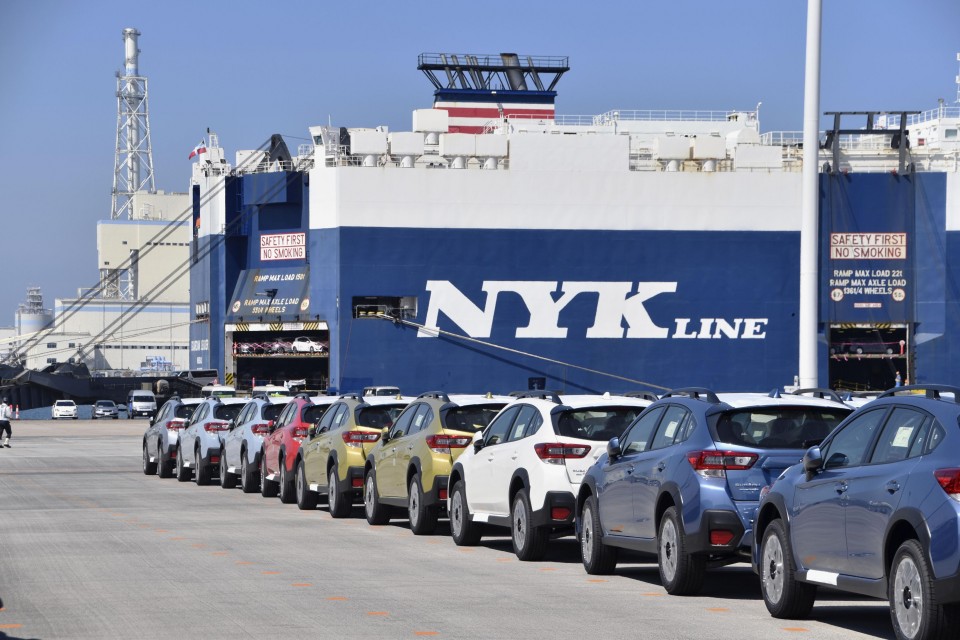 New cars to be exported overseas are lined up at a port in Hitachinaka, Ibaraki Prefecture, in August 2020. (Kyodo)

The January exports were led by a 37.5 percent surge in exports to China, the biggest expansion since April 2010, along with a 19.4 percent jump in shipments to Asia as a whole.

Shipments to China were lifted in part by the annual weeklong Lunar New Year holidays, which started in mid-February this year instead of late January last year. Many factories are closed during the holidays in China.

Among export items with solid growth was chipmaking equipment to countries such as China and South Korea amid the global shortage of semiconductors.

Exports of semiconductor production equipment jumped 50.5 percent in January and those of plastic soared 30.4 percent, while car exports declined 5.8 percent due to sluggish demand in Europe and those of auto parts edged down 0.5 percent.

Imports of goods fell 9.5 percent to 6.10 trillion yen, down for the 21st month in a row, as prices of crude oil from producers such as the United Arab Emirates continued to drop. But the pace of decline was slightly slower than the 11.6 percent marked in the previous month.

The trade balance logged a deficit of 323.86 billion yen, the first red ink in seven months but shrinking 75.4 percent from a year ago.

By country, imports from China inched down 0.9 percent with drops in clothes and metal products offsetting rises in cellphones and computers. The balance was 486.99 billion yen in deficit for Japan, a red ink for the 11th successive month.

Exports to the United States fell 4.8 percent for the third straight month of decline, reflecting poor sales of aircraft. Exports of cars and auto parts were down 0.6 percent and 8.5 percent, respectively.

Imports from the United States dropped 14.0 percent, resulting in a surplus for Japan of 415.22 billion yen.

Maeda said overall exports could slow in the first half of 2021, "with the current shortage of semiconductors for autos weighing on vehicle production in Japan and overseas."

The trade figures came two days after the government announced that Japan's gross domestic product grew an annualized real 12.7 percent in the October-December period from the previous quarter.

Helped by strong exports, GDP expanded by a double-digit percentage for the second consecutive quarter following an annualized 22.7 percent leap in the previous three-month term. GDP had contracted an annualized 29.3 percent in the April-June period, the sharpest fall on record.