The finance chiefs of the Group of 20 advanced and emerging economies agreed Friday to continue supporting low-income nations and avoid a "premature" withdrawal of fiscal and monetary stimulus as economic recovery from the coronavirus pandemic is still fragile and uneven.

After a virtual meeting, Italian Finance Minister Daniele Franco said the group agreed to bolster international coordination in tackling global challenges as the equitable distribution of vaccines is seen as critical in containing the COVID-19 crisis globally. 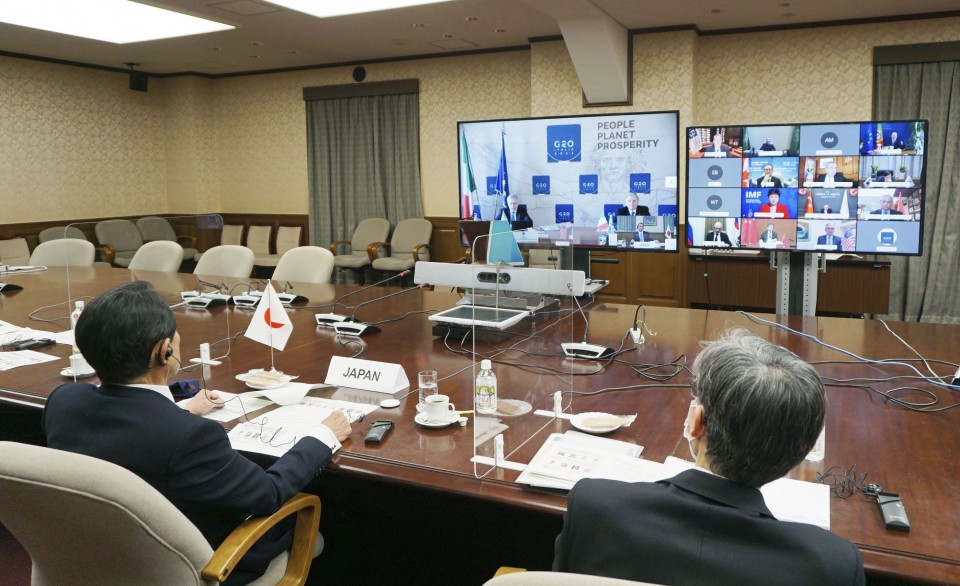 Finance chiefs from the Group of 20 economies attend a virtual meeting on Feb. 26. (Photo courtesy of Japan's Finance Ministry)(Kyodo)

The meeting of the G-20 finance ministers and central bank governors was the first since U.S. President Joe Biden took office in January and shifted course from his predecessor Donald Trump, who shunned multilateral engagement in pursuit of national interests.

Multilateral coordination and cooperation are taking on greater importance to overcome the pandemic and chart a path to economic recovery. The rollout of vaccines has raised hope for further recovery of the world's economy, which is now projected by the International Monetary Fund to grow 5.5 percent this year after a severe hit in 2020 from drastic lockdown measures and travel restrictions to stop the spread of the virus.

"I called for further G-20 unity in supporting low-income countries as the gap is widening (with richer countries) in vaccinations in addition to their lagging economic recovery," Japanese Finance Minister Taro Aso told reporters.

Aso said the G-20 countries need to remain vigilant against uncertainties, noting that "competition" continues between progress in vaccinations and the emergence of new coronavirus variants.

U.N. Secretary General Antonio Guterres urged the G-20 earlier in the month to draw up a global vaccination plan, saying that just 10 countries have administered 75 percent of all COVID-19 vaccines while over 130 countries have yet to receive a single dose.

In Japan, a fresh state of emergency over the virus for some urban areas with relatively high infections such as Tokyo since early January is expected to have dented growth in the economy. Only recently have vaccinations begun for frontline health workers with the rescheduled Tokyo Olympics and Paralympics approaching this summer.

Digital taxation was also high on the agenda at the G-20 meeting and new U.S. Treasury Secretary Janet Yellen reportedly dropped a demand made by the Trump administration for a "safe-harbor" clause that would allow companies to choose to operate under the current taxation rules.

With global digital giants like Facebook Inc. and Amazon.com Inc. seen as not paying their share of taxes by taking advantage of low-tax jurisdictions, talks to create a new digital taxation framework have stalled due to disagreements among countries.

About 140 countries are now aiming to reach an agreement by mid-2021. Yellen's move could smooth the way for such an accord.

The pandemic has prompted advanced nations to ramp up fiscal support while developing countries with high debt levels have had little room for policy action to weather the health crisis.

In November, the G-20 extended its program to suspend debt servicing payments by developing countries until June this year.

The finance chiefs of the group are expected to examine by April whether another six-month extension is needed, taking into consideration the economic and financial situation.

The program, called the Debt Service Suspension Initiative, was launched in May last year by the G-20 and Paris Club of traditional creditor nations after the virus outbreak saw vulnerable countries saddled with higher financing costs.