The coronavirus pandemic has widened a divide between winners and losers in the retail apparel sector in Japan as an increasing number of people prefer reasonably priced functional garments, moving away from traditional business wear.

A retailer of food and apparel items in Gunma Prefecture, north of Tokyo, opened its first store named "Workman" selling construction workers' clothing in 1980. In 1982, Workman Co. was established. 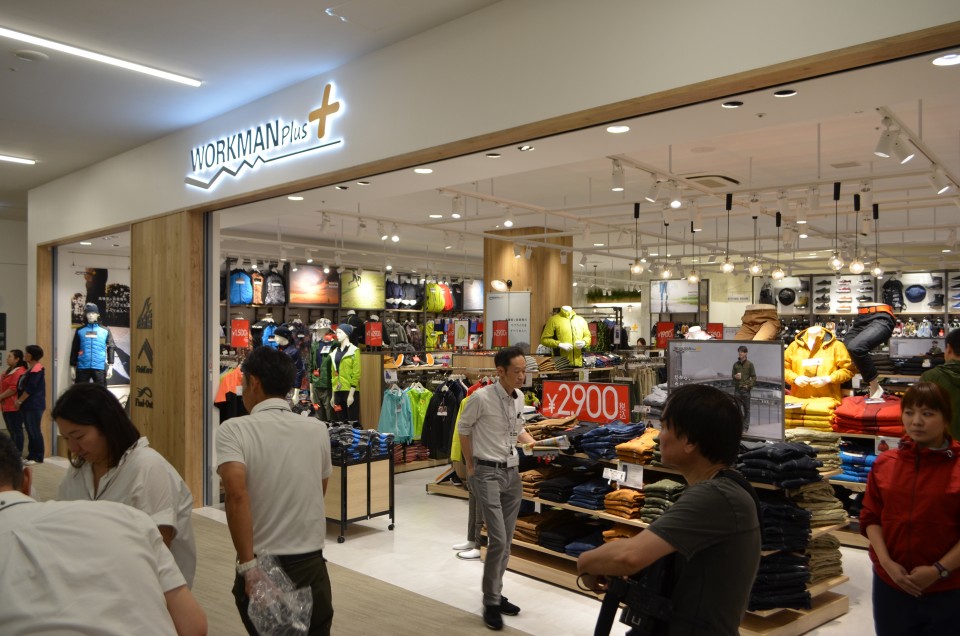 Workman Co.'s first store for its "Workman Plus" casual clothing brand opens at a shopping mall in Tokyo on Sept. 5, 2018. (Photo courtesy of Workman Co.)(Kyodo)

The number of Workman stores across the country reached 902 as of the end of January, surpassing the 809 stores run by Japanese apparel giant Fast Retailing Co.'s Uniqlo casual clothing chain, with its product lineup expanding to sports and outdoor wear.

In the current business year ending in March, Workman expects its sales and operating and net profits to grow for the 10th straight year.

It has seen same-store sales rise every month since October 2017, even during the country's state of emergency in effect from April to May due to the coronavirus pandemic.

"That's one of the factors which boosted our sales even during the state of emergency," he said.

Workman opened a new chain of stores named "Workman Plus" in 2018 to sell reasonably priced sports and outdoor clothing after the company's water- and cold-resistant raincoats for construction workers gained popularity among motorcyclists for use during winter.

Workman has collaborated with social media influencers who regularly wear Workman clothing for sales promotions. Calling them the brand's "ambassadors," the company asked about 10 of them to co-develop around 30 items last year, using a budget which otherwise would have been spent on advertising.

"We are aiming to expand the number of our stores to 1,500 over the coming 10 years," said Hayashi.

Private-sector economists said Workman has been riding the wave of an outdoor activity boom in Japan due to the pandemic.

"The pandemic has further expanded a deep gap between winners and losers in the apparel industry," said Jun Kawahara, a senior analyst at Daiwa Securities Co.

Fast Retailing is another beneficiary of the change in consumers' preference in everyday garments.

With people generally not too fussy about how they look when working from home, Kawahara said, "The high functionality of casual brand clothing such as Uniqlo's quick-drying Airism products gained increased attention because of the pandemic."

Fast Retailing expects its net profit to grow 83 percent to a record 165 billion yen ($1.6 billion) in its current business year through August on sales of 2.2 trillion yen, up 9.5 percent.

Meanwhile, men's business wear and luxury apparel retailers continue to struggle with a decline in sales that began even before the pandemic as the working population decreases due to the graying of Japan's population.

Office workers are also dressing more casually since the government launched its "cool biz" campaign in 2005, recommending doing without suit jackets and ties in a bid to cut down on air conditioner use in summer.

Aoyama Trading Co., which operates more than 850 off-the-rack suit stores in Japan, plans to close 160 by March 2022 and downsize 400 outlets by March 2024, respectively, as part of restructuring efforts, sources close to the matter said.

The business wear retailer said the number of men's suits sold at its outlets dropped 33.9 percent from a year earlier in the nine months through December.

Commenting on the evolving trend in the apparel sector, Kawahara said, "I don't think all tailors will disappear, but I don't know how many stores can eventually survive after consumers have somewhat shifted their focus on attire to functionality."

"I don't find any quick answers for apparel retailers who sell pricy clothing at department stores," he said. "The problem is there are still too many apparel makers."