Japan's wine imports in 2020 decreased 7.0 percent from the previous year on a volume basis, as stay-at-home requests amid the novel coronavirus pandemic dampened demand from restaurants and bars, government data showed Thursday.

Meanwhile, imports of Chilean wine, popular for its affordability, grew 4.0 percent, making the South American nation the biggest supplier to Japan for the sixth straight year, according to the Finance Ministry. 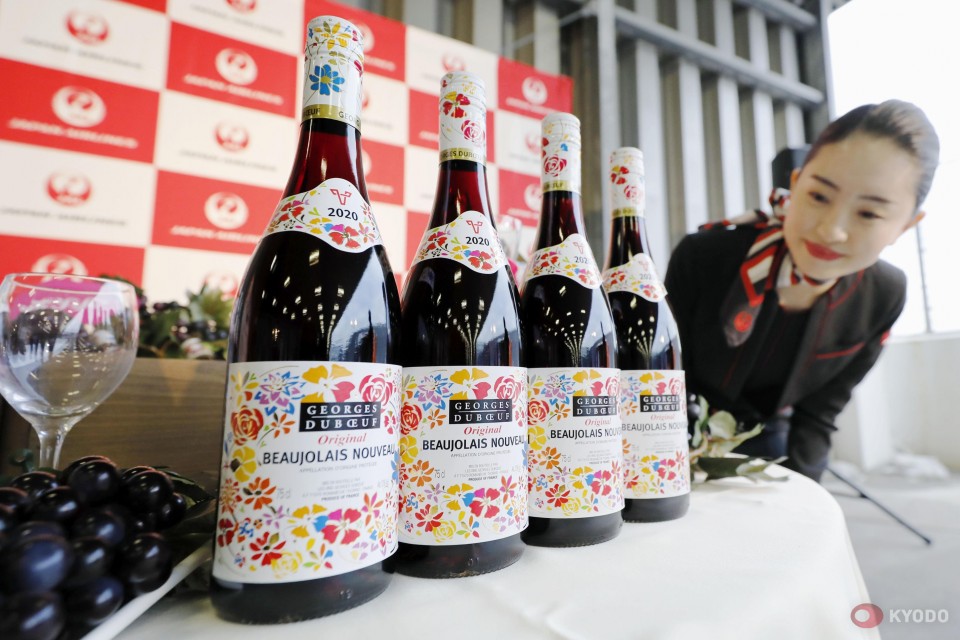 Bottles of Beaujolais Nouveau arrive at Tokyo's Haneda airport about two weeks earlier than the average year in October 2020, as the importer took quicker action in view of substantial flight cuts by coronavirus-hit airlines. (Kyodo)

Total imports of bottled wine in 2020 fell to 163.90 million liters from the previous year's 176.29 million liters. They rose 6.0 percent in 2019, with imports of European wines soaring as Japan eliminated tariffs on them after signing a free trade deal with the European Union that came into force in February that year.

Among the biggest five wine exporters to Japan in the reporting year, only Chile saw annual growth, increasing to 49.10 million liters from 47.21 million liters.

According to Japanese producers, sales of wine in the country on a volume basis are believed to have declined around 10 percent last year, with Keiko Yoshio, president of Suntory Wine International Ltd., saying, "A shift in demand from commercial to household consumption has been seen."

The government declared its first state of emergency over the pandemic in early April last year covering Tokyo and six prefectures, urging people to stay at home and non-essential businesses, including restaurants and bars, to suspend operations.

The emergency was extended nationwide later that month, weighing heavily on the world's third-largest economy until it was completely lifted in late May.