"Japan urges South Korea to take appropriate action to correct this violation of international law," Press Secretary Tomoyuki Yoshida told a press conference, stressing that it is up to the South Korean side to "bring wisdom together" to come up with a solution. 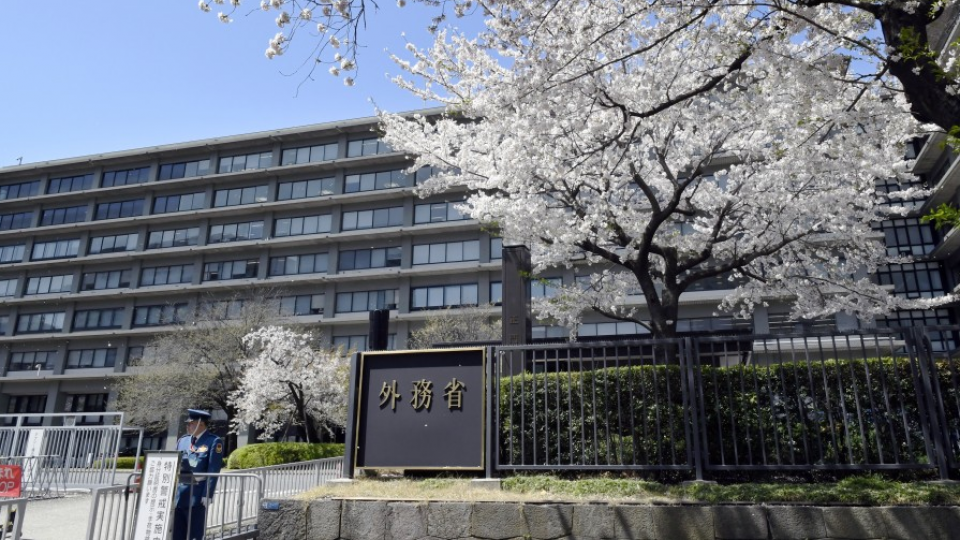 File photo from 2017 shows the entrance of the Ministry of Foreign Affairs in Tokyo. (Kyodo)

In a related development, senior Foreign Ministry officials from the two countries are planning to hold online discussions as early as later this week in a bid to break the impasse over Friday's ruling, according to sources familiar with the matter.

It would be the first director general-level meeting between the two countries since October.

Some lawmakers of Japan's ruling Liberal Democratic Party have pressured the government to take decisive action against South Korea following the ruling, which stipulates a time limit for appeal at midnight on Jan. 23.

At an LDP meeting on Tuesday, the lawmakers said the government should take Seoul to the International Court of Justice or delay installing its new ambassador to South Korea, Koichi Aiboshi.

"As it would mean putting one's cards on the table, I cannot say what kind of action we may take or its timing," Yoshida said. "We will closely watch how the South Korean side will respond."

The Seoul Central District Court ordered the Japanese government to pay 100 million won ($91,000) each to 12 former comfort women as they had demanded, further souring bilateral relations that have already sunk to a historic low over trade and wartime labor issues.

Tokyo has said compensation issues related to comfort women were settled by a 1965 agreement between the two countries and that the ruling also violates a bilateral accord struck in 2015 to "finally and irreversibly" resolve the comfort women issue.

But South Korea's Foreign Ministry spokesman said in remarks on Friday that the government respects the court's decision.

On Wednesday, Yoshida condemned Seoul's action, saying, "The ruling is absolutely unthinkable in terms of international law and bilateral relations and has resulted in an abnormal situation."