The U.S. capital is on high alert ahead of President-elect Joe Biden's inauguration next week, with the main areas of a national park at the heart of Washington closing from Friday amid concerns over more unrest in the wake of the Capitol riot.

The public closure of the National Mall, where many people usually gather for inauguration festivities, will continue through at least Thursday, a day after the swearing-in ceremony. Biden is scheduled to take the oath as the 46th president of the United States on the steps of the Capitol, located east of the mall. 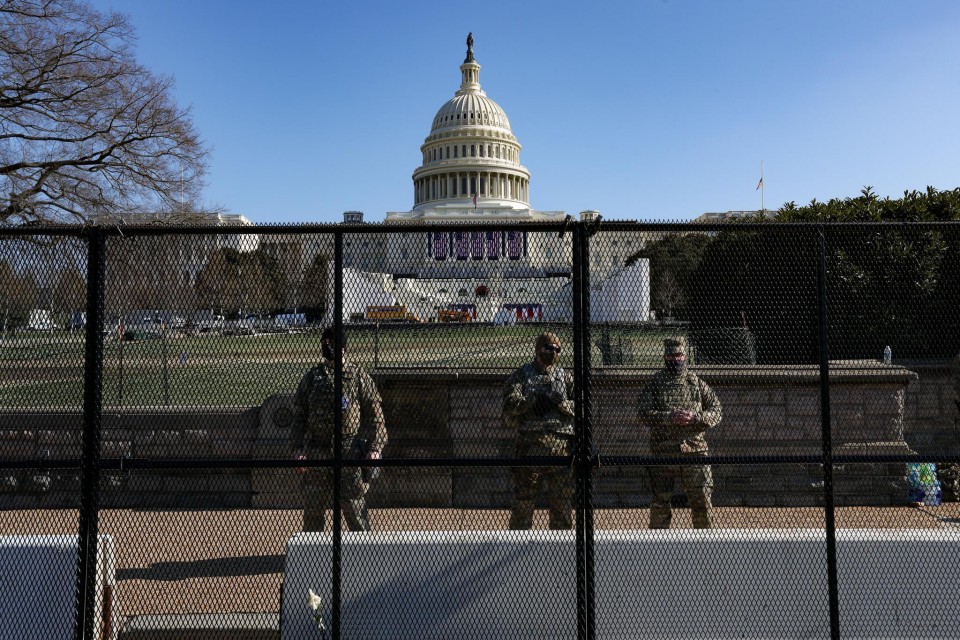 Members of the National Guard are issued weapons outside of the U.S. Capitol in Washington on Jan. 13, 2021. (Anadolu Agency/Getty/Kyodo)

Attributing the breach of the Capitol on Jan. 6 to "domestic violent extremists," the National Park Service warned that the incident "could serve as a driver for future targeted violence directed towards government officials, federal landmarks, members of the media, and members of the general public."

During the Capitol riot, a mob incited by President Donald Trump stormed the building in an apparent attempt to block Congress from certifying Biden's win in the November election.

The National Park Service said groups involved in the riot "continue to threaten to disrupt" the inauguration, which is largely planned to go virtual because of the spread of the novel coronavirus.

Officials have already called up more than 20,000 National Guard troops, closed Metro stations, and established a security zone that includes the Capitol, the White House and portions of downtown, according to The Washington Post.

Landmarks in the capital such as the Washington Monument have also been closed.

During the inauguration on Wednesday, Biden and Vice President-elect Kamala Harris will take the oaths of office, which are usually administered at noon, and review military troops -- a long-standing military tradition that reflects the peaceful transfer of power to a new commander-in-chief.

Although there will be no traditional inaugural parade from the Capitol to the White House, Biden will arrive at the White House with a presidential escort consisting of representatives from every branch of the military, according to a committee organizing the inaugural events.

A "virtual parade" showcasing communities across the country will be televised.

Trump, who has claimed that the election was rigged, has refused to attend the inauguration. After having considered a Tuesday departure, he plans to leave Washington on the morning of inauguration day, Reuters said.