Daieisho blasted his opponent out of the ring in a heartbeat Saturday to take the sole lead at the New Year Grand Sumo Tournament with a perfect 7-0 record against higher ranked opponents.

The 27-year-old No. 1 maegashira's charge sent sekiwake Takanosho (4-3) staggering backward, and two follow-up thrusts were all Daieisho needed to complete his victory in 2.5 seconds. 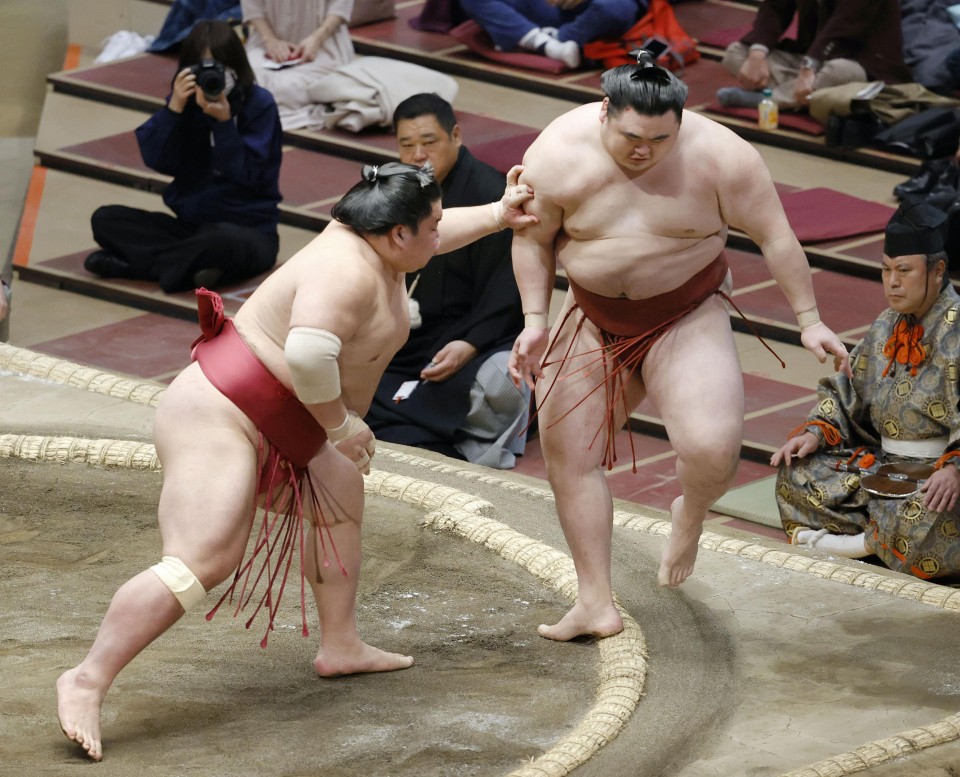 With neither yokozuna competing in the 15-day event at Tokyo's Ryogoku Kokugikan, Daieisho has now taken on the best the field has to offer. He is the first rank-and-file wrestler to start a tournament 7-0 against wrestlers from the sport's top four ranks since grand tournaments switched to a 15-day format in 1949.

"Beating those above me gives me confidence, and the quality of my wrestling has been good," said Daieisho, who had surgery on his right elbow after September's tourney. "I've been able to use it without any problem. I really feel I've gotten stronger."

He started the day tied with 35-year-old Akiseyama, who had made an improbable 6-0 run to start the tournament after a career spent largely in the lower tiers. The journeyman underdog, however, met his match on Saturday against former sekiwake Ichinojo (5-2).

The mountainous 198-kilogram Ichinojo, fighting as a No. 12 maegashira, shoved the No. 16 backward from the jump and then yanked him down to his first loss. Akiseyama is tied with ozeki Shodai for second, one win back of the leader.

The two demotion-threatened ozeki, Asanoyama and Shodai, were victorious on Day 7. Both need eight wins to avoid dropping to sekiwake.

Asanoyama improved to 4-3 in a sloppy effort against winless No. 3 Kotoshoho. Asanoyama seized control on the initial charge but ended up dragging his opponent from one side of the ring to the other before finishing him off.

Shodai remained hot on Daieisho's heels at 6-1 with a solid win against No. 3 Onosho (4-3), driving him back with his charge and then relentlessly pursuing him from the ring without any sign of concern about the left ankle he hurt in November.

"I feel no discomfort, no pain when I go forward," Shodai said. "I hope I can maintain this condition until the end of the tournament."

"I feel I can't be beaten, and I really don't want to be beaten," he said. 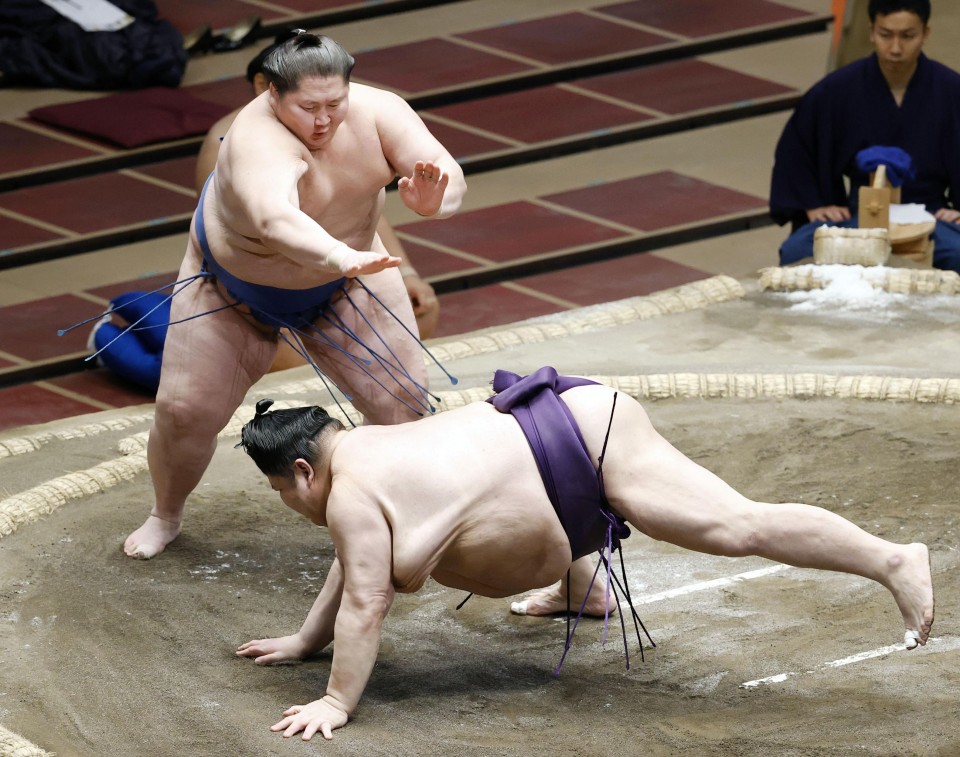 Ichinojo (top) sends Akiseyama to his first loss on the seventh day of the New Year Grand Sumo Tournament at Ryogoku Kokugikan in Tokyo on Jan. 16, 2021. (Kyodo) ==Kyodo

Takakeisho (2-5), who entered the tournament with a shot at promotion to yokozuna, flashed his old form by pushing out Georgian No. 4 Tochinoshin (2-5) in routine fashion. In the day's final bout, Takakeisho's quick charge knocked the former ozeki off balance and he never recovered.

Sekiwake Terunofuji hoisted komusubi Mitakeumi (2-5) over the straw for his fourth win, while komusubi Takayasu also improved to 4-3 when his opponent, No. 1 Hokutofuji, lost his footing under pressure and crashed to his fifth loss.

No. 7 Meisei, who started the tournament with a 5-0 record, suffered his second straight loss as popular No. 5 Endo (4-3) ended their bout with a frontal force out.

Yokozuna Hakuho is absent from the tournament after testing positive for the coronavirus, while fellow grand champion Kakuryu is out due to lower-back trouble.

The tournament, the first to be held by the Japan Sumo Association during a state of emergency, is missing 65 wrestlers due to coronavirus-related issues, with 15 of those coming from the elite makuuchi division and the second-tier juryo division.