Ozeki Takakeisho pulled out of the New Year Grand Sumo Tournament on Tuesday following a run of poor results that wiped out his bid for promotion to the sport's highest rank of yokozuna.

According to his stablemaster Tokiwayama, the 24-year-old Takakeisho injured his ankle on Day 3 of the 15-day meet at Tokyo's Ryogoku Kokugikan, when he lost to No. 1 maegashira Hokutofuji. 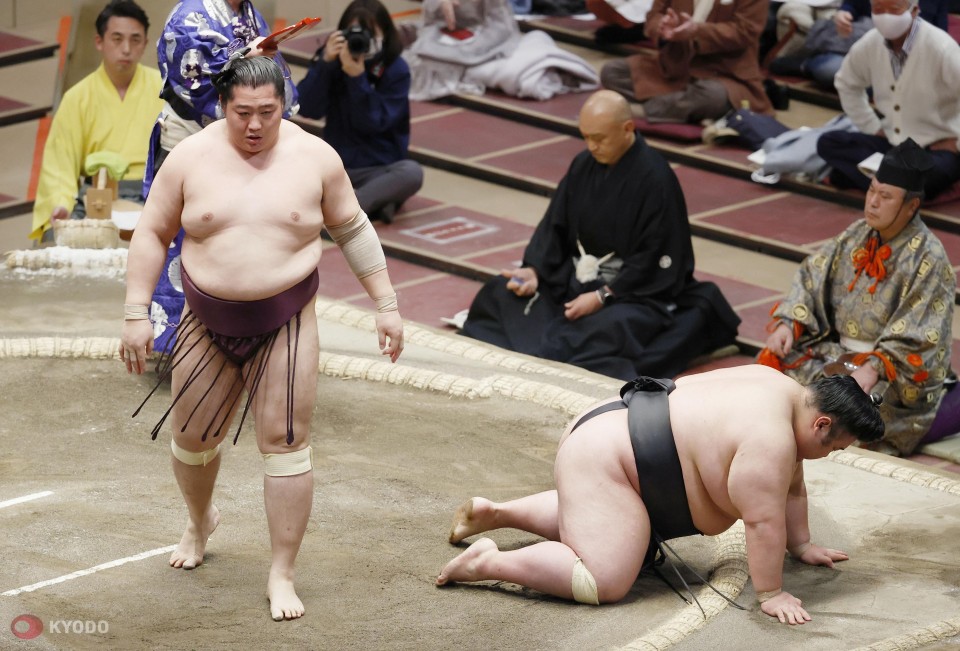 Takakeisho (R) is sent to his seventh defeat at the hands of Endo on the ninth day of the New Year Grand Sumo Tournament in Tokyo. (Kyodo)

Having won his second top-division title in November, Takakeisho made a nightmare 0-4 start to his "tsunatori" tournament, in which yokozuna promotion is at stake. An ozeki can move up from sumo's second-highest rank by winning two straight championships.

After logging two wins and seven losses through Day 9, Takakeisho will go into his next meet as a demotion-threatened "kadoban" ozeki and must post a winning record to keep his rank.

Takakeisho's withdrawal brings the number of absentees in the top two divisions to 17, the highest since World War II. It is the sixth time in his career that Takakeisho has missed all or part of a grand tournament.

The meet is the first to be held during a state of emergency, which has been declared for the Japanese capital and several other prefectures following a spike in coronavirus infections.

A number of stables have pulled out all of their wrestlers because of the virus. A total of 65 wrestlers had withdrawn by the opening day.

Both grand champions, Hakuho and Kakuryu, have also pulled out of the New Year meet. Hakuho tested positive for the coronavirus in the lead-up to the event, while Kakuryu withdrew on the opening day, citing lower back pain.