Painstaking preparation is in progress in Japan ahead of the planned rollout of coronavirus vaccinations by late February, with authorities holding a test run at a local gymnasium in Kawasaki where nurses simulated inoculations of volunteers.

The drill involving some 60 people, each wearing a bib bearing the name of the role they are playing such as "doctor" and "person to be vaccinated," was held Wednesday in the city with a population of 1.5 million adjoining Tokyo. 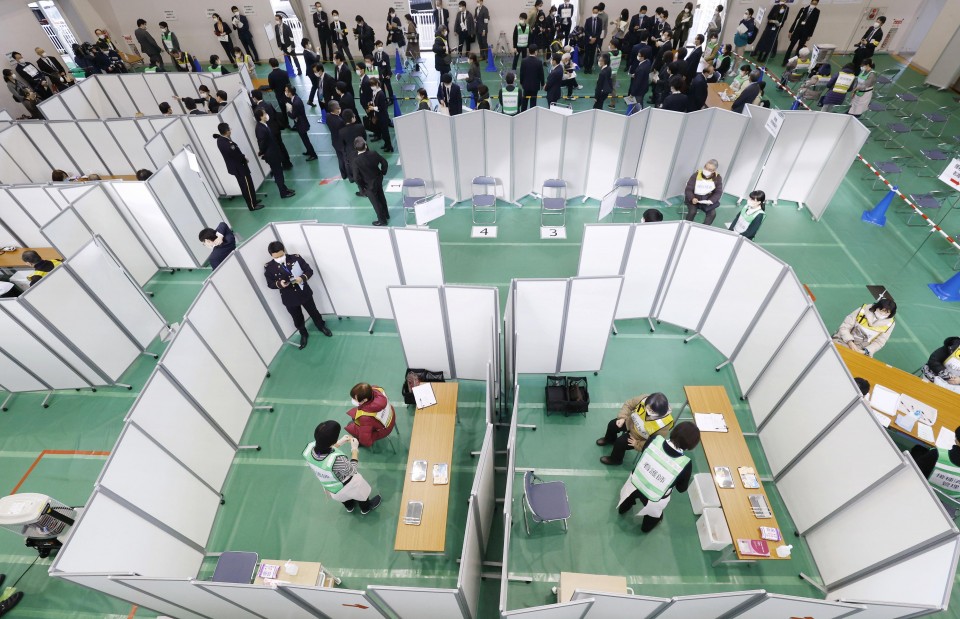 A coronavirus vaccination simulation is held at a university gymnasium in Kawasaki near Tokyo on Jan. 27, 2021. (Kyodo) ==Kyodo

The simulation was aimed at helping create a model for local government officials to use across the nation in their massive impending community vaccination drives.

Social distancing measures were in place in the gym, with partitions set up to separate participants. The people undergoing mock vaccinations were asked to stay in the building for 15 to 30 minutes after they had received the shot as a precaution should they experience any serious allergic reaction.

"I heard it took some extra time when holding a pre-vaccination consultation (with doctors)" in the simulation, said Taro Kono, minister in charge of vaccination efforts, after the event was held by the health ministry in collaboration with Kawasaki authorities.

The mock vaccination targeted a rapid pace -- inoculating 30 people per hour -- as the city hopes roughly 200 people a day can get a jab in a venue of a similar size. That is feasible if local officials can handle 30 people every hour and continue it for seven hours.

The test run progressed smoothly and at its target pace, except for the consultation stage. Officials realized applicants could ask doctors random questions, including about possible side effects, or express anxiety about their chronic diseases, slowing the process. 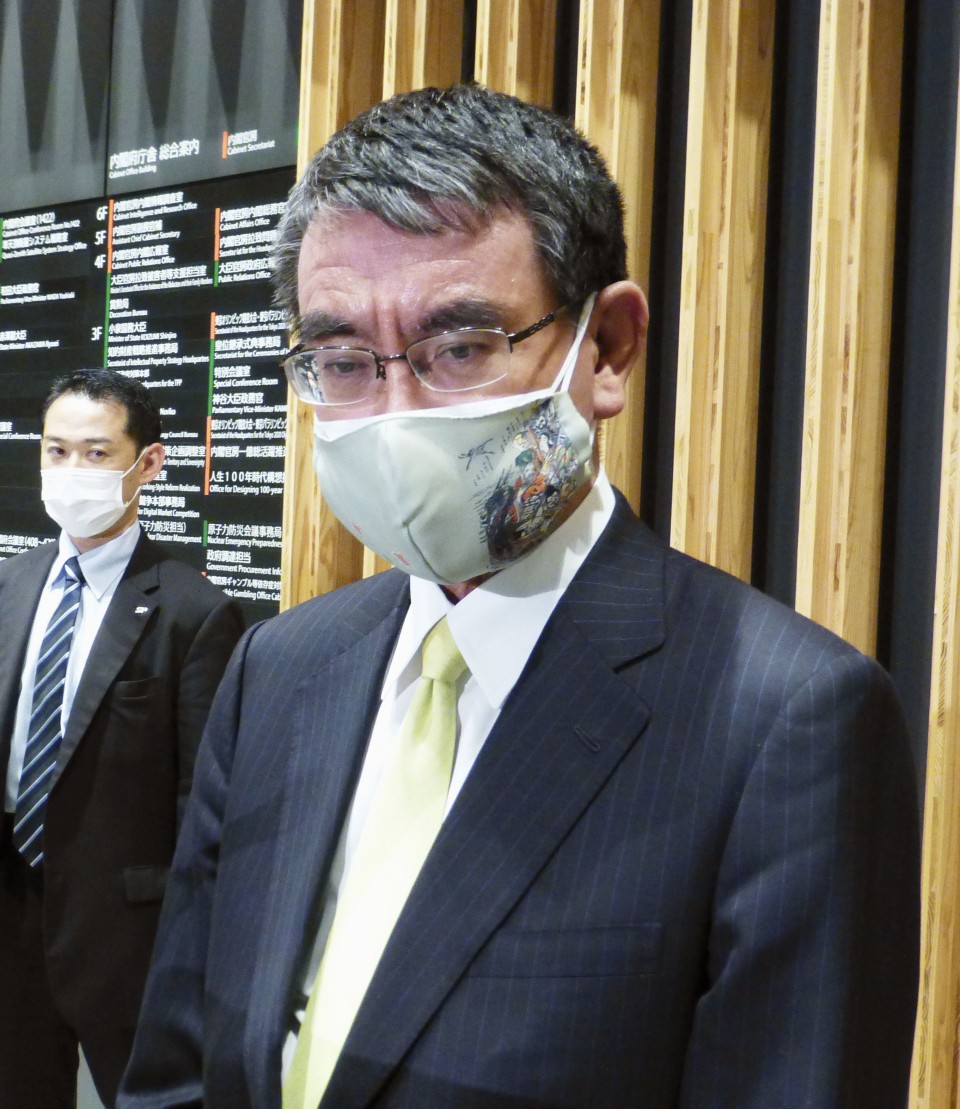 Japanese administrative reform minister Taro Kono speaks to reporters in Tokyo on Jan. 27, 2021, after holding online talks with prefectural governors on Japan's coronavirus vaccination efforts, which he is tasked with leading. (Kyodo) ==Kyodo

Kono, who also serves as administrative reform minister, revealed Thursday the government is now considering having local governments enclose a medical questionnaire when mailing a vaccination ticket to residents. The plan is apparently aimed at avoiding congestion at vaccination venues by asking residents to fill in the form beforehand.

The health ministry also plans to share a video of the Kawasaki simulation with local governments across the country so they can better prepare their own vaccination centers.

That is more than enough to cover Japan's entire population of 125 million people.

Medical workers are expected to be eligible for vaccinations first, followed by people aged 65 or older, then people with pre-existing conditions and those caring for the elderly.

The Pfizer vaccine, the only one already under review by the health ministry, is expected to gain approval on Feb. 15 when the ministry holds a panel meeting, sources close to the matter said earlier this month.

When the U.S. company asked the Japanese ministry to approve its novel coronavirus vaccine on Dec. 18, health minister Norihisa Tamura said his ministry "is unable to approve it" unless it can determine the results of a clinical trial that began October in Japan with around 200 Japanese participants, demonstrating Tokyo's commitment to safety.

The government is likely taking a cautious approach due to Japanese people's history of distrusting vaccines and being wary of potential side effects, meaning establishing a trouble-free process and conducting thorough trials will increase the likelihood of wider take-up.

Prime Minister Yoshihide Suga said on Jan. 4 that full results of the trial, undertaken by Pfizer's Japanese subsidiary, are "expected by the end of this month as a result of a strong request made by the Japanese government to its U.S. headquarters."

Pfizer Japan Inc. initially planned to submit the test results to the health ministry "by February."

While the central government is in charge of procuring vaccines, inoculations will be left to local governments.

Local officials are wary whether they can secure suitable sites for vaccinating a large number of people.

"If (a venue) is too small, it will risk creating a crowd," said Noboru Sakamoto, president of Kawasaki City College of Nursing whose gym was used for the simulation. "A venue for vaccination will be used at least six months, meaning elementary, middle or high school gyms cannot be used because students need them every day."

As the resurgence in coronavirus cases since November in Japan has strained the country's medical system, local governments fear they may not have enough doctors and nurses to work at vaccination sites.

A plan recently surfaced within the central government to dispatch medical students to the venues to cope with a shortage in staff, only to be dismissed after meeting opposition from the education ministry, government sources said.

The health ministry was also critical, with one ministry official saying, "It's ridiculous. Who will take responsibility if a problem occurs?"