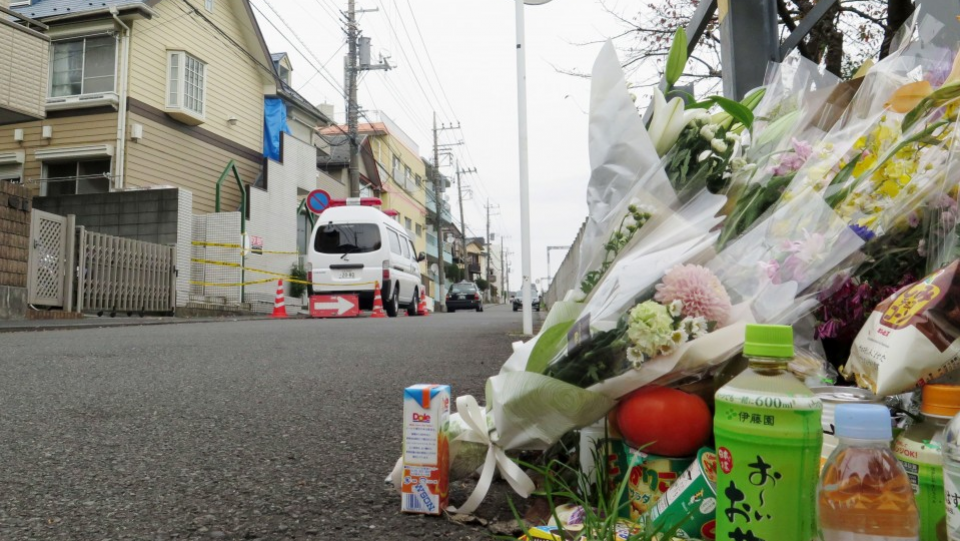 Flowers and drinks are seen on Nov. 20, 2017 on a street near the apartment complex in Zama, near Tokyo, where nine dismembered bodies were found in late October at the home of suspect Takahiro Shiraishi. (Kyodo) ==Kyodo

TOKYO - A Japanese court on Tuesday sentenced a man dubbed Japan's "Twitter killer" to death for the 2017 serial murders of nine people who posted suicidal thoughts on social media.

Takahiro Shiraishi, 30, was found guilty in the high-profile case by the Tachikawa branch of the Tokyo District Court of murdering, dismembering and storing the bodies of the nine in his apartment near Tokyo.

Presiding Judge Naokuni Yano ruled that the nine victims did not consent to being killed, and that Shiraishi was mentally fit to be held responsible for the murders.

"The viciousness of the crimes was on a level rarely seen in Japan's history. In a society where social media is deeply rooted, they have shaken people to the core," the presiding judge said.

Whether Shiraishi killed the victims, eight women and a man ranging in age from 15 to 26 from Tokyo and four other prefectures, with their consent was the major point of contention in the lay judge trial.

Wearing black-rimmed glasses, a white mask and the same yellow-green outfit, provided while in detention and which he had worn since his first hearing, Shiraishi remained calm as the ruling was handed down.

Prosecutors had sought a death sentence for Shiraishi, who pleaded guilty to the crimes, but defense lawyers had argued that he was guilty only of the lesser charge of homicide with consent as he had his victims' tacit approval based on messages they sent to him.

While prosecutors argued there was no way the victims consented to being killed based on Shiraishi's testimony that they resisted when being strangled, the defense team argued that they only did so due to their "conditional reflexes."

Accepting the credibility of Shiraishi's testimony, the court ruled, however, that the resistance of the victims did not provide definitive proof of a lack of consent.

At a witness examination held on Oct. 7, the mother of a 21-year-old victim said, "I believe my daughter did her best to live."

The case has stunned many in Japan, prompting the central government and social networking services to boost support for young people in need of help.

The defense also claimed that Shiraishi was possibly either mentally incompetent or was in a state of diminished capacity at the time of the murders.

But prosecutors concluded he could be held criminally liable after he was put through five months of psychiatric testing before his indictment in September 2018.

According to the ruling, Shiraishi strangled and dismembered his victims. He sexually assaulted all of the female victims.

He is believed to have promised to help his victims die via Twitter, using his handle that loosely translates as "hangman," inviting them to his apartment in Zama, Kanagawa Prefecture, after they expressed suicidal thoughts.

"(The murders) were self-centered acts committed with the aim of monetary gain and sexual satisfaction. To lure victims who were mentally weak can only be called cunning and despicable," Yano said.

Although Shiraishi had already declared he would not appeal even if he received a death sentence, his defense lawyers said after the ruling they were considering lodging an appeal on his behalf.

The serial killings first came to light in October 2017 when police officers visited Shiraishi's apartment and found several coolers containing body parts during their search for a missing 23-year-old Tokyo woman, who later turned out to be one of the victims.