Less than a month before the swearing-in ceremony in Washington for U.S. President-elect Joe Biden, hundreds of Japanese, including adherents of the QAnon conspiracy theory, are taking to the streets in support of President Donald Trump's claim that he won the election.

"Stop biased reporting" and "Admit (the U.S. presidential election) was rigged" were among slogans shouted in unison by more than 200 Trump supporters during a rally held at Hibiya Park in central Tokyo in late November. 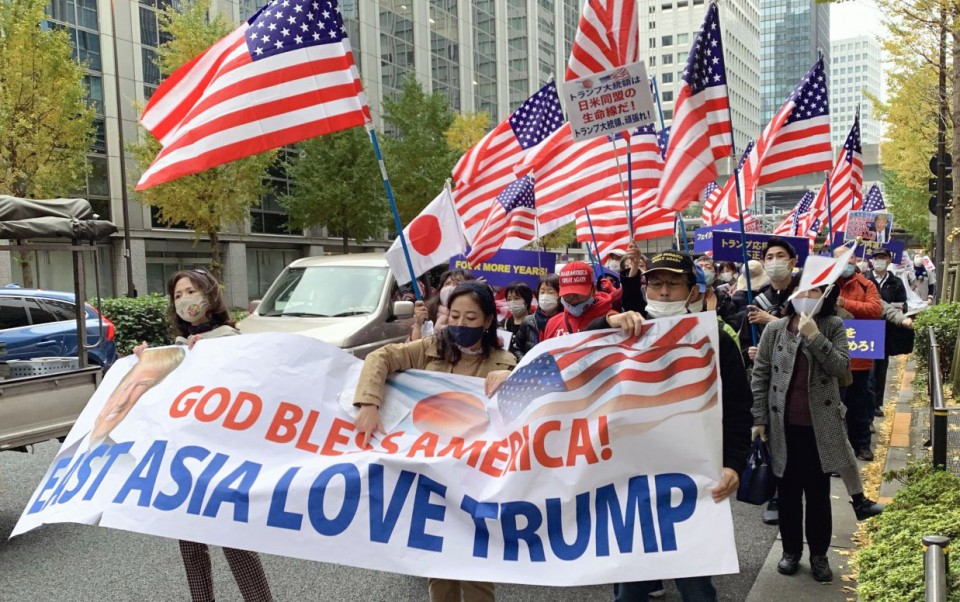 Some of them were speaking in Chinese, saying, "Trump is the only person who can resist (Chinese) President Xi Jinping."

The Trump supporters in Japan continued organizing events during the holiday season, with a group that calls itself "people who love President Trump" holding a rally outside the prime minister's office in Tokyo on the night of Christmas Eve. One participant was dressed as Santa Claus and others were wearing red "Make America Great Again" caps.

QAnon, a pro-Trump internet conspiracy theory, is still thriving and said to have garnered followers in more than 70 countries.

Seven QAnon adherents in Japan, including a self-employed person and a delivery service worker, spoke with Kyodo News on condition of anonymity in mid-December. Although none of them took part in the Hibiya Park rally, they said they consider themselves "journalists protecting freedom of speech."

"Society is under the control of a small number of elite people," said a woman in her 50s who lives in Gunma Prefecture, eastern Japan.

"Middle-aged women who have been oppressed have woken up to it," she added.

A man in his 40s said he believes Trump will eventually prevail. "It's possible that big information, which could overthrow (the election outcome), will come out," he said.

They said the number of QAnon adherents has grown in Japan this year and stands at more than 100 people at present. 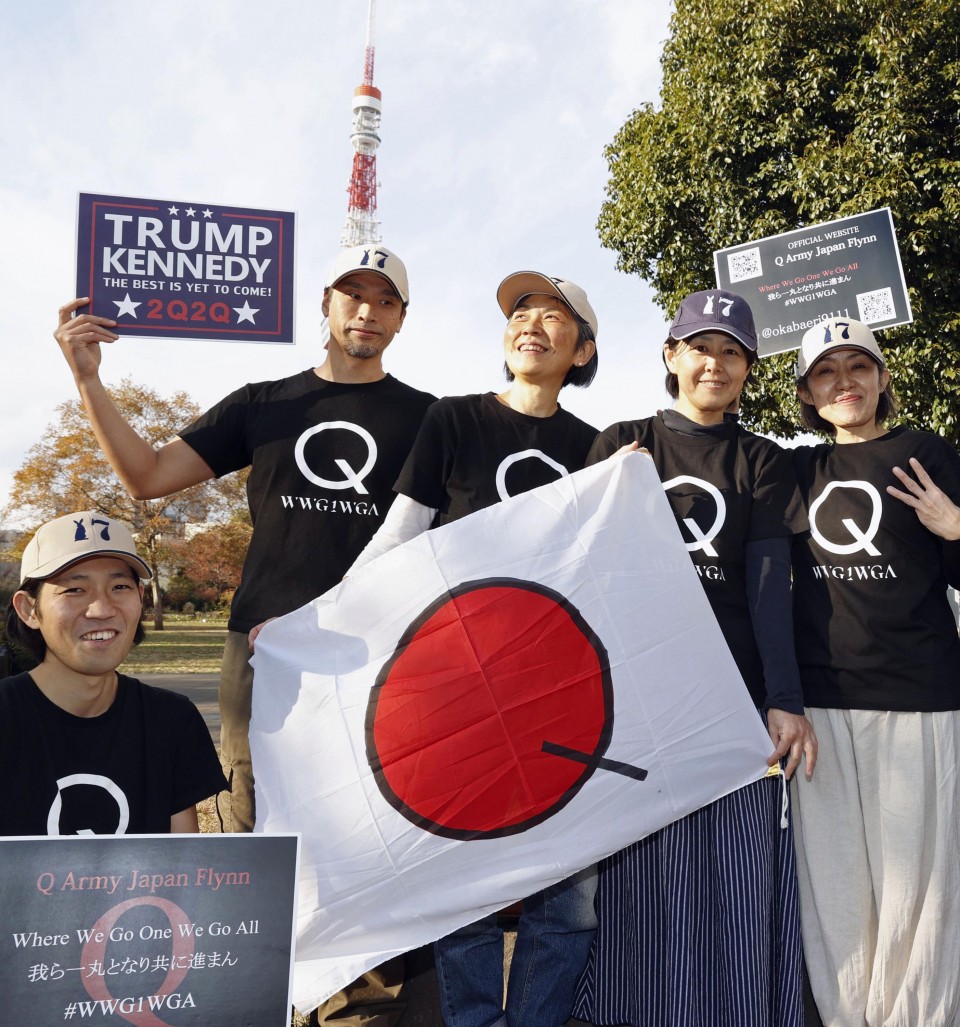 Adherents of the QAnon theory pose for a photo holding a flag combining the letter "Q" and the Japanese flag in Tokyo on Dec. 15, 2020. (Kyodo)

QAnon supporters are known to believe that prominent U.S. Democrats are part of a satanic pedophile ring and that Trump is a savior who is fighting evil.

In addition, they believe the ongoing coronavirus pandemic is man-made as was the March 2011 earthquake and tsunami that triggered the Fukushima nuclear crisis.

The Japanese followers said the purpose of their activities is to "awaken people to hidden truths" and they recently started to hold in-person gatherings.

Yasushi Watanabe, a professor at Keio University and expert on American studies, said it is no wonder that Trump looks dependable to some people in Japan at a time "when the notion of Japanese being homogenous is no longer shared and the term 'jokyu kokumin' (privileged citizens) has come into existence as a target of hatred."

The term became widely used following high-profile criminal cases involving top bureaucrats, including a 2019 car accident in Tokyo that killed a woman and her young daughter.

Kozo Iizuka, an 89-year-old former chief of the now-defunct Agency of Industrial Science and Technology, was indicted over the accident without arrest in February, triggering a public outcry that he had received preferential treatment due to his former government position.

A now-suspended Twitter account, which had been posting Japanese translations of QAnon-related information originated in the United States, had more than 80,000 followers.

"If we simply condemn (QAnon supporters), they will take it as a suppression of their activities and give their activities a cause," Watanabe said. "We should humbly approach (the phenomenon) and ponder why there are people who start believing in conspiracy theories."