Months after the coronavirus outbreak aboard the Diamond Princess cruise ship berthed in Japan cast a dark shadow on the cruise industry, some cruise lines have recently launched roundtrip cruises with no port calls dubbed "cruises to nowhere" in Singapore.

But the undertakings are buffeted by the virus raging around the world and a COVID-19 scare that forced one of these cruises to turn back last week, underscoring the risks and challenges of trying to revitalize an industry badly hit during the pandemic. 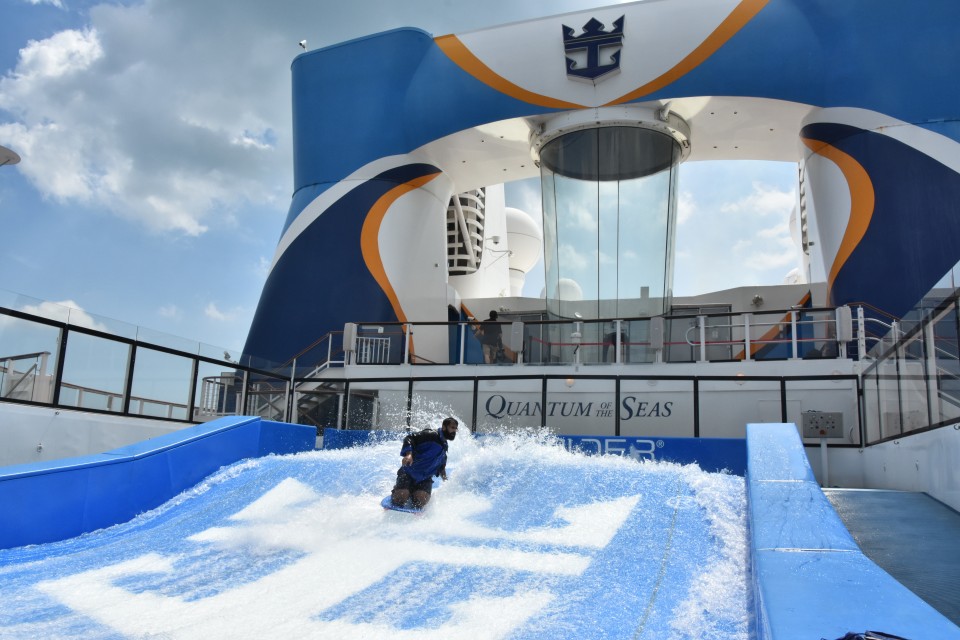 A surf simulator on the Quantum of the Seas, a Royal Caribbean cruise ship, is shown during a media tour at the Marina Bay Cruise Centre Singapore in Singapore on Dec. 3, 2020. (Kyodo)

The Quantum of the Seas, a cruise ship operated by U.S.-based Royal Caribbean International, sailed from Singapore on Dec. 7 on a four-day voyage carrying 1,680 passengers and 1,148 crew. But on Day 3, it returned to the city-state after a passenger tested positive for the virus on board the ship.

But subsequent tests by Singapore's National Centre for Infectious Diseases found the passenger to be negative for the virus.

Royal Caribbean and Genting Cruise Lines are two cruise lines that were recently permitted by the Singapore government to operate cruises to nowhere in international waters off Singapore under a pilot program aimed to revitalize the cruise industry.

Last year, 414 cruise ships called at Singapore's ports with a passenger throughput of about 1.8 million, up from 1.1 million in 2009.

But its ambitions hit a snag with the cruise industry all over the world grinding to a halt as national governments put in place border controls and travel restrictions to prevent the spread of the virus.

At the height of outbreaks in the city-state, some cruise ships were even used as temporary accommodation for migrant workers who had recovered from COVID-19.

As virus cases in Singapore tapered off, the Singapore Tourism Board in October unveiled the cruises-to-nowhere program for Singapore residents with strict safeguards in place to avert any outbreak of the virus, including requiring virus tests for all passengers before boarding.

Royal Caribbean, while extending the suspension of voyages globally for its fleet until February and some until April, put the Quantum of the Seas into use under the program in December, making it the first ship in its worldwide fleet of 26 to be reactivated during this pandemic.

Genting Cruise Lines also launched similar cruises with its World Dream cruise ship in November, with more than a dozen cruises conducted so far. Its first cruise under the program attracted 1,400 guests. 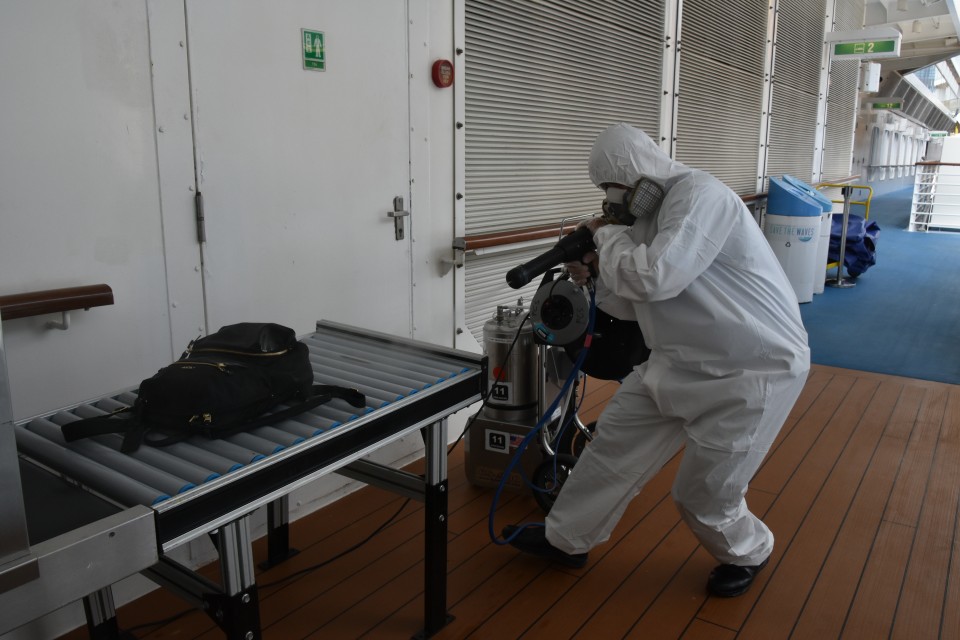 A worker sanitizes a reporter's backpack on the Quantum of the Seas, a Royal Caribbean cruise ship, during a media tour at the Marina Bay Cruise Centre Singapore in Singapore on Dec. 3, 2020. (Kyodo)

"The responses and enquiries continue to be very positive and we remain highly optimistic of the growing demand during the school and festive year-end holidays," said Michael Goh, president of Dream Cruises and head of international sales at Genting Cruise Lines, in an email.

Under the program's safety guidelines, the number of passengers each ship can carry is capped at 50 percent of capacity. Social distancing measures implemented on shore in Singapore must also be observed, including mask-wearing in public places, a five-person limit on gatherings. Each passenger must carry an electronic contact tracing device.

Upon returning to port, passengers must take a rapid antigen test.

"I think the situation has changed incredibly (since the Diamond Princess) because we had six months of observing and learning," said Angie Stephen, Royal Caribbean's Asia-Pacific managing director.

"When those incidents happened early on, no one really knew anything about how COVID-19 spread," she said during a media tour aboard the cruise ship earlier this month, adding that safety procedures used for the company's cruises from Singapore "will be a template for what will be applied across the fleet."

Cruises to nowhere were popular in Singapore, particularly as floating casinos, before the city-state introduced two so-called integrated resorts with casinos, including the towering Marina Bay Sands.

Cruises to nowhere during this pandemic have attracted interest as a floating resort that is replete with high-tech and theme park-type family entertainments with social distancing measures in place to ensure guests' safety.

A 45-year-old banker who identified himself as Shajid took a Royal Caribbean cruise with his wife and two teenage children in early December.

"Every year we used to go for a tour. This year we thought we may not be able to go anywhere, so this is a good thing," he said as he and his family arrived at the Marina Bay cruise terminal to board the ship.

After what appeared to have been a false alarm during the Royal Caribbean cruise, the tourism board said it will "continue to monitor the outcomes of the pilot sailings in the coming months before deciding on the next steps for cruises."

Royal Caribbean has planned big on its cruise business in Singapore by inking a five-year multimillion-dollar deal with the government in November last year.

The deal, aimed at promoting a cruise and flights as one convenient package, was expected to attract some 623,000 foreign visitors to Singapore and generate over S$430 million (US$322 million) in tourism receipts between the end of 2019 and 2024.

In October, the Straits Times newspaper conducted an online poll of more than 1,000 readers on whether they think it would be safe to go on the two cruises approved by the government. The unscientific poll showed they were essentially split, with 51 percent expressing support and 49 percent taking the opposite view. 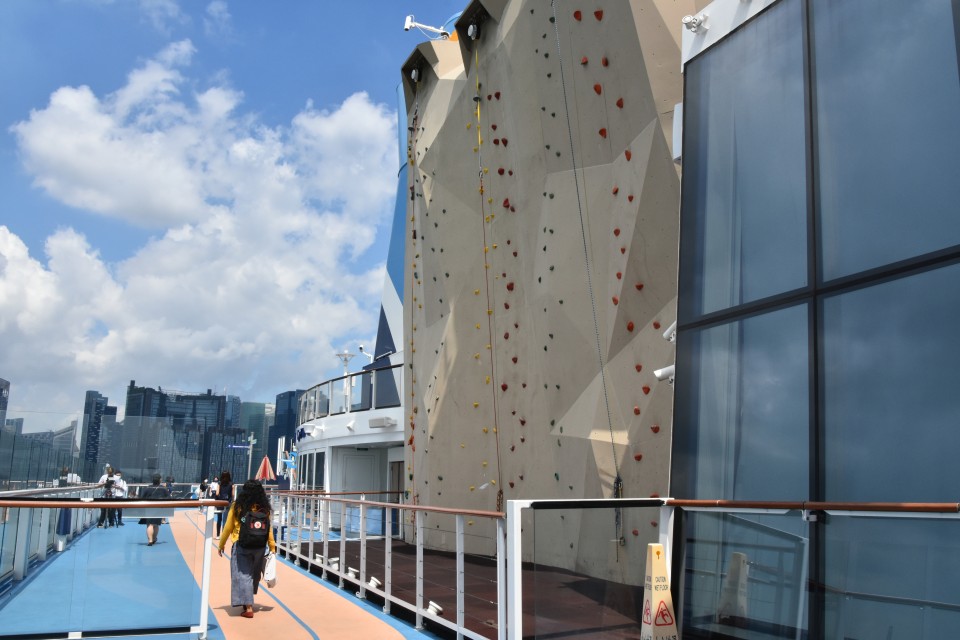 A rock climbing wall on the Quantum of the Seas, a Royal Caribbean cruise ship, is shown during a media tour at the Marina Bay Cruise Centre Singapore in Singapore on Dec. 3, 2020. (Kyodo)