The government plans to dispatch more than 10 nurses from the Self-Defense Forces to Osaka and Asahikawa, Hokkaido, as the two regions are facing a shortage of health care workers amid a resurgence in coronavirus infections, officials said Monday. 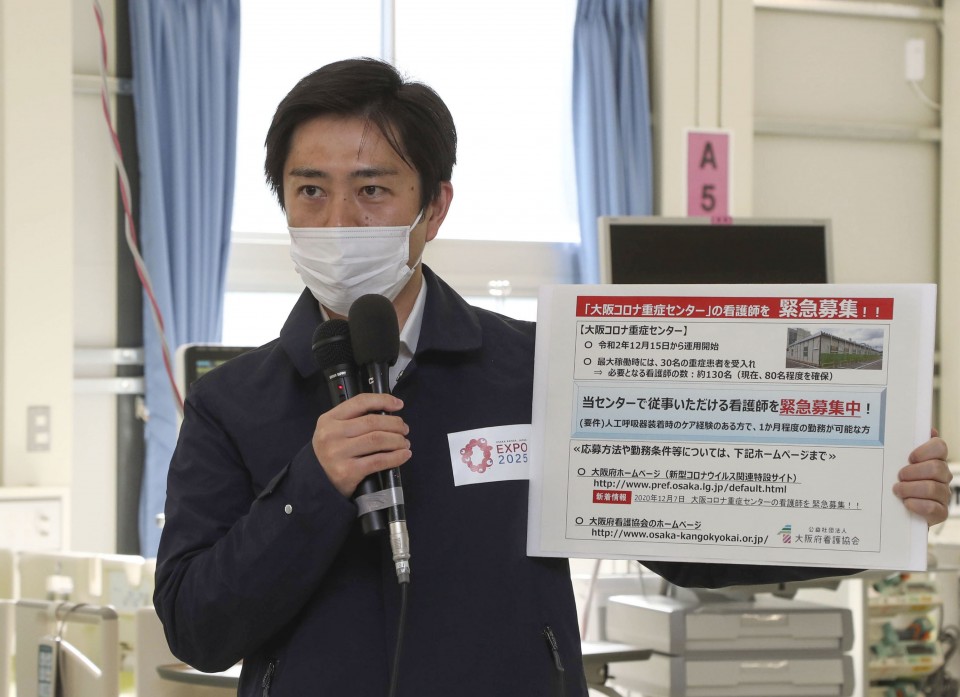 Osaka Gov. Hirofumi Yoshimura meets the press in the city of Osaka on Dec. 7, 2020, after inspecting a new medical facility for serious coronavirus cases. (Pool photo)(Kyodo)

The development came after Prime Minister Yoshihide Suga told a meeting of government and ruling bloc officials that "arrangements are being made to dispatch (SDF medical staff) as soon as possible upon requests from local governments."

Similarly, Defense Minister Nobuo Kishi told Osaka Gov. Hirofumi Yoshimura that his ministry is ready to send several nurses to a temporary medical facility for COVID-19 patients to be opened in the western Japan city next week, according to the governor.

The Defense Ministry has been assisting local governments in their response to the pandemic based on requests from governors, sending SDF personnel to places such as Okinawa, where the health care system was strained in August.

SDF members were also deployed between February and March to disinfect the inside of the Diamond Princess, a cruise ship that was quarantined in Yokohama near Tokyo, and support other relief efforts.

Osaka, which reported 228 new cases of the virus on Monday, had seen more than 300 daily coronavirus infections for six consecutive days through Sunday.

A record 141 serious cases were confirmed as of that day, with 68.4 percent of the 206 beds reserved for such patients in the prefecture already occupied.

As for Hokkaido, which on Monday reported 123 new infections and six deaths, Asahikawa Mayor Masahito Nishikawa told a news conference he has requested that the government of Japan's northernmost main island push the central government to dispatch 10 SDF nurses to the city.

The Hokkaido government plans to file the request with the central government soon.

The city of Asahikawa has recently seen a series of cluster infections, including at some of its main hospitals. The city, which has seen 40 deaths of COVID-19 patients so far, has around 60 percent of its hospital beds occupied by such patients.

Meanwhile, the Osaka prefectural government has raised its virus alert level from "yellow" to "red," meaning the prefecture is facing an emergency situation, for the first time since the system was implemented in May, and has asked residents to refrain from nonessential outings until Dec. 15.

On Monday, Yoshimura inspected the new medical center to accommodate patients showing serious coronavirus symptoms and ease the strain on hospitals in the prefecture.

It will open Dec. 15 within the premises of the prefectural government-sponsored Osaka General Medical Center in the city's Sumiyoshi Ward with 30 beds equipped with ventilators. It plans to add 30 more beds in the future.

Unable to secure around 130 nurses to provide care for 30 patients at the new facility, the Osaka government has called on the central and other local governments to send some of their health care workers to help.

The new facility has secured the 20 doctors necessary to start operation, but it still needs about 50 more nurses.

The National Governors' Association said Monday that 26 nurses from 13 prefectures, including Kyoto and Akita, would be dispatched to assist Osaka's fight against COVID-19, the respiratory disease caused by the novel coronavirus.

To ensure that there will be enough health care workers to treat COVID-19 patients during the New Year's holidays, Yoshimura said the Osaka government will provide hospitals that accommodate new coronavirus cases with 200,000 yen ($1,900) per person between Dec. 29 and Jan. 3.

Tokyo Gov. Yuriko Koike said Monday that the capital does not currently require the dispatch of SDF nurses.