Japan is considering stepping up discussions on ways to secure a stable imperial succession by establishing an advisory panel to solicit views from experts on the issue, government and ruling party sources said Friday.

The plan is part of the government's efforts to address concerns that the imperial household could run out of heirs in the not-so-distant future, as conservative lawmakers and academics seek to maintain male-only succession rules while the public widely supports allowing women to ascend the throne. 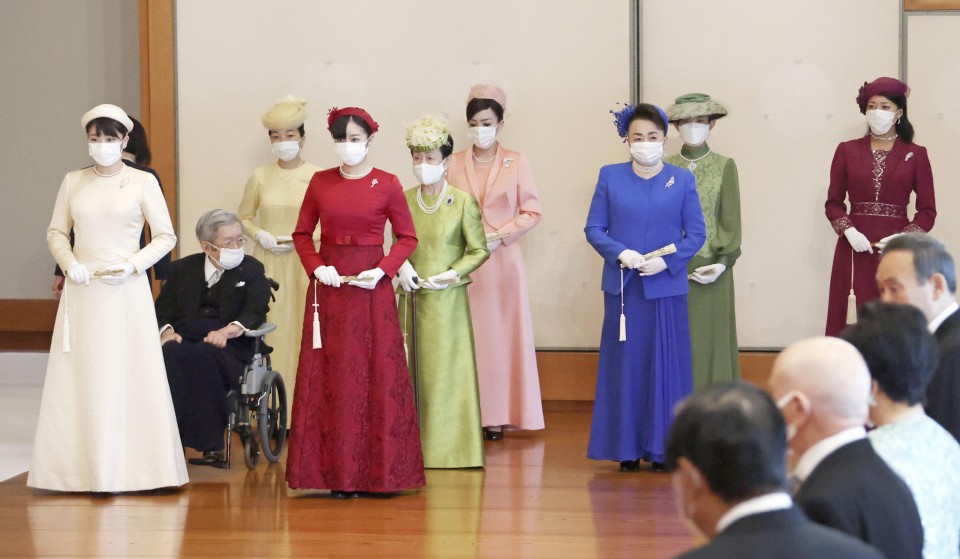 Japanese imperial family members attend a ceremony at the Matsu no Ma stateroom of the Imperial Palace in Tokyo for the formal declaration of Crown Prince Fumihito as the first in line to the Chrysanthemum Throne on Nov. 8, 2020. The ceremony, part of the "Rikkoshi no rei" rituals, had been postponed for seven months due to the novel coronavirus pandemic. (Pool photo) (Kyodo) ==Kyodo

There are only three males in line to succeed 60-year-old Emperor Naruhito -- his younger brother Crown Prince Fumihito, 55, the crown prince's son Hisahito, 14, and the emperor's uncle Prince Hitachi, 85.

The emperor and Empress Masako have a 19-year-old daughter, Princess Aiko, but under the Imperial House Law women cannot ascend the Chrysanthemum Throne.

At a press conference on Friday, House of Representatives Speaker Tadamori Oshima said he hopes the government will now give "solemn consideration" to what can be done to realize a stable imperial succession.

It remains unclear when the discussions will speed up. The government will likely seek to prevent the imperial succession from becoming a divisive issue in the next lower house election, which will be held sometime by October 2021.

Parliament in 2017 called on the government to promptly hold discussions on how to achieve a stable imperial succession and report its conclusion, without setting a deadline.

Prime Minister Yoshihide Suga's administration had said it would do so after ceremonies in November to proclaim the crown prince's rise to first in line to the throne.

A similar advisory panel that was set up for the abdication of former Emperor Akihito consisted of six members from academia and the private sector. They solicited views from a total of 20 experts over the course of six months and presented their findings to the government.

Public opinion overwhelmingly supports allowing women to ascend the throne, with a Kyodo News poll conducted in March and April this year showing 85 percent of respondents in favor of it.

The Imperial House Law, enacted in 1947 after the end of World War II, requires a paternal line of succession from the emperor to the next eligible man, but 79 percent of those surveyed were in favor of abandoning the stipulation.

But conservatives in the ruling Liberal Democratic Party are reluctant to make significant changes to the imperial succession, and government sources say it is increasingly becoming difficult to reach a consensus on the matter.

According to the sources, Suga's administration has already conveyed such concerns to Oshima and House of Councillors President Akiko Santo.

If the government chooses to avoid making any decision, the focus is expected to turn to ways to alleviate the burden of official duties on a shrinking pool of imperial family members.

These will likely include delegating official duties to women who have lost their royal status after marrying a commoner, and allowing them to head their own branches of the imperial family.