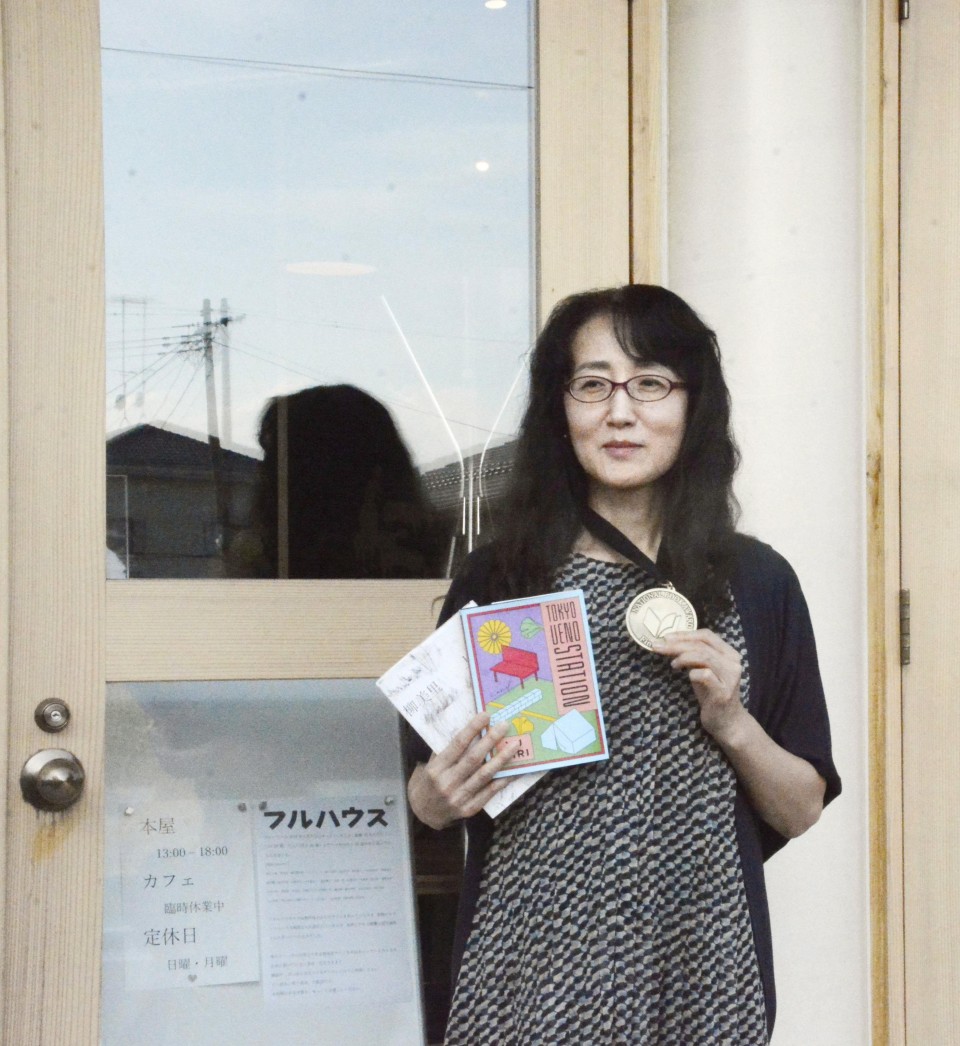 Japanese-born Korean writer Yu Miri, who won this year's U.S. National Book Awards for Translated Literature on Nov. 18, 2020, for her novel "Tokyo Ueno Station," speaks during an interview in front of the book store she runs in Minamisoma, a Fukushima Prefecture city stricken by the 2011 nuclear disaster following a massive earthquake and tsunami. The novel depicts the life of the book's narrator Kazu, who left his family in Fukushima Prefecture to work as a laborer in the Japanese capital as it prepared for the 1964 Tokyo Olympics. (Kyodo) ==Kyodo

The novel, translated into English by Morgan Giles, depicts the life of the book's narrator Kazu, who left his family in Fukushima Prefecture to work as a laborer in the Japanese capital in the preparations for the 1964 Tokyo Olympics.

The National Book Awards website said the novel "is a welcome and necessary addition to the translated Japanese canon, which unfolds in the memories of a deceased narrator occupying the eponymous train station."

In an award ceremony held online, Yu, who is of Korean descent born in Japan, said she wants to share the prize with the people of Minamisoma in Fukushima -- a city stricken by the 2011 nuclear disaster where she currently resides and runs a book store.

"I am so happy...I would like to share this joy with the people of Minamisoma, who have been on the road of hardship since the earthquake, tsunami and nuclear disaster. This is for you all," Yu, 52, said.

Japanese literature has gained recognition from English-language audiences in recent years, as demand for translated novels increases from readers looking for more options.

In 2018, Japanese writer Yoko Tawada won the U.S. award in the translated literature category for her novel "The Emissary."

Tokyo Ueno Station sheds light on Japanese society through the eyes of the narrator, who lives in a vast homeless village in Ueno Park in central Tokyo.

Speaking at a press conference on Thursday, Yu suggested that the novel coronavirus pandemic has allowed readers to understand what the character was going through in the book.

"Due to the novel coronavirus outbreak, I believe (readers) were able to sympathize with people who were pushed aside in society," she said.

"I wonder how many people who heard the phrase 'stay home' (during the pandemic) actually thought of those who do not have homes."

Yu writes in Japanese and has won a number of Japanese literature awards, including the prestigious Akutagawa Prize in 1997 for "Kazoku Shinema" (Family Cinema). In 2015, she moved to Minamisoma, a city where many residents had been forced to evacuate after the quake and ensuing nuclear disaster.

"I hope this will be a gift to all of the local residents here," she said.

The novel was recommended by Time magazine in its article on "The 100 Must-Read Books of 2020," along with several other novels translated into English from Japanese, including "Earthlings" by Sayaka Murata and "Breasts and Eggs" by Mieko Kawakami.