Introducing his longtime adviser Antony Blinken, who was tapped as secretary of state, as well as others nominated for key posts, the 78-year-old former vice president said, "They embody my core belief that America is strongest when it works with its allies." 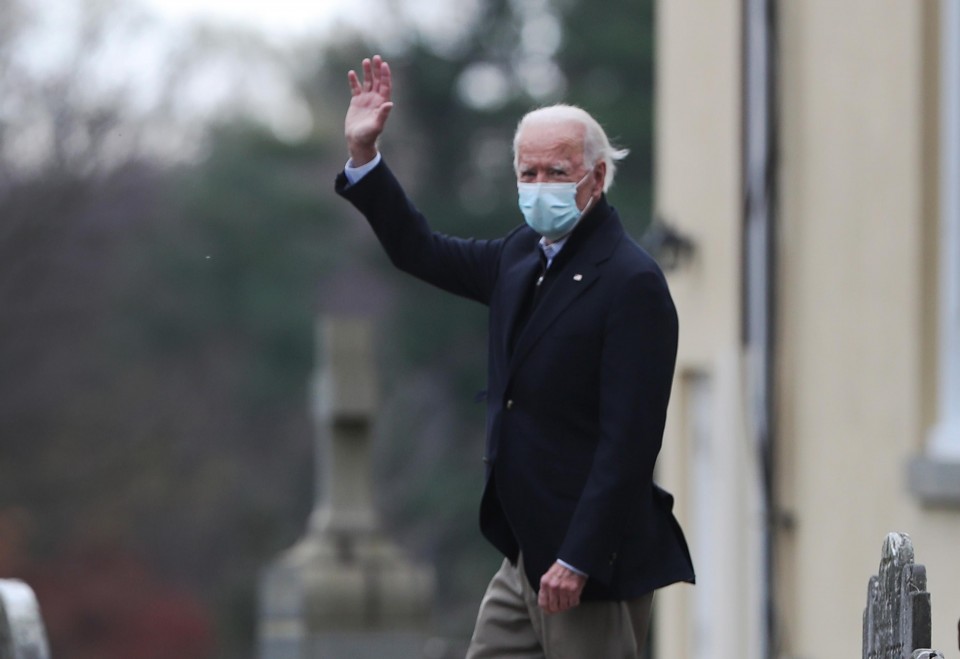 President-elect Joe Biden leaves after attending mass at St. Joseph on the Brandywine Roman Catholic Church on November 15, 2020 in Wilmington, Delaware. President Donald Trump tweeted that Biden won the election because it was rigged, seemingly for the first time acknowledging that Biden has won the race. He quickly deleted and revised the tweet to say, "He only won in the eyes of the FAKE NEWS MEDIA". (PHOTO NOT FOR SALE)(Getty/Kyodo)

"It's a team that reflects the fact that America is back. Ready to lead the world, not retreat from it, once again sit at the head of the table. Ready to confront our adversaries, not reject our allies. Ready to stand up for our values," Biden said in a speech delivered in his home state of Delaware.

The remarks came as Trump, 74, has faced criticism over the past four years for viewing traditional allies in terms of dollars and cents rather than as partners to pursue common interests and shared values.

Trump's "America First" policy, seen as a unilateralist approach, led to U.S. withdrawals from international agreements and institutions -- including the Paris climate accord and the World Health Organization -- as hindrances to the pursuit of U.S. interests.

"As the president-elect said, we can't solve all the world's problems alone. We need to be working with other countries, we need their cooperation," said Blinken, 58, during the event attended by Biden and other nominees who were announced Monday to play key roles in the incoming administration's foreign and security policy.

Former Secretary of State John Kerry, who has been named to serve as what Biden calls the first presidential envoy on climate, hailed the president-elect's pledge to recommit to the Paris accord "on day one," but also called for countries to rally to counter global warming.

"Even the United States, for all of our industrial strength, is responsible for only 13 percent of global emissions. To end this crisis, the whole world must come together," said Kerry, 76, known as a key architect of the landmark climate deal.

"At the global meeting in Glasgow one year from now, all nations must raise ambition together or we will all fail together. And failure is not an option," he added, referring to a planned U.N. climate change conference.

Jake Sullivan, another policy adviser to Biden and a former director of policy planning at the State Department, was selected as national security adviser, while Linda Thomas-Greenfield, a black woman and a former assistant secretary of state for African affairs, is eyed for the post of ambassador to the United Nations.

"My fellow career diplomats and public servants around the world, I want to say to you, 'America is back. Multilateralism is back. Diplomacy is back,'" said Thomas-Greenfield, who is returning to public service after retiring from a 35-year State Department career in 2017.

The heads of executive departments and some other high-ranking officials require Senate approval.