The city of Nagoya said Thursday it will ask stores that serve alcohol to shorten their operating hours to prevent the spread of the novel coronavirus, joining the ranks of Tokyo, Osaka and Sapporo amid growing unease of a resurgence in metropolises and record-breaking numbers across Japan.

The government of the northern main island of Hokkaido, which has been asking nightlife establishments not to operate between 10 p.m. and 5 a.m. since Nov. 7, also decided Thursday to extend the duration of its request to Dec. 11. The local government originally planned to lift the request Saturday.

The Aichi prefectural government said it will ask karaoke venues, hostess bars and host clubs in parts of Nagoya's Nishiki and Sakae districts not to operate between 9 p.m. and 5 a.m. from Sunday through Dec. 18. 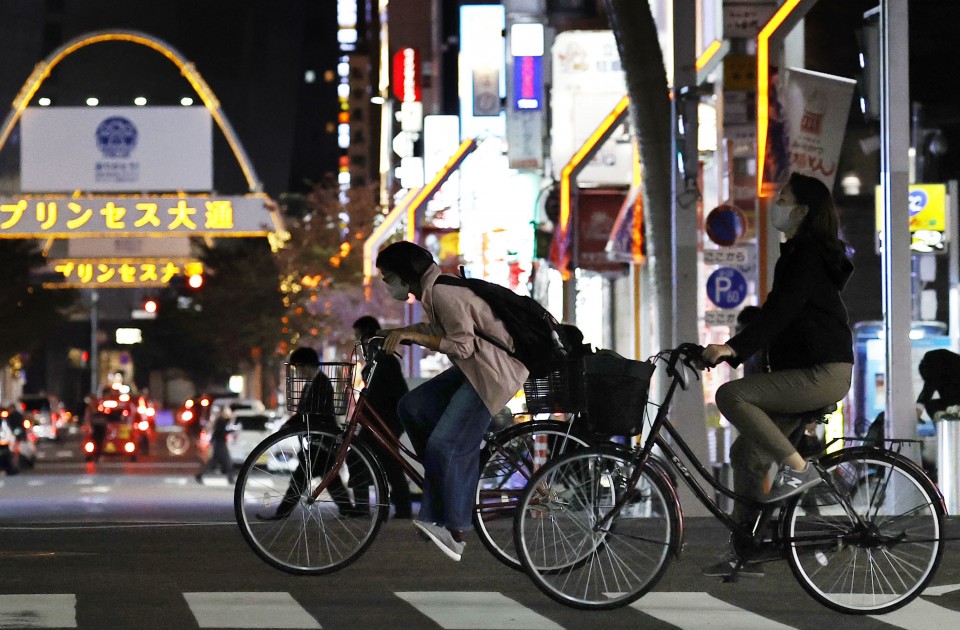 The local government will pay 20,000 yen ($192) per day in financial support to business operators that comply with the request.

Earlier in the week, the Osaka prefectural and Tokyo metropolitan governments made the request for restaurants and bars in their capital cities to close at 9 p.m. and 10 p.m., respectively, through mid-December.

The local governments' decisions to urge shorter times for such establishments in the four cities come after the central government's expert panel recommended that nightlife businesses cut their hours or close down for a few weeks and that movement of people to and from areas seeing growing infections be restricted.

On Thursday, daily infections reported for Tokyo remained high at 481 cases after it experienced over 500 cases over three straight days last week, rising to as high as 539 on Saturday.

The nationwide tally topped 2,500 on Thursday, the second highest on record after 2,592 were reported Saturday.

"We, as a nation, will continue to support all businesses that cooperate," he added.

Yasutoshi Nishimura, the minister in charge of Japan's virus response, noted during a press conference, "We may be looking at another state of emergency" for hard-hit areas if the government panel's virus alert for them is raised to the highest of four levels.

The number of people suffering severe COVID-19 symptoms in Tokyo rose from the previous day's 54 to 60 people, the highest level since a state of emergency declared over the pandemic was lifted in late May.

Tokyo Gov. Yuriko Koike on Wednesday expressed concern about the capital's trajectory and requested restaurants serving alcohol to shorten their operating hours from Saturday through Dec. 17.

Although the alert for the medical system in Tokyo is still placed at the second-highest level, the metropolitan government noted severe coronavirus cases were expected to continue increasing, while health care facilities will struggle to conduct everyday care.

The central Japan prefecture of Aichi logged 198 new infections, of which 92 were reported in Nagoya, the largest city in the central region with a population of about 2.3 million.

Nagoya's medical system remains strained, with some 140 of around 150 hospital beds allocated to COVID-19 patients occupied as of Wednesday.

Shigeru Omi, head of the central government's panel on virus countermeasures, has said Nagoya is among the cities experiencing a notable increase in virus infections and that movement of people should be restricted.