A small vessel carrying 62 people, mostly sixth-grade students on a school trip, sank Thursday in the sea off western Japan shortly after all aboard were rescued by Japan Coast Guard ships and nearby fishery boats, the coast guard said.

The 19-ton Shrimp of Art was carrying 52 children at the time of the accident, with two of the students and a 72-year-old tour guide taken to the hospital for hypothermia and hyperventilation upon being rescued, according to the Takamatsu Coast Guard Office in Kagawa Prefecture. 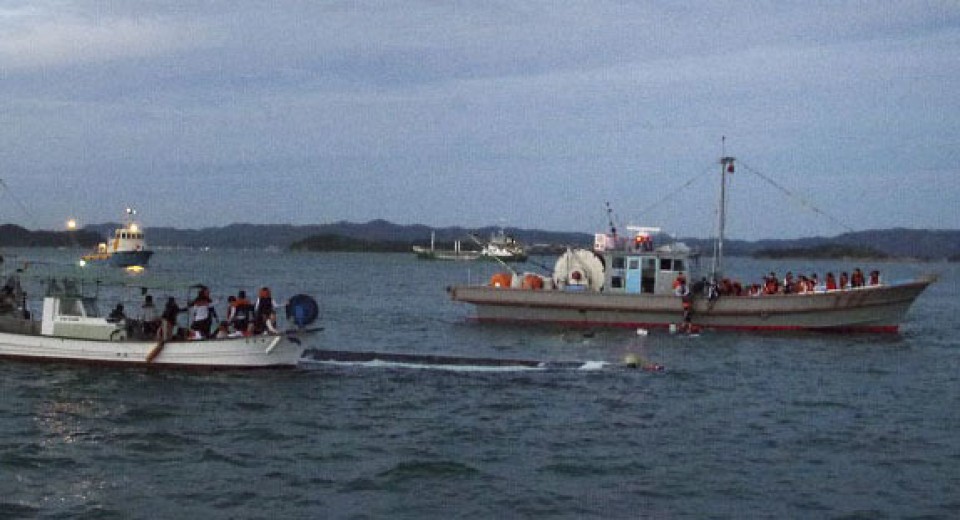 Children on a fishery boat after being rescued from a sinking ship (C) in the sea off Kagawa Prefecture, western Japan, on Nov. 19, 2020. (Photo courtesy of Takamatsu Coast Guard Office)(Kyodo)

The female tour guide required minor treatment after having ingested sea water, while the students, one boy and one girl, returned home after warming up.

The group of children from Kawatsu Elementary School in Sakaide in the prefecture was in the midst of a two-day school excursion that started Wednesday and included a cruise in the Seto Inland Sea.

According to the office, the captain of the ship, which operated as a "sea taxi," contacted the coast guard at around 4:40 p.m., saying the vessel was taking in water after bumping into a floating object in the sea off Yoshima Island.

A local fire department also received a report from the coast guard office, saying "A ship carrying elementary school children is about to sink and they are believed to be floating in the sea, wearing life jackets."

All 62 people on board, including five teachers, two tour guides and three crew members, were rescued by around 5:50 p.m. before the vessel foundered.

After the accident, Toyohiro Shirakawa, principal of the elementary school, and others told a press conference that the vessel began to sink 10 minutes after striking the object.

Children were initially asked to stay on the ship's deck or rooftop, but later waited inside the inundated vessel, the teachers said.

According to the city education board, the 45-year-old captain told children to wear life jackets and jump into the sea. When coast guard ships arrived in the area, many of the children were already in the sea, while over 10 people remained on the vessel's rooftop.

Shirakawa said that although some had panicked, the children in the group were encouraging each other.

The local coast guard office plans to question the captain and other crew members to determine the cause of the accident.