Three groups aiming to improve the rights of sexual minorities, including one created with the help of athletes, launched a petition Thursday calling for the enactment of an anti-discriminatory "LGBT Equality Law" in Japan ahead of next year's Tokyo Games.

The advocacy groups said at a press conference in Tokyo that while more than 80 countries around the world have similar laws in place, Japan currently has no legal protections against discrimination on the basis of sexual orientation or gender identity. 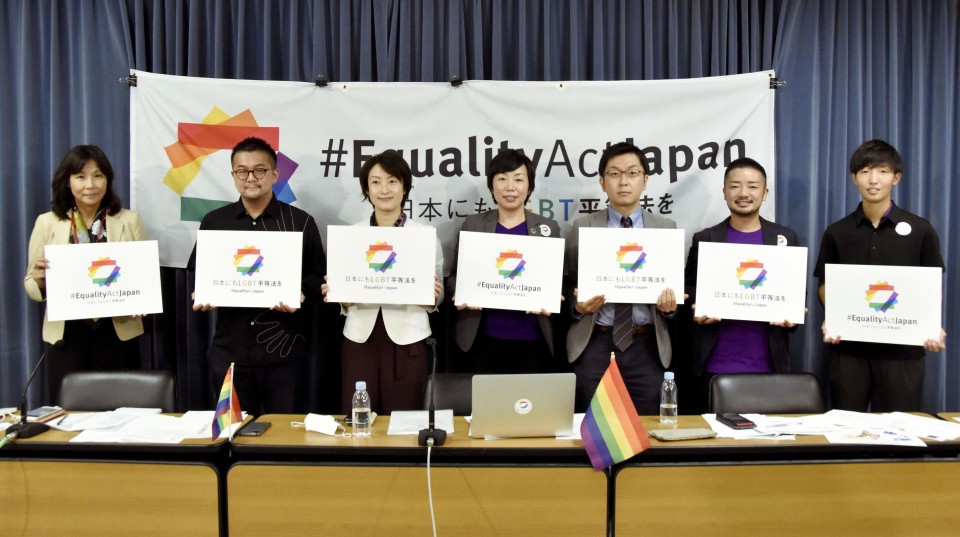 Members of advocacy groups and supporters for a petition to enact LGBT rights law hold up cards in Tokyo on Oct. 15, 2020. (Kyodo)

The groups said they believe such a law should exist in Japan "as a legacy of the Tokyo Olympics and Paralympics, which advocates diversity."

They began collecting signatures online Thursday and plan to submit them to each political party in Japan, with the goal of having the law enacted by the time the postponed Olympics begin in July next year.

Yuri Igarashi, a representative of the Japan Alliance for LGBT Legislation, pointed out that "the prohibition of discrimination based on sex or sexual orientation" is clearly stated in the Olympic Charter and that "legislation is the responsibility of the host country."

"There are many cases of students being bullied at school or people not getting hired by companies (due to discrimination). If there is a law prohibiting discrimination, then steps can be taken against that," Igarashi said.

Shiho Shimoyamada, a soccer player who announced she has a same-sex partner, said she hopes enactment of an anti-discrimination law would help Japan's LGBT athletes to feel more accepted by their peers.

"Some athletes have retired because their coaches and teammates don't understand them," Shimoyamada said. "I wish we could have an environment where we can enjoy sports with peace of mind."