While many people have learned to stay in touch with loved ones, friends, and colleagues through videoconferencing during the COVID-19 pandemic, the reduction of face-to-face interaction has boosted a market for robots providing substitutes for physical human contact.

"Healing robots," such as the cuddly humanoid Lovot developed by Groove X Inc., Sony Corp.'s Aibo robotic dog, and Qoobo, a furry cushion with a tail that moves in reaction to strokes developed by Yukai Engineering Inc., are seeing sharp sales rises, the companies say.

Lovot and Aibo can gather data on the well-being of their owners and report it remotely, which is why some people are gifting the automatons to their elderly parents living far away whom they are refraining from visiting due to infection risks.

"When people feel uneasy or lonely, they tend to yearn for a sense of physical touch," Hiroshi Ishiguro, a professor of intelligent robotics at Osaka University, said in explaining the reason behind the trend.

"Through healing robots, they must be trying to confirm the actual existence of others, which is hard to really feel on the telephone or through videoconferencing," he said.

Lovot, a mascot-like robot with round eyes that stands 43 centimeters tall, has even found its way into a kindergarten in Nagoya, central Japan, to help young children who may be affected by the emotional stresses created by the pandemic. 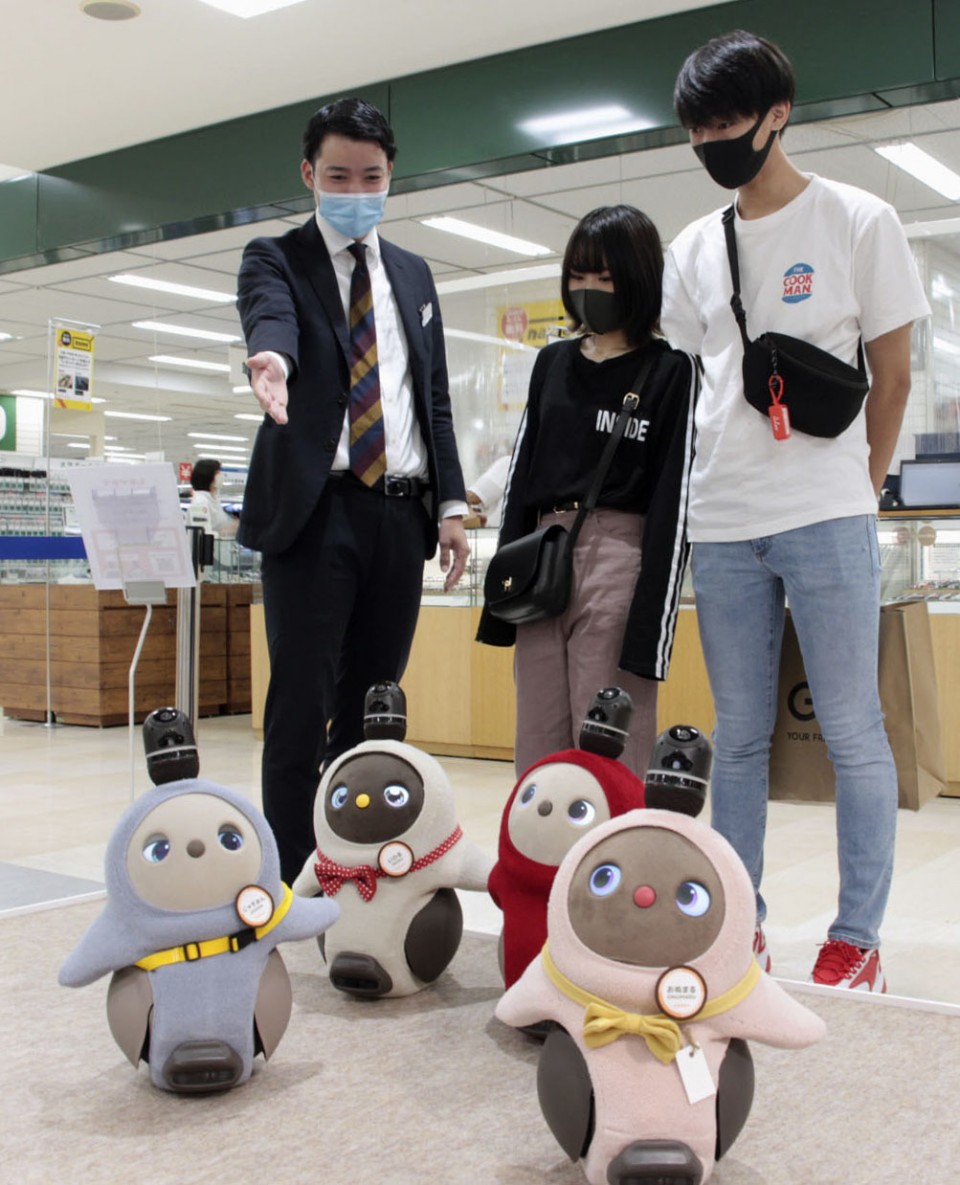 People look at Japanese tech venture Groove X Inc.'s LOVOT home robots, designed to "enhance levels of comfort and feelings of love," on sale at the Takashimaya department store adjacent to JR Nagoya Station in Aichi Prefecture, central Japan, on Oct. 2, 2020. The robot is equipped with a 360-degree camera that can accurately scan a room. (Kyodo) ==Kyodo

Featuring more than 50 sensors, the robot can recognize, approach and make eye contact with its owner, according to the company website. The sensors also allow it to feel where its body is touched and avoid obstacles.

Weighing about 4.2 kilograms, it is light enough to easily pick up, with arms adjustable to the "hug mode" and a temperature similar to the human body at around 37 C.

The robot returns autonomously to its charging station to "sleep" at a set time, and can look jealous -- the first-ever for a robot -- when it is part of a duo setting and the other Lovot is getting more attention, the website says.

At Moriyama Kindergarten, which has introduced two Lovots, Principal Kyoshin Kodama said interacting with the Lovots helped to calm the kids' moods, dispelling his worries that the pandemic might have a long-lasting impact on the children.

A major department store in Nagoya said that despite a hefty price tag of 329,780 yen ($3,110) plus regular maintenance fees, sales rose 15-fold in September from the figure in March, which was logged before Japan declared a state of emergency due to the virus.

With a camera that has a 360-degree view, the robot can determine abnormalities in the home and remotely report them when the owner is absent. It can also share with family members living apart data such as how many times it has been touched as an indication of how its owner is doing, the developer says.

Aibo, a robot dog, has similar functions, making it also a popular draw for people in their 30s and 40s to buy for their parents as a way to confirm their safety from a distance, a Sony official said.

More than 20 years since the first model hit the market, the sixth-generation Aibo has been enhanced to recognize up to 10 people from registered facial images, according to its website.

It also allows owners to customize features such as the color of its eyes and whether it is a male or female, and sales are growing in line with the increasing hours that people are staying home, the official said.

Qoobo sold 608 units in September, about 2.6 times the figure from a year earlier, the company said.

Yukai Engineering said its "therapeutic robot" was originally designed for people who cannot own pets due to allergies or other reasons, but has found a broader customer base. It says it plans to release a new product in December.

Ishiguro, the Osaka University professor, predicted that demand for healing robots "will only grow further as the pandemic drags on."