More than 600 million trips may be made in China for the eight-day holiday that started Thursday, the country's biggest online travel agency said, underscoring that the new coronavirus has been brought under control at home.

Independent tours, car rentals and high-end hotels are "popular bookings" during the holiday to celebrate the anniversary of the founding of the communist People's Republic of China and the Mid-Autumn Festival, according to Trip.com Group Ltd. 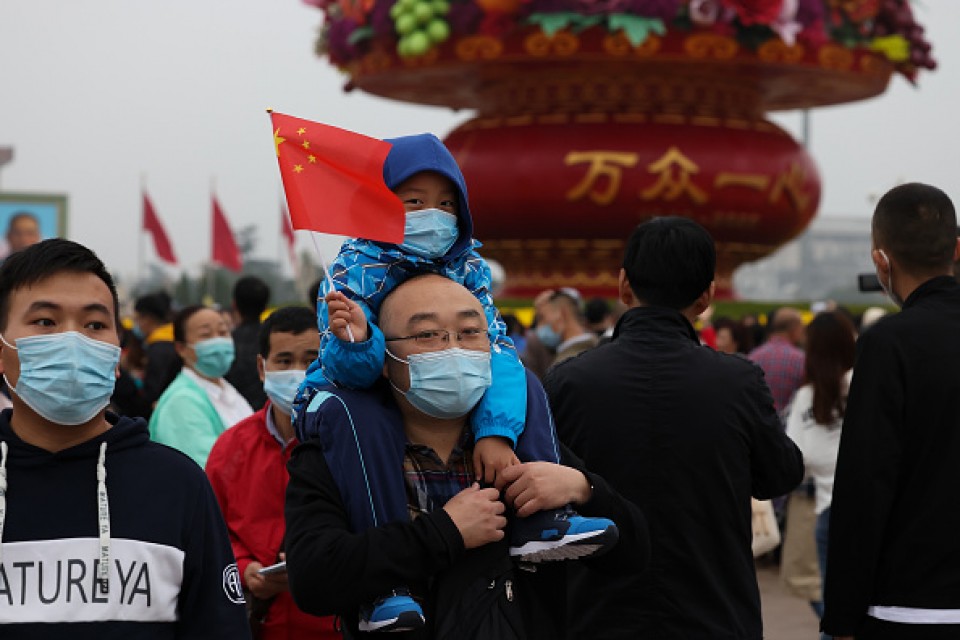 A Chinese family gather for a photo following the flag raising ceremony at Tiananmen Square to mark the 71st Anniversary of the Founding of the People's Republic of China on October 1, 2020 in Beijing, China. China celebrates National Day and Mid-Autumn Festival on October 1st with a 8-day holiday this year. (Getty/Kyodo)

As traveling abroad has been restricted against a backdrop of the pandemic, Sanya in China's coastal island province of Hainan and Lijiang in Yunnan Province, known for its mountainous landscape, are among the most popular tourist destinations, the agency said.

"Tourists are willing to spend a little more money to buy good experiences and services" on the back of an economic recovery, it added.

Many tourist spots still place a cap on the number of visitors allowed and offer pre-booking amid lingering concern about another wave of the virus, which was first detected late last year in the central Chinese city of Wuhan.

In Beijing, however, famous tourist sites, such as the Palace Museum, have been filled with Chinese citizens. Tickets for entry to the museum, known as the Forbidden City, during the holiday through next Thursday are sold out.

Despite sluggishness in exports, a major driver of growth, China's broader economy logged its first expansion in two quarters in the April-June period due in part to a rebound in production and consumer spending, climbing 3.2 percent from the previous year.

The virus that causes respiratory disease COVID-19 has sickened over 85,000 people in mainland China and killed more than 4,600. The increase in new infections is believed to have peaked in late February in the nation.

On Oct. 1, 1949, communist leader Mao Zedong declared the founding of the People's Republic of China after defeating Chiang Kai-shek's Nationalist army and finally ridding the country of foreign forces.