The ministers also confirmed close cooperation in monitoring activities at sea to prevent North Korean vessels from engaging in illicit ship-to-ship cargo transfers, seen as a method of evading U.N. sanctions on the country over its missile and nuclear programs, the ministry said. 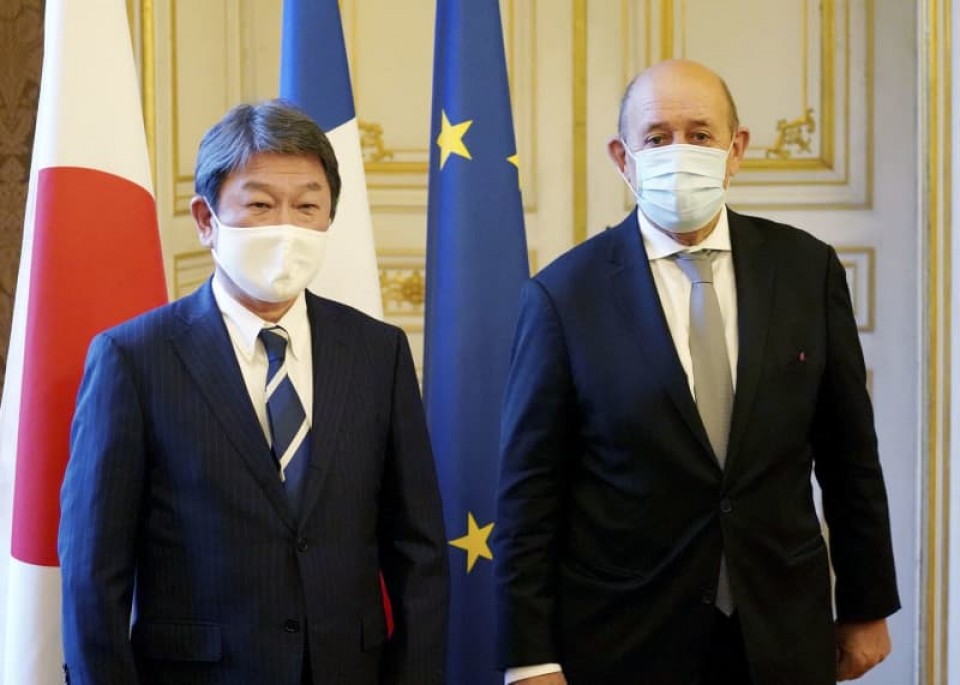 Tokyo has been looking to coordinate with European partners in steps against China's rising assertiveness in the South and East China seas. The ministers agreed that their countries' positions over matters in the region are the same, according to the ministry.

Japan and France, which has overseas territories in the Indian and Pacific oceans, have stepped up their security ties, conducting joint military exercises at sea and holding bilateral foreign and defense ministers' talks on a regular basis.

While in France, the second stop on a four-nation tour that also includes Portugal, Saudi Arabia and Kuwait, Motegi also confirmed cooperation with German Foreign Minister Heiko Maas in a teleconference on coronavirus responses and the realization of a rules-based order in the Indo-Pacific, the ministry said.

Motegi initially planned to meet Maas in person in Germany during his European trip but the German minister had to enter self-isolation after coming in close contact with a person who tested positive for the coronavirus, a Japanese government source said.

In the talks with the European ministers, Motegi also requested their support in settling the issue of North Korea's past abductions of Japanese nationals, the ministry said.

As Raychelle Awuor Omamo, Kenya's Cabinet secretary for foreign affairs, was also in France, Motegi took the occasion to convey in person Japan's intention to cooperate toward strengthening the African country's health care system and response to infectious diseases, the ministry said.

The talks came after South Korea requested UNESCO to have the "Sites of Japan's Meiji Industrial Revolution: Iron and Steel, Shipbuilding and Coal Mining" removed as a World Heritage site, saying it fails to recognize the suffering of Koreans who were forced to work at some of the facilities during World War II. Japan has criticized the move as unacceptable.

The dispute is one of several that Japan has been involved in with Asian neighbors at the body over issues related to wartime history.

He will hold talks with Saudi Arabian Foreign Minister Prince Faisal bin Farhan Al-Saud on Saturday in Riyadh and travel to Kuwait to offer condolences over the death of Emir Sabah Al-Ahmad Al-Jaber Al-Sabah, who died Tuesday at age 91, according to the ministry.