A red-crowned crane seems to be inspecting its recently-attached aluminum leg, repeatedly using its beak to tap away at the prosthesis while standing apparently bother-free inside a cage at the Kushiro City Zoo in Hokkaido in mid-September.

"The prosthetic leg from before didn't match and I just got finished changing it. I hope this one suits it better," explained Hiroko Iima, 40, a veterinarian at the zoo. 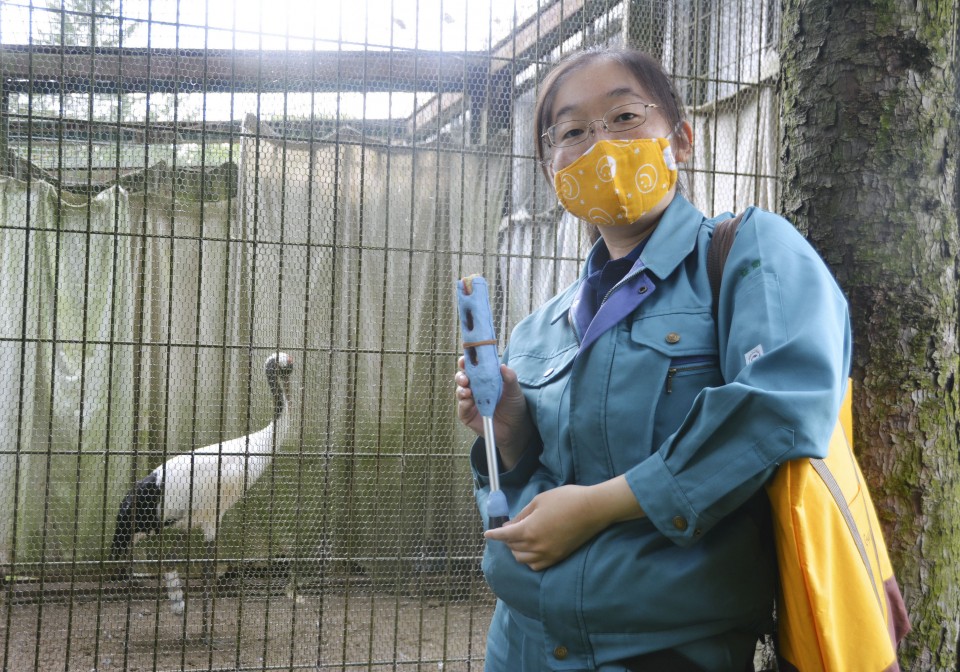 Veterinarian Hiroko Iima is pictured with a prosthetic leg for a red-crowned crane at Kushiro City Zoo in Hokkaido. (Kyodo)

The majestic birds, named for a bare patch of red skin on top of their head, are among the largest and most rare crane species on earth.

Also known as Japanese cranes, with a small resident population living in the eastern marshes of the nation's northernmost prefecture, the birds are both endangered and beloved. Their iconic status is best demonstrated by the use of a head and wings in the national airline's corporate logo, Japan Airlines Co., making the most of their association with longevity and good luck.

With efforts to save the species ramping up, the birds have seen their population recover somewhat in recent years after they were all but wiped out in the late 1800s and early 1900s by hunters and the shrinking of marshlands due to development.

Sought after for their meat, the cranes, called "tancho" in Japanese, were once prevalent in many parts of the country, and even protected by the Tokugawa shoguns, but the lifting of a hunting ban after the Meiji Restoration of 1868 saw numbers plummet until they had almost disappeared. They were once believed extinct but were rediscovered in the 1920s in the Kushiro Wetland.

Full-fledged conservation efforts began in the 1940s. The number of cranes has been steadily rising in Japan thanks to new sanctuaries and volunteer feeding operations.

Now, with numbers among the Hokkaido population rising to some 1,800 individuals, another problem has emerged, with the birds increasingly coming into contact with humans and coming off worse for it, with birds being killed or injured in accidents.

In the previous fiscal year, the Environment Ministry took in or protected a record 53 red-crowned cranes.

But even when they receive medical treatment, such as the prosthetic legs attached by Iima, the cranes cannot be returned to the wild. Rather, they are kept safely in exhibits so the public can better understand the importance of coexisting with and protecting the animals.

Iima purchases pipes and other materials for the prostheses at a home improvement center and crafts them by hand. When their legs are damaged, the omnivorous birds cannot stand and are unable to feed independently on the fish, small amphibians, rodents and plants that make up their diet.

There are five cranes with prostheses at the zoo that were injured when they became entangled in nets strung up to keep deer off farmland, among other accidents. Three of those have been put on public display since the autumn of 2018.

Since the zoo opened in 1975, it has taken in injured cranes. Initially, only around 10 birds were accepted per year, but the number has increased to 20 to 30 birds since the early 2000s. The veterinary treatment area at the zoo can host as many as six birds at a time, and it is always full.

The red-crowned crane has an average lifespan of about 30 years. Most that have been rescued, live out their life at the zoo.

For many years, the cranes that had been injured were kept out of view from the general public. But Iima pushed to increase their visibility in hopes of increasing awareness about the impact human activity can have on the animals. In doing so, she managed to convince her boss to open an exhibit dedicated to the injured animals.

According to a summary compiled by the Red-Crowned Crane Conservancy, a nonprofit based in the city of Kushiro utilizing surveys conducted by the prefecture, the number of confirmed cranes in Hokkaido, mainly in the eastern part, increased from 33 in fiscal 1952 to 1,800 from January to early February this year.

The government and local authorities for many years have tried to promote breeding of the cranes by feeding them in the winter. But the ministry has been gradually phasing the practice out since fiscal 2015 in an effort to encourage the population to disperse to other regions.

The International Union for Conservation of Nature and Natural Resources, which creates the Red List of threatened species, is considering moving the red-crowned cranes down one level from EN, or endangered -- the second of the three levels of animals facing extinction -- to VU, or vulnerable.

But Kunikazu Momose, 69, chief director of the nonprofit conservation organization in Kushiro, said, "Most of the cranes are dependent on people. It would be hard to suggest that they are wild. If we stopped feeding them, their numbers would fall dramatically."

Accidents are also increasing. Whereas there were 16 in fiscal 2000, the number nearly tripled to 45 cases last fiscal year. Collisions with powerlines, impacts with cars and cranes falling into tanks used to store livestock waste were some of the reasons for the spike.

"Unlike other birds, it is possible to reduce traffic accidents just by letting drivers know the nature of the Japanese crane, which does not try to escape immediately from moving cars," Iima said. "People need to understand more about the ecology of living things around them and think more about how to coexist."