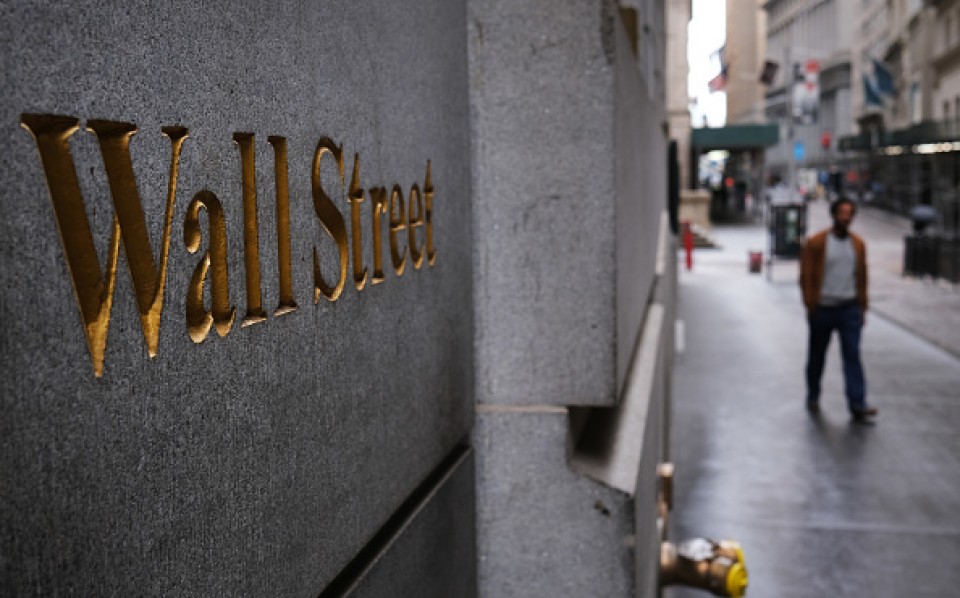 A person walks on Wall Street as the coronavirus keeps financial markets and businesses mostly closed on May 08, 2020 in New York City. (Getty/Kyodo)

WASHINGTON - The U.S. economy expanded at an annualized rate of 33.1 percent in the July-September period, marking the largest quarterly gain on record but still only representing a partial recovery from the devastating fallout of the coronavirus pandemic, government data showed Thursday.

Just days ahead of the U.S. presidential election, President Donald Trump, who trails his Democratic rival Joe Biden in polls, immediately played up the better-than-expected data on real gross domestic product as a sign that the country is on the right track.

"Biggest and Best in the History of our Country, and not even close. Next year will be FANTASTIC!!!" the 74-year-old Republican incumbent tweeted, adding that Biden's proposed tax hike plan would "kill it all."

In contrast, Biden, the 77-year-old former vice president, argued that the lack of a full recovery demonstrates Trump's failure to control the intensifying pandemic in the spring, saying the incumbent's inaction "led to gutted businesses, closed schools and tens of millions of people out of work that could have been prevented."

A widespread shuttering of businesses and stay-at-home orders sent the GDP to a 31.4 percent decline in the April-June period, the worst quarterly deterioration since comparable data became available in 1947, according to the Commerce Department.

"We are in a deep hole and President Trump's failure to act has meant that third quarter growth wasn't nearly enough to get us out of (it)," Biden said in a statement, noting that the recovery is "slowing if not stalling."

The department attributed the robust growth in the most recent quarter to "continued efforts to reopen businesses and resume activities that were postponed or restricted" due to the COVID-19 pandemic.

Private consumption, which accounts for two-thirds of the world's largest economy, surged 40.7 percent in the third quarter after falling 33.2 percent in the April-June period.

Nonresidential private investment, a measure of business spending, was up 20.3 percent, following a decline of 27.2 percent.

Exports increased 59.7 percent after falling 64.4 percent in the preceding quarter, while imports jumped 91.1 percent compared with a drop of 54.1 percent.

GDP measures the total output of goods and services within a country's borders.

While a moderate recovery is expected to continue in the October-December period, some economists say the output loss has been so huge that it may take until late 2021 to reach its pre-pandemic level.

Compared to a year earlier, the third-quarter GDP was down 2.9 percent, according to the Commerce Department data. Employment is also still at more than 10 million jobs below the pre-pandemic level.

Meanwhile, uncertainties remain over how the pandemic will unfold, with daily coronavirus cases in the United States, once seen to be decreasing from the peak in summer, again surging and reaching the highest level since March.

White House economic adviser Larry Kudlow told Fox News that the Trump administration does not feel that further shutdowns would be helpful or necessary.

Biden, who has been criticizing Trump for downplaying the threat of the virus and refusing to listen to science, at one point said he would shut down the economy if scientists recommended it. But he has said more recently that he will "shut down the virus, not the economy."