The Imperial Household Agency is considering excavating Daisen Kofun in western Japan, the country's largest keyhole-shaped tomb mound, in a conservation project that could begin around next fall, sources close to the plan said Saturday.

The tomb mound in Osaka Prefecture, dating back to around the middle of the 5th century, is under control of the agency as the mausoleum of Emperor Nintoku, while academic debate continues over who was actually buried there. 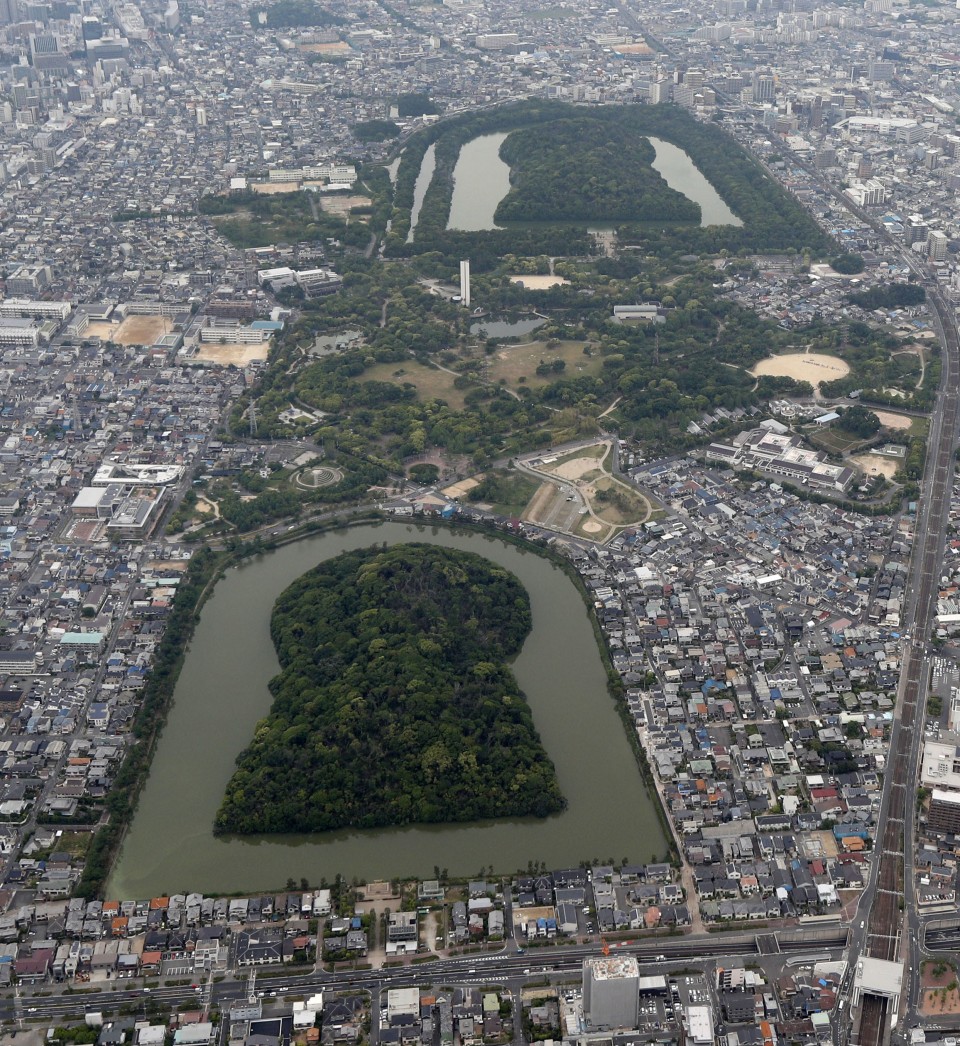 Photo taken May 14, 2019, from a Kyodo News helicopter shows the Emperor Nintoku mausoleum (back), Japan's largest ancient mound, officially called Daisen Kofun, one of the sites collectively called the Mozu-Furuichi tumulus clusters in Osaka Prefecture. Japan's Cultural Affairs Agency said the same day that the tumulus clusters, including Emperor Richu's mausoleum (front), have been recommended for addition to the World Cultural Heritage list by an advisory panel of the U.N. Educational, Scientific and Cultural Organization. (Kyodo)

If the planned re-excavation project is carried out, it would be the first digging since an ancient burial complex comprising 49 tombs including Daisen Kofun was added to the World Heritage list in 2019, the sources said.

Archaeologists and historians hope the envisioned research on the tomb mound will shed light on its structure, many aspects of which remain mysterious.

Daisen Kofun, officially 486 meters in length, is believed to have been larger when originally built, with a recent 3D study estimating the mound was at least 525 meters long.

The tomb mound in the city of Sakai is surrounded by three moats. Excavation work in 2018 revealed a floor of rock and clay figures.

According to the sources, the agency plans to expand the area of research in cooperation with the city, aiming to figure out the extent of the rock-paving and check for the presence of additional clay figures.

The agency prohibits the general public from visiting the site deemed to be a tomb of an ancestor of the Japanese imperial family. The joint research with Sakai City in 2018 was its first collaboration with a municipality.