Japan could face a resurgence of coronavirus infections, although the number of cases has been on a downward trend since late July, a group of experts on virus prevention said Thursday.

The pace of decline in the number of new infections has been slowing recently, with some regions even marking a rebound, the advisory group for the health ministry said. 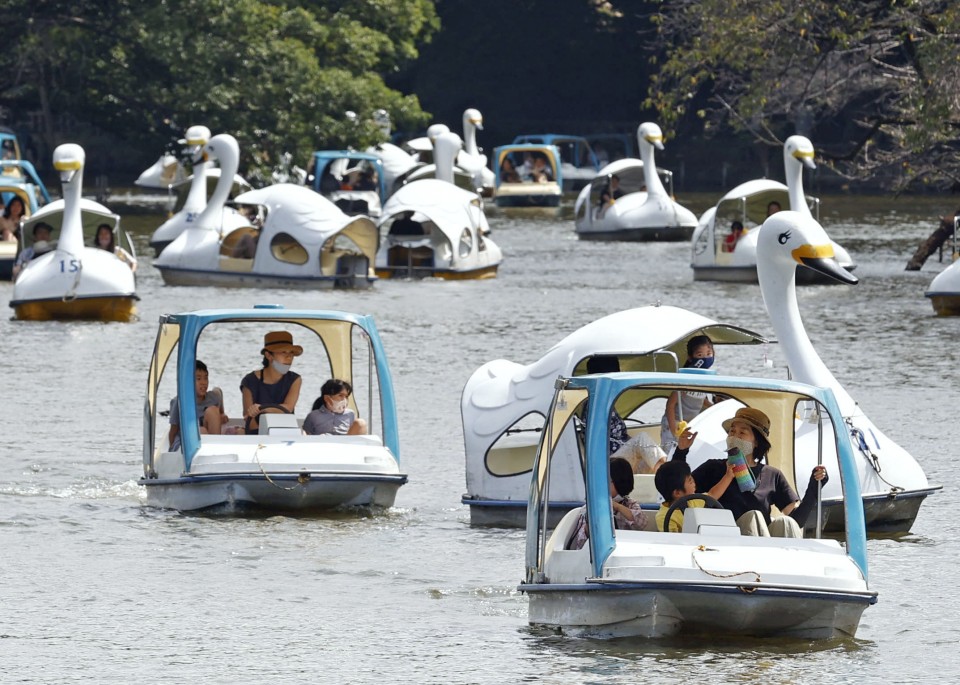 People row swan boats at a pond in Inokashira Park in Tokyo on Sept. 22, 2020. Open air recreation spots in urban areas were crowded with visitors amid continuing worries over the novel coronavirus on the final day of Japan's four-day weekend. (Kyodo)

Across the country, new infections totaled 3,287 in the seven days through Sept. 22, down from 3,731 in the previous week.

But they also said that the effective reproduction number, which measures the average number of people one person can infect, has risen to almost one.

By prefecture, new cases in Miyagi, Gunma and Chiba began increasing again from the beginning of September, with Kyoto and Osaka also showing signs of a resurgence, according to the experts. In Tokyo, the declining trend has bottomed out.

Although the number of patients with severe symptoms has been on a downturn nationwide since late August, the rate of decline has been relatively low.

Outbreaks at dining establishments and workplaces have been reported since economic activity resumed, likely due to people taking off their face masks while speaking. There have also been reports of cluster infections at construction sites, food processing factories and barbeque parks.

Health experts are also watching to see if more frequent outings or even traveling over Japan's four-day holiday period through Tuesday may have caused a resurgence of the virus.

"We need to keep an eye on when the impact of the movement of people (during the holidays) will come out," said Takaji Wakita, director general of the National Institute of Infectious Diseases who heads the group.