A Japanese art student is taking aim at body shaming in YouTube advertisements with an online petition campaign to root out images that promote discrimination based on appearance.

Aoi Murata, 20, a third-year student at Akita University of Art, had amassed over 46,000 signatures by early September in support of a campaign she began in April to stop companies from streaming ads that debase people based on "appearances such as body hair or body types." 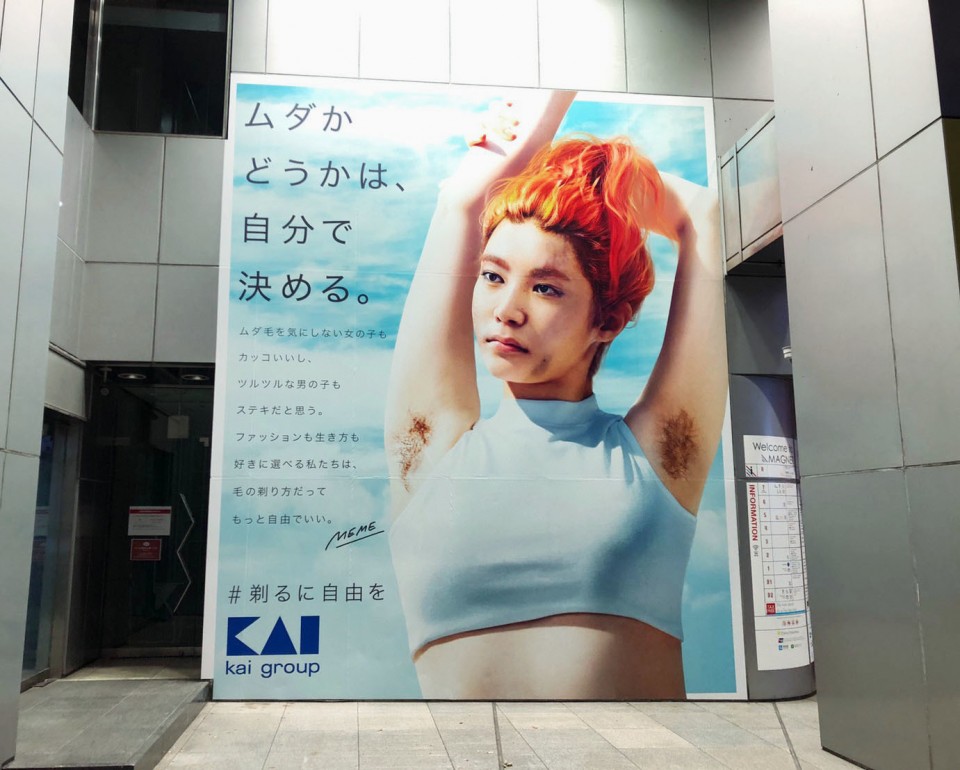 She plans to send out the signatures to companies that stream such ads and YouTube after reaching a target of 50,000.

Experts say such internet ads for diet supplements, hair removal and other products have the potential to appeal to feelings of inferiority to promote a false sense of beauty -- with the implication that being fat is out or hairy unclean.

With protests and complaints about such ads on the rise, some companies are tightening regulatory measures, while experts argue a mechanism needs to be in place to scrutinize harmful internet content and eliminate it when necessary.

Indeed, Japan's beauty industry is often criticized for promoting unrealistic standards, for example skin-whitening products and double eyelid procedures, all in the name of achieving "beauty." 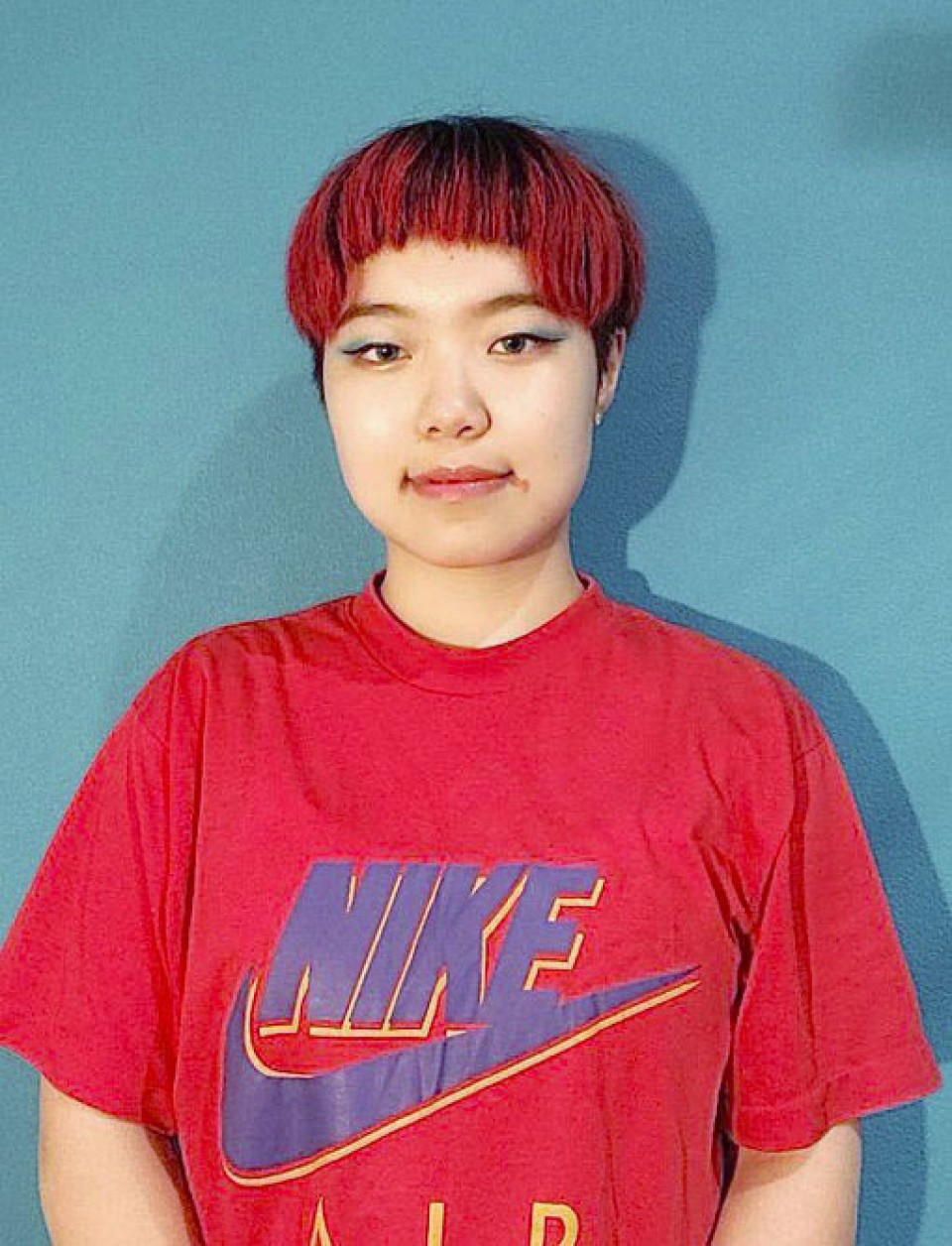 "Body characteristics are brought up (in advertisements) as if they are bad, and there are many people who fret over this and feel hurt whenever they look at them," explains Murata, who hails from Hakodate, Hokkaido in northern Japan.

Murata, who says she was teased by classmates in elementary and junior high school because of a plump body type, knows how hurtful such experiences can be. As she grew older, she began to question advertising methods that incite people to purchase products by insulting their looks while promoting beauty stereotypes.

"Children nowadays have lots of opportunities to come in contact with the internet, and they end up having a warped sense of value instilled in them. We need to bring a stop to this for the sake of the next generation as well," says Murata.

Murata says she is not against people dieting, using hair removal products or even having plastic surgery if that makes them happy. Her complaint is with advertisers who she says belittle people to sell their products.

Many of the ads take the form of manga. A screenshot of one shows a girl in tears after being rejected by her former tutor because even though he found her attractive as a high school student, he doesn't anymore since she is no longer desirable. "I don't date fatties" he says.

According to the Japan Advertising Review Organization, a self-regulatory body that handles such complaints and inquiries from consumers, competitors, and other sectors, there were 631 complaints from January to July -- about a seven-fold increase from the same period last year.

JARO speculates that one reason for the uptick has been the influence of the novel coronavirus, which has led to people spending more time surfing the internet as they remain at home.

But as criticism mounts over body-shaming ads, some companies have started countermeasures. The Japan arm of Google LLC, which operates YouTube, says it has removed thousands of ads that violate its policy.

At the end of August, Yahoo! Japan asked advertisers to stop using parts of ads that overtly exploit peoples' complexes about their appearances.

Toko Tanaka, a professor at Otsuma Women's University who specializes in media culture, says that unlike television and newspaper advertisements, which are screened for such content, online video ads tend to be mass-produced with no inspections.

"We need to build a system where advertisers and those in the industry check contents in light of social commonsense and the values of the times," says Tanaka.

On the other hand, some advertisers are deliberately pushing "appearance diversity" against the status quo to break stereotypical molds of beauty. 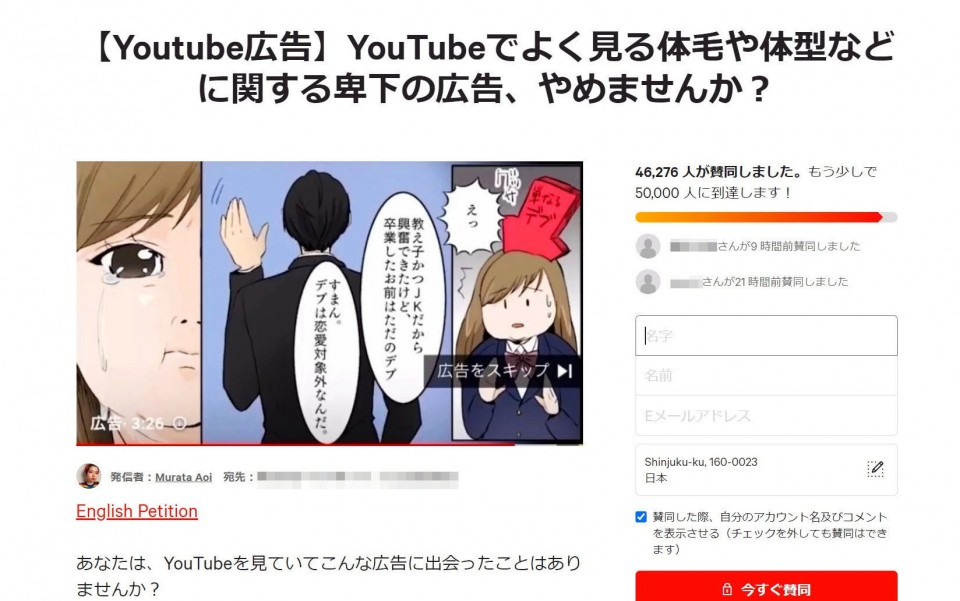 Photo shows the website of an online petition campaign launched by Aoi Murata. (Names of participants have been pixelated for privacy reasons)(Kyodo)

For example, Kai Corp., a large manufacturer of razor blades and industrial cutting tools, caused a sensation with its display of a Japanese virtual model proudly raising both arms showing her armpit hair on a billboard in Shibuya, Tokyo's fashion mecca, in August.

In Japan, hair removal ads frequently refer to unwanted hair as "muda-ge," or pointless hair. But Kai's message, written in bold lettering at the ad's top, is: "You decide whether it is pointless or not." The ad concludes with the hashtag #freedom in shaving.

According to the razor company, the decision to produce such a counterintuitive ad came from what it learned on social media from the voices of some young women who say they are concerned about body hair but unable to shave because of delicate skin.

"As a company that has been dealing with body hair for more than 100 years, we want to continue to send out the message that we will help people free themselves of these stereotypes of body hair," said a company spokesperson.