Japan and Britain broadly agreed Friday on a free trade deal, setting the stage for companies to remain under existing bilateral tariff arrangements after the transition period for the United Kingdom's exit from the European Union concludes at year-end.

"In most areas, we have reached substantial agreement," Japanese Foreign Minister Toshimitsu Motegi told reporters online after two days of late-stage negotiations in London, adding the two countries will work on the remaining details for a fuller agreement by the end of this month.

Motegi and British International Trade Secretary Liz Truss had what she called "positive negotiations" on the envisioned free trade deal, which largely replicates the terms of a Japan-EU agreement that took effect in February 2019. 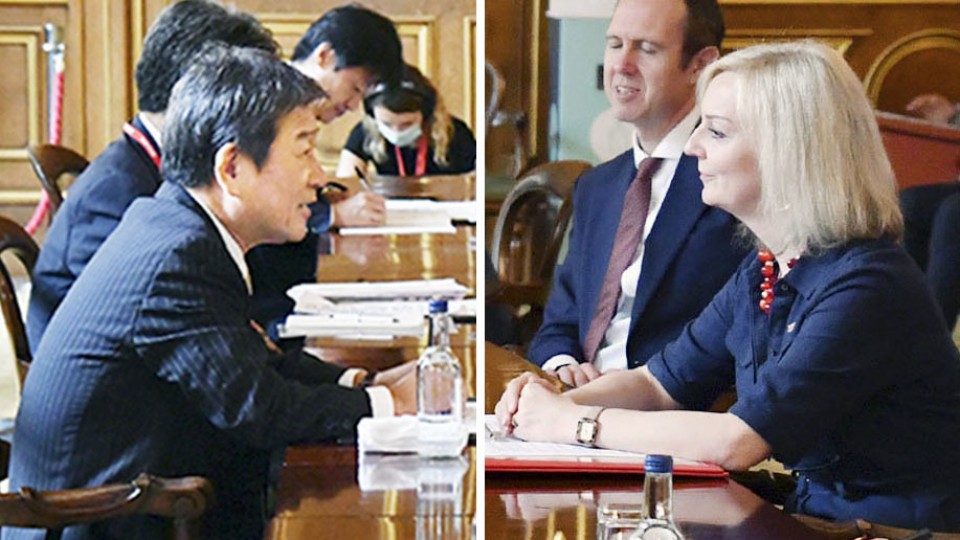 "The Japan-Britain economic partnership agreement will contribute to further expansion of bilateral trade and investment," Motegi said. "We agreed to accelerate remaining work to put the deal into effect on Jan. 1 next year from the perspective to secure smooth continuity in business of both countries."

Motegi declined to comment on the remaining areas yet to be worked out but said progress was made in areas such as market access. Some of the sticking points before the ministerial talks included when to reduce tariffs on imports of automobiles.

Japan and Britain rushed through the broad agreement in about two months of negotiations as they both need to complete ratification procedures at home and put the deal into effect in January when the United Kingdom will no longer be included in the bloc's trade arrangements.

No deal by year-end would have caused adverse effects on both countries' business operations, such as the imposition of higher tariffs.

Motegi became the first member of Prime Minister Shinzo Abe's Cabinet to travel overseas since the outbreak of the novel coronavirus was declared a pandemic in March by the World Health Organization.

His visit, carried out under strict precautionary measures, including the use of a chartered plane, signals a gradual resumption of high-level diplomatic activities by Japan before a Group of Seven summit that will possibly be held in late August or early September in the United States.

The deal is likely to provide the impetus for Britain to join the trans-Pacific free trade agreement grouping 11 countries, including Japan, Australia and Mexico, accounting for about 13 percent of the global economy.

Ministerial-level delegates from the 11 trans-Pacific partnership members on Thursday released a statement saying they "warmly welcome" the interest that was shown by several economies, including Britain, to accede to the multilateral framework.

Britain is a major trade partner for Japan, with trade between them worth about $38 billion in 2019. Japan was Britain's 11th largest export market, and Britain was the 12th biggest market for Japan.

Britain is home to the offices of nearly 1,000 Japanese companies, which have created 180,000 jobs, according to the Japanese Foreign Ministry.