Despite a rise in the number of foreign residents in Japan who practice Islam, cemeteries offering burials in accordance with the Quran remain sparse, with Muslims struggling to gain understanding of the need for new sites from locals in a country where cremation is the norm.

While Japan is home to an estimated 200,000 Muslims, a figure likely to grow as the country accepts more foreign workers, there are currently only seven locations for Islamic interment. 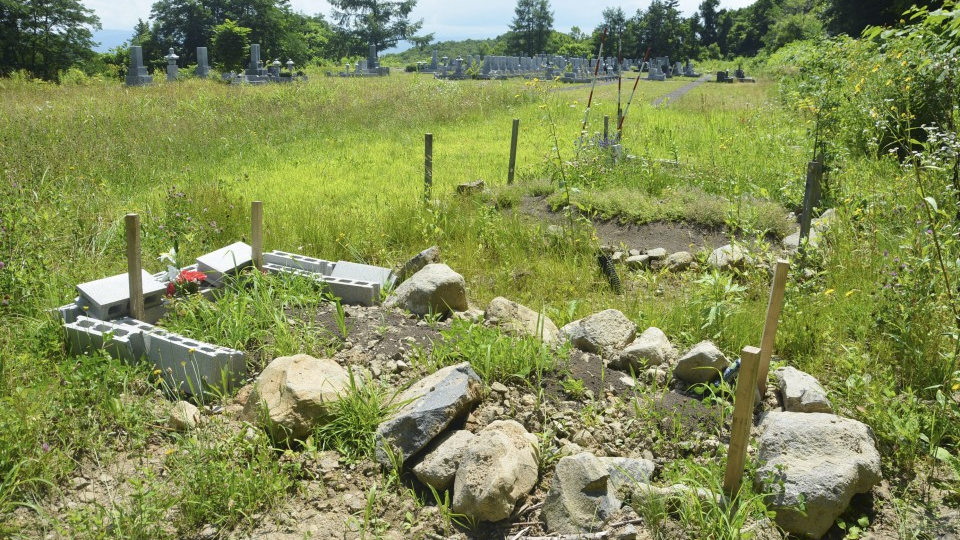 A burial ground (foreground) available for Muslims at Yoichi Reien, a cemetery in Yoichi, Hokkaido, is pictured on July 15, 2020. (Kyodo)

"It would take money, time, and effort to get buried in my native country, and it isn't realistic," said a 57-year-old man from Pakistan who resides in Sapporo.

The man, who came to Japan 32 years ago, is married to a Japanese woman with whom he has two children and has no plans of leaving the country.

As there is a belief in the resurrection of the dead, Islam dictates that believers be buried because the soul needs to return to the physical body, according to the Japan Muslim Association.

According to the Ministry of Health, Labor and Welfare, the central government has not set regulations for burials and leaves municipalities to establish their own rules on issues such as the distance of sites from residential areas and rivers. As of fiscal 2018, over 99 percent of bodies in Japan were cremated.

According to the Japan Islamic Trust, Japan has no burial sites for Muslims at all in the northeastern Tohoku region or west of the Chugoku region.

"The body often must be moved to distant cemeteries, which can damage the corpse or result in high transportation fees," said the trust's director general, Qureshi Haroon.

One of the seven sites is a regular cemetery in Hokkaido in the coastal town of Yoichi. But Yoichi Reien offers only very limited space for burials -- just four to five free spaces -- leaving Towfik Alam, chairman of the Hokkaido Islamic Society, "incredibly worried."

Although the society had planned to create a cemetery in Otaru that would follow Hokkaido's protocols such as being at least 110 meters away from a residential area, the project was abandoned last summer after it failed to gain support from residents.

"Residents were worried about the hygiene of burials, among other aspects," a city spokesperson said.

Meanwhile, there are plans to build a cemetery for Muslims in Oita Prefecture, but it too has been facing pushback from locals who are worried about water pollution.

Hirofumi Tanada, an honorary professor at Waseda University with extensive knowledge of Japan's Muslim community, says accommodating the needs of practitioners of not just Islam but a range of religious traditions has become more important since Japan amended its immigration law last April to accept more foreign workers.

"The problem regarding burials is just one example," he said.