The now-postponed 2020 Tokyo Olympics, which have been shrouded by uncertainty due to the coronavirus pandemic, should be held next year by whatever means because the games themselves sprang from the very idea of overcoming wars and epidemics in ancient times.

Today's cutting-edge technology will allow organizers to hold an unprecedented event that can set an example for the "epidemic-proof" Olympics of tomorrow.

The first record of the Olympics can be traced back to 776 B.C., around the time Greece was gripped by internal strife and infectious diseases, while many historians believe the games started well before then.

This means after 2,800 years, humanity has not yet overcome those fundamental challenges.

Legend says Iphitos, king of the ancient city-state of Elis, asked the oracle of Delphi what should be done to save Greece from wars and epidemics.

He was told to create a peaceful sporting competition that would become the Olympic Games, or advised to revive an already existing version of the Olympics.

Iphitos is also known for having signed a truce with other monarchs to halt regional conflicts to allow the games to take place, beginning the tradition of the Olympic Truce.

Looking at the world today, which is still plagued by conflict, humankind appears to be standing at a critical juncture in history.

The ancient Olympics gave people in each city-state a sense of unity that they were all Greeks, and it is likely that this Olympics will bear a strong message that humanity is united in confronting the challenges that threaten its very existence.

Sport is simple and easy to understand, yet it has the strength to unite people.

Considering the origin of the Olympics, linking the holding of a games with reconstruction or recovery from war or disaster can be considered as it returning to its roots.

Japan's efforts to host the Olympics in Tokyo over the years were closely tied to the concept of recovery from catastrophic events.

The government has dubbed the 2020 Tokyo Games the "Reconstruction Olympics," referring to the country's recovery following the 2011 earthquake, tsunami, and nuclear disaster.

The 1940 Tokyo Games, never held due to the outbreak of the Second Sino-Japanese War and World War II, were intended to showcase the country's recovery from the 1923 Great Kanto Earthquake.

Similarly, the 1964 Summer Games were held to show how Japan had risen from the ashes of World War II.

The World Health Organization classed the spread of the COVID-19 respiratory disease-causing coronavirus as a pandemic on March 11 -- the same day the massive quake hit Japan about a decade ago.

Olympic Games have been canceled before due to outbreaks of war but never due to an epidemic.

Also, there is significance in holding the Summer Games next year, as 2021 is a milestone year in the Olympiad.

The Olympiad is a four-year period based on a dating system used by ancient Greeks, and the games were held in the first year of each Olympiad, with the first of it beginning in the summer of 776 B.C.

The ancient Olympics ended in the 293rd Olympiad, but they were resurrected in 1896 by Pierre de Coubertin, which makes 2020 the first year of the 32nd Olympiad in the history of the modern Olympics.

Advanced technology could realize an innovative Olympics with effective measures against the spread of the novel coronavirus.

For example, many timed sports such as running and swimming can be held remotely and separately outside Japan if certain conditions are made equal.

Then, those images of races could be integrated into a synthetic video as if they were racing together during the games in case athletes cannot come to Japan.

It would be difficult for other sports, such as combat and team sports, however.

It would be necessary to ask athletes participating in such sports to come earlier, take virus tests, and avoid contact with others in the athletes' village.

As for spectators, the number can be reduced through measures such as allowing only those who have taken virus tests, or in an extreme case, the games can be held in front of empty grandstands.

Using the technology of today, it seems to be possible to collect images of people at public viewing sites around the world. The pictures then can be combined and turn them into the background images of competitions during the games.

So far, the International Olympic Committee has been working to streamline the Tokyo Games, slated for July 23 to Aug. 8, hinting at the possibility of a reduced number of spectators.

With fewer or no spectators at all, the most important point is to go ahead and hold the Olympics next year to show the pandemic has not defeated humanity. 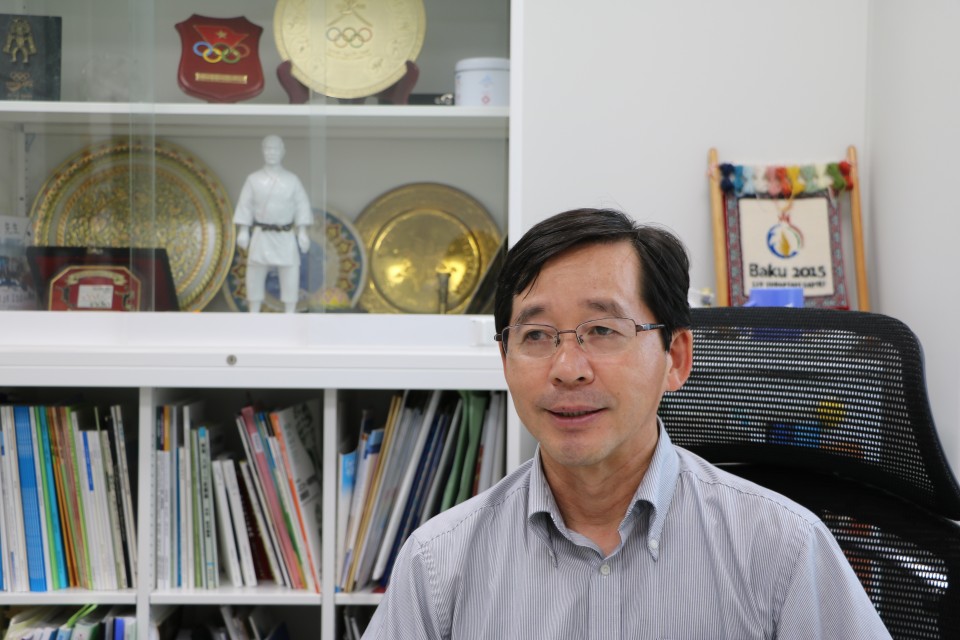 Hisashi Sanada, a professor of health and sport sciences at the University of Tsukuba, gives an interview at his office in Tsukuba, Ibaraki Prefecture, on July 22, 2020. (Kyodo)

(Hisashi Sanada is a professor of the Faculty of Health and Sport Sciences at the University of Tsukuba and head of the Tsukuba International Academy for Sport Studies. He also serves as a counselor to the CEO of the Tokyo Organizing Committee of the Olympic and Paralympic Games.)