Even as Thailand struggles to bounce back economically from the COVID-19 pandemic, the kingdom appears to be on the cusp of a new round of political unrest, this time involving its disaffected youth.

The military-backed government of Prime Minister Prayut Chan-o-cha is facing a series of street protests staged mainly by students, rather than by seasoned activists. 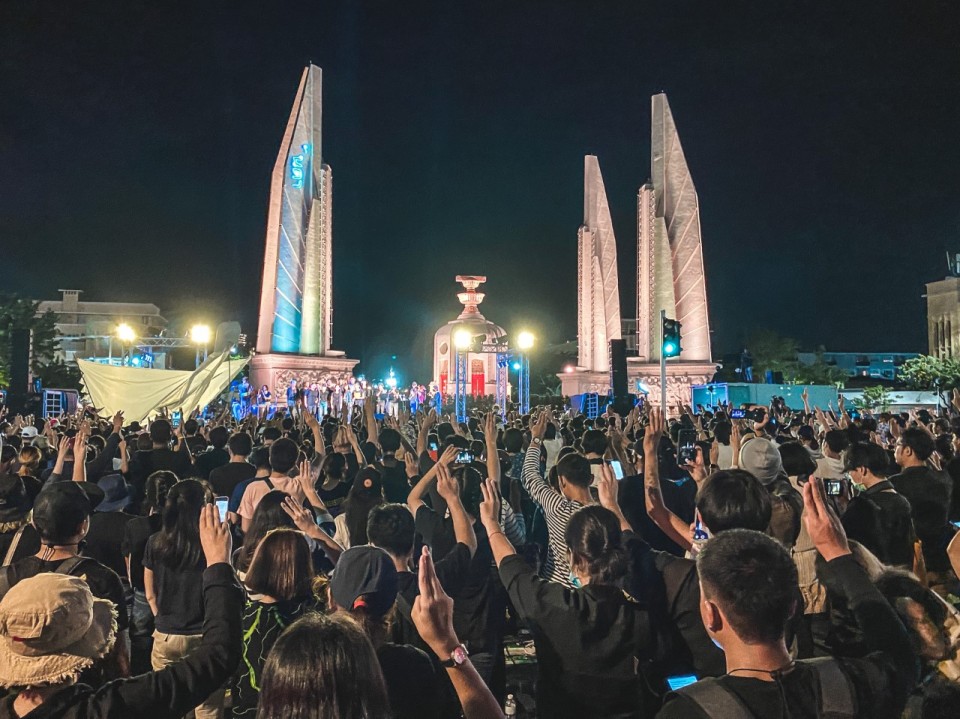 Thousands of protesters sing "Do you hear the people sing" while showing a three-finger gesture in front of the Democracy Monument in Bangkok on Aug. 16, 2020. (Kyodo)

They are demanding not only an end to dictatorship, as they see it, but also reform of the monarchy, a highly sensitive subject in a country where that venerable institution has traditionally provided an important pillar of stability.

The protests have continued for months despite a state of emergency that remains in effect due to the coronavirus pandemic.

Specifically, the students and other activists want the government to stop harassing people who exercise their democratic rights and allow them to peacefully express their views on politics.

They also want a new constitution to be drawn up to replace the current military-sponsored one -- or at least have the current "undemocratic" one amended -- and the House of Representatives to be dissolved to pave the way for a fresh election.

On July 18 and Aug. 16, two of the largest anti-government rallies in years took place at Democracy Monument in Bangkok, attended by tens of thousands. Small-scale protests have occurred at schools and university campuses around the country.

The protesters often imitate the main character in the Hollywood movie The Hunger Games by flashing a three-finger salute as a symbol of resistance against the current government.

So far, Prayut, who led the coup as army chief and was elected prime minister by parliament in June 2019 following a general election in March of that year, has generally tolerated the rallies, allowing the students to voice their say through peaceful protest.

But signs of a crackdown have emerged.

Last Thursday, for example, police arrested 11 dissidents, including human rights lawyer and prominent activist Arnon Nampha, and charged them with sedition and inciting public unrest for their involvement in the July 18 rally.

Also among them was Dechathorn Bamrungmuang, founder and member of Rap Against Dictatorship, a well-known hip-hop group that performed at several anti-government protests.

Thailand has also seen a spate of "flash mob" protests in which people assemble suddenly and then quickly disperse.

The unrest began in February when Future Forward Party, a newly formed opposition led by businessman-turned-politician Thanathorn Juangroongruangkit, was disbanded by the Constitutional Court despite finishing third in the election.

Many youth saw the ruling as unjust and politically motivated, and began pressing the government on political matters, taking particular aim at the 2017 constitution under which Prayut-led junta appointed all 250 senators in the upper house. 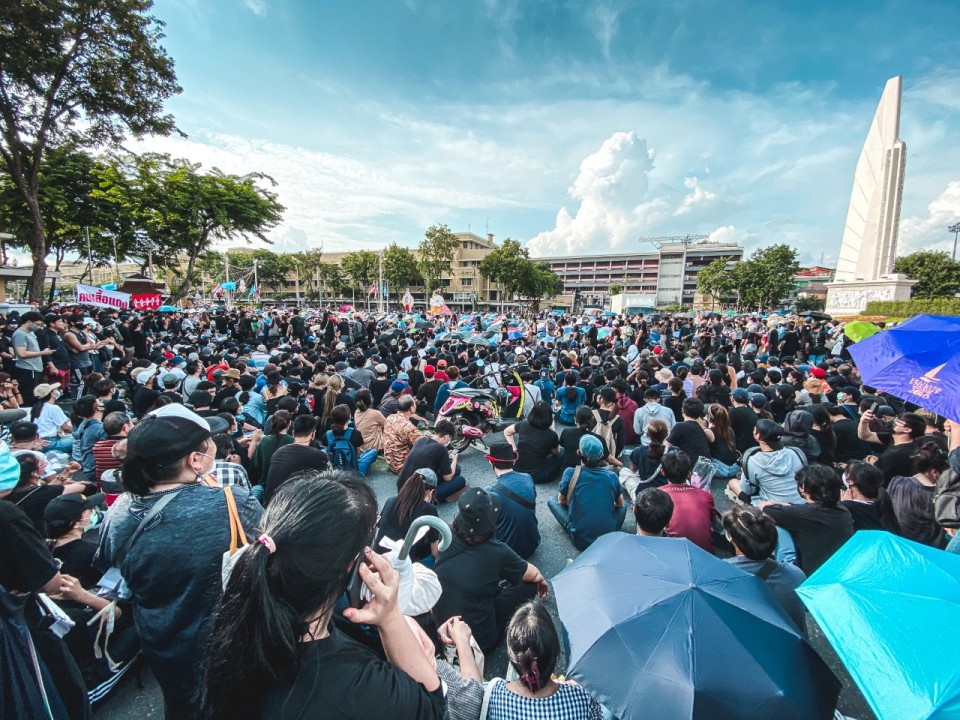 Thousands of protesters gather at the Democracy Monument in Bangkok, calling for a new constitution, dissolution of parliament and end to threats on civil liberties on Aug. 16, 2020. (Kyodo)

The handpicked senators were empowered to elect the prime minister, which was a vital factor in enabling Prayut to remain in power as the head of a civilian government even though his Palang Pracharath party only came in second in the polls.

Pita Limjaroenrat, the leader of Move Forward Party which has taken up the mantle of Future Forward and is allied with the biggest opposition party, Pheu Thai, told Kyodo News his party supports the youth in seeking charter changes and in taking the government to task for failing to solve the country's economic woes.

"The younger generation has seen political and economic crises for the past 10 years...They have seen this as a revolving door of power struggle, rather than something developing or taking Thailand to the future," Pita said.

One rally participant, an 18-year-old girl who declined to give her name, said she wants to see an administration change, allowing the new generation with knowledge obtained from abroad to run the country.

Echoing her calls for change, a 17-year-old boy who also sought anonymity said Thailand still does not enjoy full democracy, so wants to see political change as well as education reform.

While the political demands are the priorities, another group of students have put themselves at particular risk by proposing reform of the monarchy, claiming it has long been the root of political problems in Thailand.

Their proposals include abolishment of the draconian "lese-majeste" law, which makes criticism of the monarchy punishable by up to 15 years in prison.

Many such protesters view King Maha Vajiralongkorn, the son of the widely revered late King Bhumibol Adulyadej, as supportive of the Prayut government. They want the wealthy sovereign's powers curbed, his palace's finances audited and participation in politics banned.

In their 10-point manifesto, they also seek investigations into the killings of critics of the monarchy and the end of royal endorsement of military coups.

However, their calls have sparked a backlash from the many Thais who view the monarchy as a sacred institution, conflating "Thai-ness" with loyalty to the king. Indeed, widespread reverence characterized the reign of King Bhumibol, the current king's father, who died in October 2016 after ruling for seven decades.

Sondhi Limthongkul, a former media mogul and leader of the royalist, right-wing People's Alliance for Democracy, has warned the students that their proposals on monarchy reform could force them into the corner as the topic is off-limits.

"It is fine if you want to stage protest for a constitutional amendment or hold a rally against the government, but not the monarchy," Sonthi said, noting how protest leaders in the past, including himself, have faced lese majeste charges regardless of which side they supported.

Over a decade ago, Sonthi led of a coalition of protesters against populist Prime Minister Thaksin Shinawatra, who was later ousted as prime minister in a 2006 military coup amid one of the most tumultuous periods of Thailand's modern history.

Back then, anti-Thaksin protests were held almost daily by middle-class, royalist urbanites distinguished by their yellow-colored shirts, while Thaksin's rural-based supporters, known as the "red shirts," held counter-rallies that continued for several years after his ouster.

In the face of strong pro-monarchy sentiment, the main group of current antigovernment protesters has opted to de-emphasize monarchy reform, focusing on their key political demands and mentioning only briefly about their dream of Thailand having a monarchy "which is truly under the constitution."

Stithorn Thananithichot, director of Office of Innovation for Democracy at King Prajadhipok's Institute, a conservative think tank, said one bright spot on the horizon is that the Prayut government appears amendable to the idea of constitutional revision.

But he too warned that if protesters take their demands too far by continuing to publicly broach the taboo topic of monarchy reform, their efforts could fall flat, considering most Thais' long-standing bond with the royal institution.