Osaka Prefecture confirmed a record 225 new cases of novel coronavirus infection Thursday, with other urban areas also reporting record daily figures as the virus continues to spread in parts of the country.

The latest figure exceeded the previous daily record of 221 logged in Osaka on July 29, bringing its cumulative total to around 5,000. The prefecture has seen around 200 new cases almost every day in the past week through Wednesday.

After bringing the outbreak under some degree of control in May, Japan has seen a resurgence of infections in recent weeks, especially in urban centers such as Tokyo and Osaka. On Thursday alone, 1,480 infections were reported nationwide, increasing from 1,345 cases the previous day. 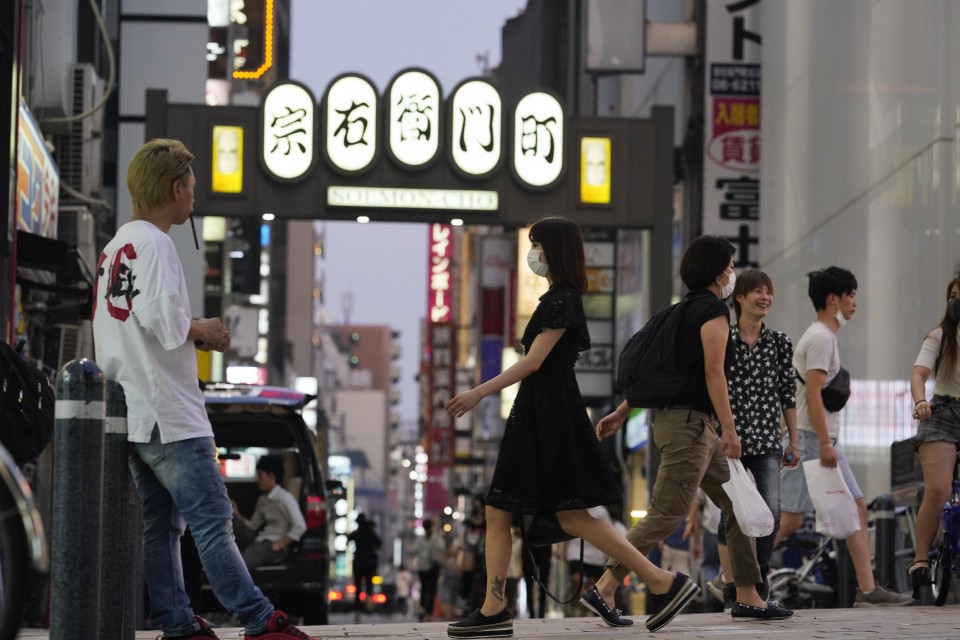 People wearing face masks walk in Osaka's Minami area on Aug. 4, 2020. The business hours for nightlife establishments in Minami will be shortened between Aug. 6 and 20 amid the continued spread of the novel coronavirus. (Kyodo)

Meanwhile, the Tokyo metropolitan government confirmed 360 new cases of coronavirus infection, up from 263 the previous day.

The latest figure brought Tokyo's cumulative total to over 14,600. The capital, which has a population of nearly 14 million and the highest number of infections in the country, saw a record 472 cases reported on Saturday.

In the week through Monday in Tokyo, infections among cohabitants accounted for 26 percent of known infection routes, particularly among those in their 40s, followed by nightlife establishments at 19.3 percent and workplaces at 17.9 percent.

The Tokyo metropolitan government is considering designating two hospitals to exclusively treat patients infected with the novel coronavirus following the recent rise in cases, according to sources familiar with the matter.

Tokyo Gov. Yuriko Koike has also asked residents to refrain traveling to hometowns and elsewhere during the upcoming Bon holidays.

"This year is a special summer. I want people to interact with their long-distance family over the phone or online," she said at a press conference Thursday.

Her comments, just days after Chief Cabinet Secretary Yoshihide Suga said the government had no plans to ask people to forgo summer travel due to the virus, once again sent mixed messages to Tokyoites.

Prime Minister Shinzo Abe on Thursday also reiterated there is no immediate need to declare another state of emergency in Japan despite the recent resurgence of infections, citing a low proportion of serious cases and better equipped hospitals. 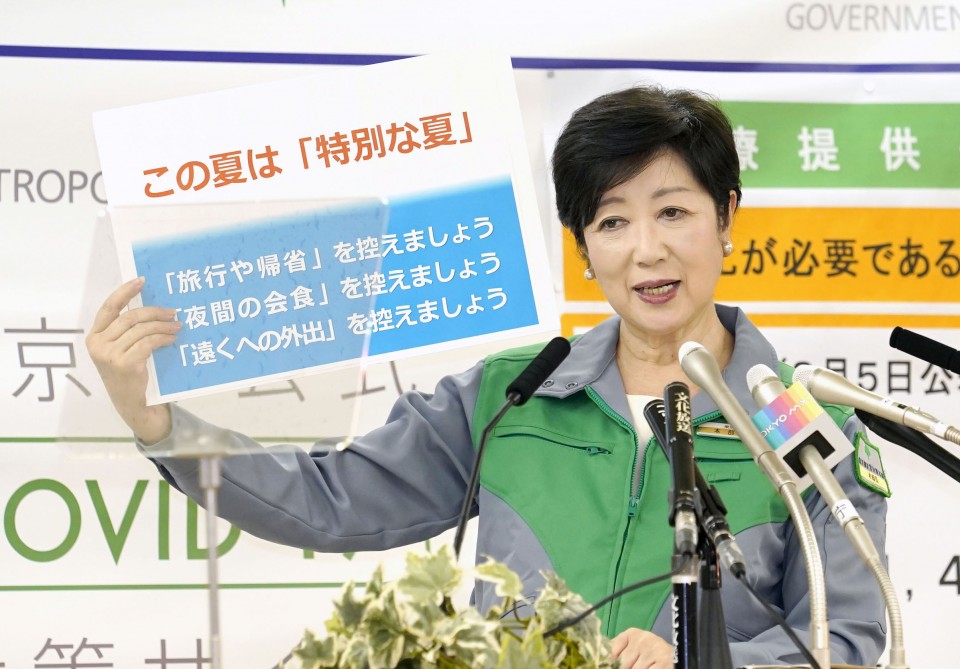 Tokyo Gov. Yuriko Koike meets the press in Tokyo on Aug. 6, 2020, asking citizens to refrain as much as possible from leaving the capital during the coming Bon summer holiday season amid the coronavirus pandemic. Tokyo confirmed over 300 new virus cases the same day. (Kyodo)