U.S. Ambassador to Japan nominee Kenneth Weinstein on Wednesday called on Japan to take a greater role in the alliance amid China's growing assertiveness, while vowing to pursue a "comprehensive trade agreement" between Washington and Tokyo to deepen the bilateral economic ties.

"As we engage in this strategic competition (with China) in the Indo-Pacific, all of us need to do more...Japan needs to do more," the 58-year-old head of the Hudson Institute, a Washington-based conservative think tank, told a Senate committee.

With President Donald Trump pushing for Japan to pay more of the costs associated with hosting U.S. troops, Weinstein noted that Japan has significantly increased its purchases of U.S. military equipment, and said he is "optimistic" that the upcoming talks on host-nation support will come to "some sort of a fruitful conclusion." 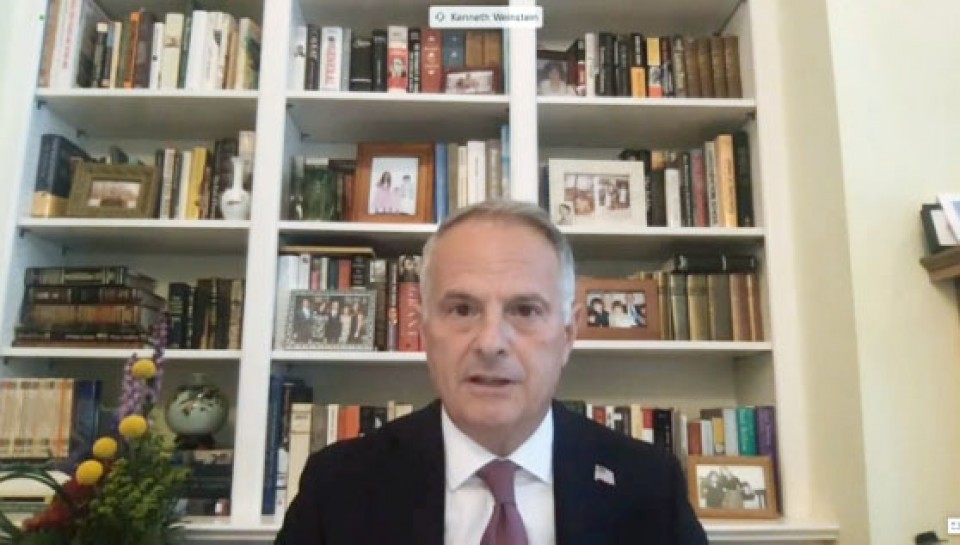 U.S. Ambassador to Japan nominee Kenneth Weinstein, head of Washington-based conservative think tank Hudson Institute, speaks during a hearing at the Senate Committee on Foreign Relations that was held online on Aug. 5, 2020. (Kyodo)

The hearing at the Senate Committee on Foreign Relations took place after Trump announced in March his intention to nominate Weinstein as the U.S. envoy to Japan, a post which has been vacant since William Hagerty stepped down in July last year to run for the Senate. The nomination requires Senate approval.

In written testimony submitted to the committee, Weinstein reaffirmed the U.S. government's position that the U.S.-Japan alliance has served as the "cornerstone" of peace and security in the Indo-Pacific region and recognized that the 50,000 U.S. military personnel and other defense assets based in Japan enable "both countries to ensure peace and stability in the region and beyond."

While welcoming the increases in security cooperation and Japan's defense spending over the past years, he added, "If confirmed, however, I will encourage Japan to strengthen its capabilities even further and shoulder greater responsibility within the alliance."

Among the security challenges the two countries face, he pointed to China's "destabilizing actions" both in the Indo-Pacific region and globally, including what he called Beijing's "increased aggressiveness" around the Japanese-controlled Senkaku Islands in the East China Sea.

Chinese ships have been spotted near the uninhabited islets, which Beijing claims under the name Diaoyu, for more than 100 consecutive days through Sunday, until an approaching typhoon made it difficult for them to continue sailing in the waters.

Weinstein also said he is eager to work with Japan "in its continued efforts to ensure the steady implementation of the realignment of U.S. forces in Japan," especially over the planned relocation of a U.S. air base within the southern island prefecture of Okinawa.

Construction work has been under way for transferring the U.S. Marine Corps Air Station Futenma from a crowded residential area in Ginowan to the Henoko coastal area of Nago, in accordance with an agreement reached between Washington and Tokyo in 1996.

But the plan continues to face opposition from the people of Okinawa who are upset about the heavy burden they bear in hosting the bulk of U.S. military facilities in Japan. Locals want the Futenma base to be moved outside the prefecture.

Weinstein recognized that the base burden falls "disproportionately on Okinawa" which accounts for less than 1 percent of Japan's land mass.

On the trade front, Weinstein said pursuing the "phase two" negotiations with Japan, following a bilateral tariff-cutting deal that entered into force on Jan. 1, provides the "United States the opportunity to further deepen our critical economic relationship."

"We've had the phase one agreement...but we really do need to go further, particularly in the auto sector," Weinstein said, without elaborating further. He appears to have been referring to addressing nontariff barriers.

The phase one deal granted greater market access to U.S. agricultural products while giving Japanese automakers respite from the threat of additional tariffs.

Weinstein, an expert on East Asia, is believed to have close ties with Japanese Prime Minister Shinzo Abe, as the two have met multiple times in Japan.