Over 1,200 more coronavirus cases reported in Japan at holiday peak 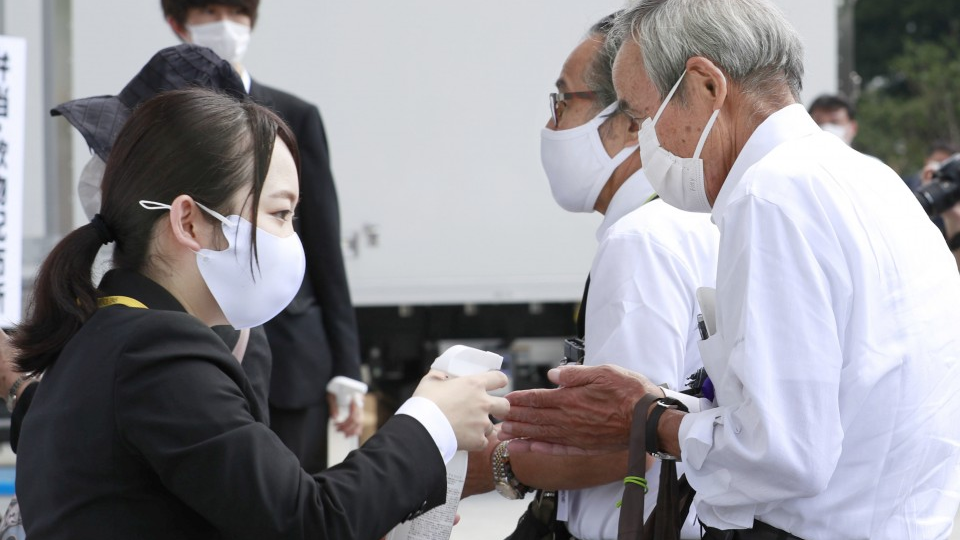 A man has his hands disinfected to prevent coronavirus infection before entering Nippon Budokan hall in Tokyo, the venue for a memorial ceremony marking the 75th anniversary of Japan's surrender in the war, on Aug. 15, 2020. Around 540 people took part in the ceremony -- the lowest attendance since the event started in 1963 -- with the government limiting the number of people present amid the novel coronavirus pandemic. (Kyodo)

TOKYO - Japan on Saturday reported more than 1,200 new cases of the novel coronavirus, topping the 1,000 mark for the third day, with cluster outbreaks and infections at home occurring at the height of the summer holiday season.

The tally compares with 1,361 the previous day after surpassing 1,000 cases for the first time on Thursday since Aug. 9. The cumulative total stood at more than 55,830, including about 700 from the Diamond Princess cruise ship that was quarantined in Yokohama in February. The nationwide death toll stood at 1,106 after seven more deaths were confirmed on the day.

Tokyo saw the country's highest number of 385 new cases, above 380 for the second straight day. It has also seen infections in three digits every day in August.

The capital saw new daily cases in the range of 100 to 200 from Monday, but the figure climbed to 389 on Friday, surpassing 300 for the first time since Aug. 9.

Among Tokyo's 385 cases, transmission routes were confirmed in 136, of which nearly half or 64 were caused by infections at home. 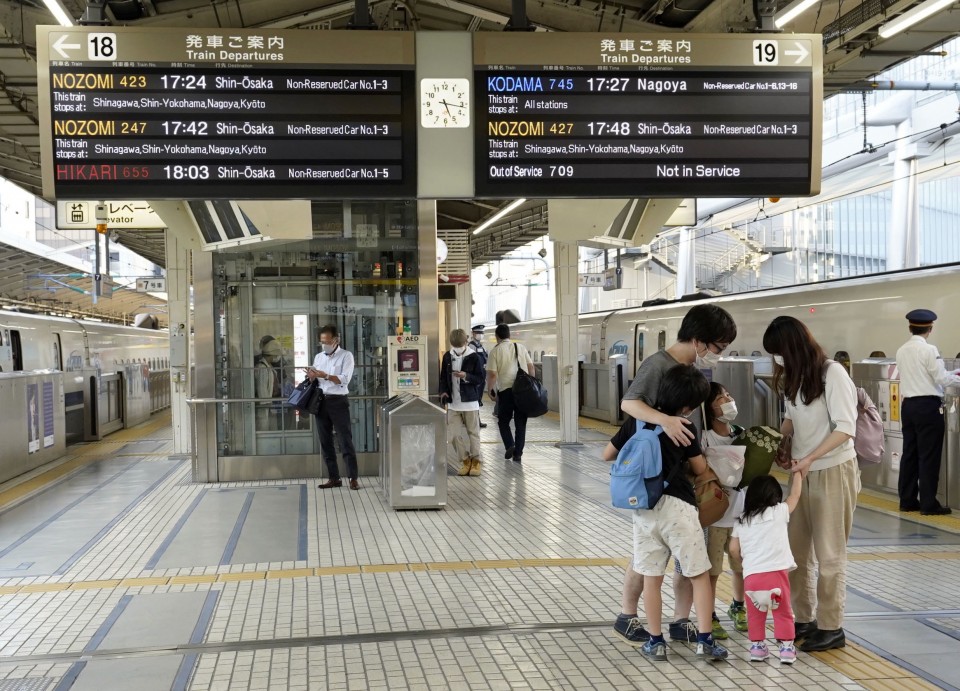 Fewer people than usual are seen on a Shinkansen bullet train platform at JR Tokyo Station on Aug. 15, 2020, during the Bon summer holiday season amid the continued spread of the novel coronavirus. (Kyodo)

An official at the Tokyo metropolitan government said such infections likely occurred "as families are spending more time together due to the summer holidays." The official called for thorough precautionary measures especially when living with elderly people.

Tokyo, which maintains its alert at the highest of four levels, meaning "infections are spreading," has asked residents to refrain from traveling or returning to their hometowns to visit relatives during the holidays.

It has also requested establishments serving alcohol and karaoke venues to close by 10 p.m. through the end of August to curb the spread of the virus.

In Kanagawa Prefecture neighboring Tokyo, 136 cases were reported, a record-high for a single day, as it topped the 100 mark for the third straight day.

The tally includes a cluster of infections at a wrestling club at Nippon Sport Science University in Yokohama, where 15 members and three former members were newly found to be coronavirus positive on top of two found positive earlier.

A group infection has also occurred at an elementary school in Atsugi, another city in Kanagawa, where a teacher and a pupil were found infected, adding to infections of four teachers and 10 pupils reported earlier.