FOCUS: Chinese keener to save money amid virus crisis, deja vu of Japan

As is the case with Japan that experienced a decades-long economic slump after the "bubble burst" in the 1990s, Chinese people have become more willing to save rather than spend their money in the wake of the coronavirus crisis.

A propensity to save, in general, would weigh on corporate profits with consumer spending shrinking, which could prompt companies to cut payrolls and slash employment. Such a move would put downward pressure on the broader economy. 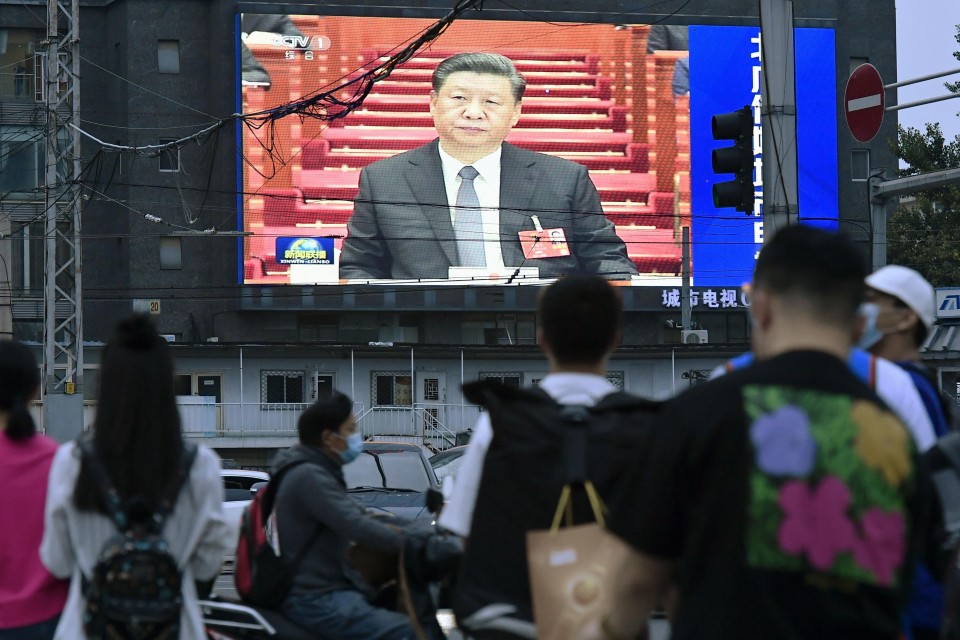 A large screen on a street in Beijing shows Chinese President Xi Jinping attending the opening ceremony of the National People's Congress at the Great Hall of the People in the Chinese capital on May 22, 2020. The annual parliamentary session, which usually takes place for around 10 days from March 5, was postponed this year due to the spread of the new coronavirus. (Kyodo)

In China, meanwhile, the Communist government led by President Xi Jinping has been trying to prop up the virus-hit economy by increasing public expenditures and stimulating state-owned firms to boost investment.

Monetary easing by central banks in major countries, aimed at preventing the pandemic from bringing about a depression, has also caused an excessive liquidity flow to the Chinese financial market, sparking concern over a possible asset-inflated bubble in the nation.

Hikes in property and security prices in the absence of growth in corporate profits and wages would widen the gap between the haves and have-nots. Expanding economic inequality may make low- and middle-income earners more anxious about their future and keener to save.

"If consumption remains weak in the Chinese market that has a population of 14 million, this would deal a crushing blow to the already sluggish economy," a central bank official in Beijing said.

At this year's annual session of the National People's Congress, China's top legislature, held in May, the government of the world's second-largest economy pledged to "give priority to stabilizing employment and ensuring living standards."

The official said, "Depending on corporate investment alone for economic recovery is risky. In addition to maintaining employment, China should make more efforts that lead to higher wages, prod consumers to spend more and alleviate social unrest."

The Japan Research Institute in Tokyo also warned in a report that investment-led economic policy "would reignite an excessive debt problem and lower investment efficiency, probably hurting the sustainability of economic growth."

The central bank official said, "In the worst-case scenario, we might have a case of deja vu in China."

On Wednesday, government data showed that China's economy grew 3.2 percent from a year earlier during the April-June period on the back of a rebound in production and investment, marking the first expansion in two quarters.

But retail sales of consumer goods plunged 11.4 percent, and the total value of imports dropped 3.3 percent in the first half of this year, signaling that household spending has not improved after the outbreak of the new pneumonia-causing virus.

In contrast, a survey conducted by the People's Bank of China, targeting 20,000 depositors across the country, showed 53.0 percent are in favor of savings in the January-March period, up 7.3 percentage points from the previous quarter.

According to the central bank's survey, 52.9 percent said they prefer saving to spending even in the three months through June, although the increase in infections is believed to have peaked in late February in China.

It is the first time since the survey started in 2002 that more than 50 percent of respondents said they favor savings. The Japan Research Institute said Chinese households "have stayed vigilant" against the unprecedented crisis.

The virus that causes respiratory disease COVID-19, first detected in the central Chinese city of Wuhan, has so far sickened around 83,500 people in the mainland and killed more than 4,600.

"A full-fledged recovery in consumer spending is unlikely for the time being" in China, the think tank said.

For several years after he became China's president in 2013, Xi accelerated structural reforms to normalize the financial system, with corporate debt expanding and a bursting of asset-inflated bubbles looming.

China, however, has changed course after the economy showed signs of slowing down following a prolonged tit-for-tat trade dispute with the United States. Recently, Beijing has continued to loosen its monetary and fiscal grip, as domestic demand has been languishing.

Toru Nishihama, chief economist at Dai-ichi Life Research Institute in Tokyo, said China would be forced to fight the aftermath of a bubble down the road "unless the real economy picks up."

In Japan, people tightened their purse strings with hopes for economic growth waning after the bubble burst, which became one of the reasons that the economy sank into a deflationary recession, pundits said.

On another front, drastic monetary easing by the Bank of Japan has pushed up stock and real estate prices, helping asset holders earn more money, while wages of ordinary workers have not risen.

Under circumstances in which there is a fear of the future, including growing old, Japanese people do not aggressively use money even now, and this is a factor as to why the world's third-biggest economy has yet to return to an inflationary growth track, they added.

Japan's Cabinet Office also said that the nation took longer than other countries to deal with "the negative legacies of the bubble economy" such as bad loans and excessive debt, triggering the disruption of fund flows, snail-paced growth and weak demand.