China has ordered the United States to shut its consulate general in Chengdu in retaliation for Washington's decision to force closure of Beijing's equivalent liaison office in Houston, the Foreign Ministry said Friday.

In the morning, the ministry "informed the U.S. Embassy in China of its decision to withdraw its consent for the establishment and operation of the U.S. Consulate General in Chengdu," it said.

The consulate general in the southwestern city is in charge of watching issues such as Tibet, which was invaded by Beijing in 1950. Chinese President Xi Jinping has pledged to fight against separatism in the restive region.

The shutting of the liaison office in Chengdu would make it more difficult for the United States to deal with human rights affairs in Tibet and monitor China's military deployment in the western region, diplomatic sources said.

"The U.S. move seriously breached international law" and "the basic norms of international relations," the ministry said, adding, "The measure taken by China is a legitimate and necessary response to the unjustified act by the U.S."

"The current situation in China-U.S. relations is not what China desires to see, and the U.S. is responsible for all this," it said.

On Friday, Foreign Ministry spokesman Wang Wenbin also told reporters in Beijing that China has requested the United States "to pull down the wrong decision," saying the consulate general in Houston is "still operating." 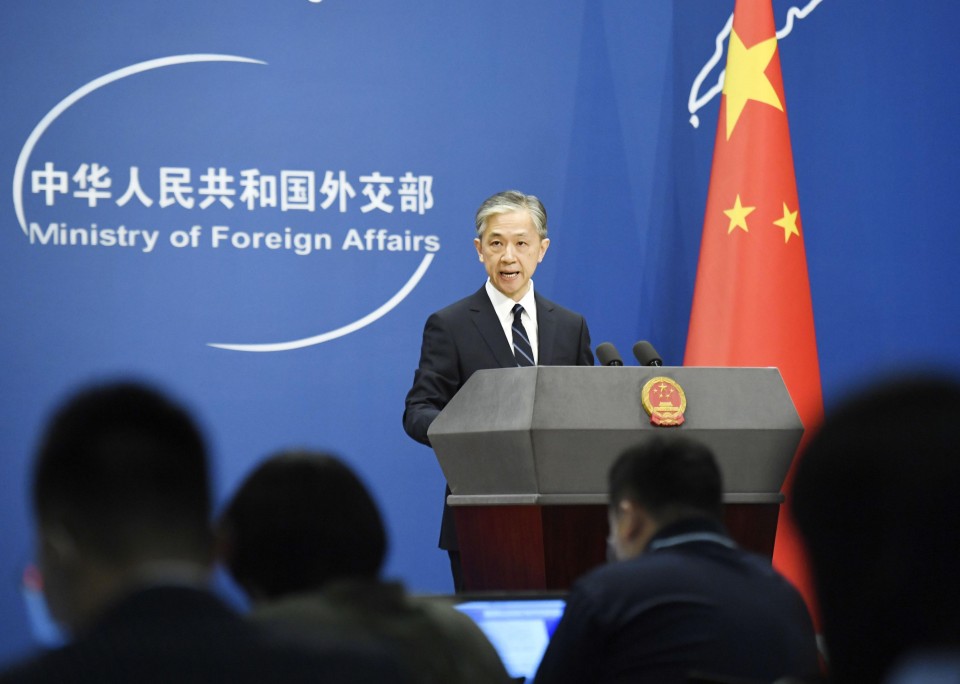 China and the United States have been clashing over several economic and security matters, including business practices, trade, state-of-the-art technology, Hong Kong and the South China Sea, as well as the origins of the novel coronavirus.

Beijing has said that Washington on Tuesday "abruptly demanded" that China's Consulate General in Houston "cease all operations and events," reprimanding the United States for "seriously" violating international law.

Chinese state media reported that Washington gave Beijing 72 hours to close the consulate general in the southern state of Texas.

Wang said, "Diplomacy is equal," suggesting that China has imposed the same conditions on the United States.

On Wednesday, the administration of U.S. President Donald Trump said in a statement that the closure had been ordered "to protect American intellectual property and American's private information."

Trump said later in the day that it is "always possible" more Chinese diplomatic missions in the United States could be shut, amid accusations of spying.

Earlier, U.S. media, citing the Houston Police Department, reported that documents were being burned in the courtyard of the consulate general in the city on Tuesday night.

"I guess they were burning documents or burning papers and I wonder what that's all about," Trump said in a press conference.

U.S. authorities recently indicted two Chinese hackers suspected of stealing hundreds of millions of dollars' worth of trade secrets and other valuable information from firms worldwide, and also targeting companies developing vaccines for the coronavirus.

Sino-U.S. ties have deteriorated significantly since China decided to enact a national security law for its territory Hong Kong, sparking fears of an erosion of human rights and freedoms in the former British colony.

On Thursday, U.S. Secretary of State Mike Pompeo urged countries around the world and the Chinese people to join U.S. efforts to end what he lambasted as Beijing's "tyranny," underscoring Washington's mounting antagonistic stance toward its rival.

The freedom-loving nations "must induce China to change in more creative and assertive ways, because Beijing's actions threaten our people and our prosperity," Pompeo said in a speech, adding Xi is a "true believer in a bankrupt totalitarian ideology."

On July 14, Trump signed an order to fully end the special treatment extended under U.S. law to Hong Kong, saying he would hold China accountable for its "oppressive actions" against the people of the region.

He has announced that the United States will withdraw from the World Health Organization, labeling the Geneva-based U.N. agency as a Chinese "puppet" and criticizing it for pushing Beijing's "misinformation" about the coronavirus outbreak.

Bilateral relations were further strained when the U.S. government called Beijing's claims to offshore resources across most of the South China Sea "completely unlawful."

China ordered by U.S. to close consulate in Houston