The Tokyo metropolitan government reported 237 new cases of the novel coronavirus on Tuesday, Gov. Yuriko Koike said, as the capital struggles to strike a balance between restarting the economy and controlling infections.

Tokyo's cumulative total reached 9,816, nearing 10,000, as the single-day figure, which compared with 168 cases on Monday, topped the 200-mark for the first time in three days.

Across the country, more than 570 new infections were reported Tuesday, pushing up the cumulative number of patients to around 27,000. 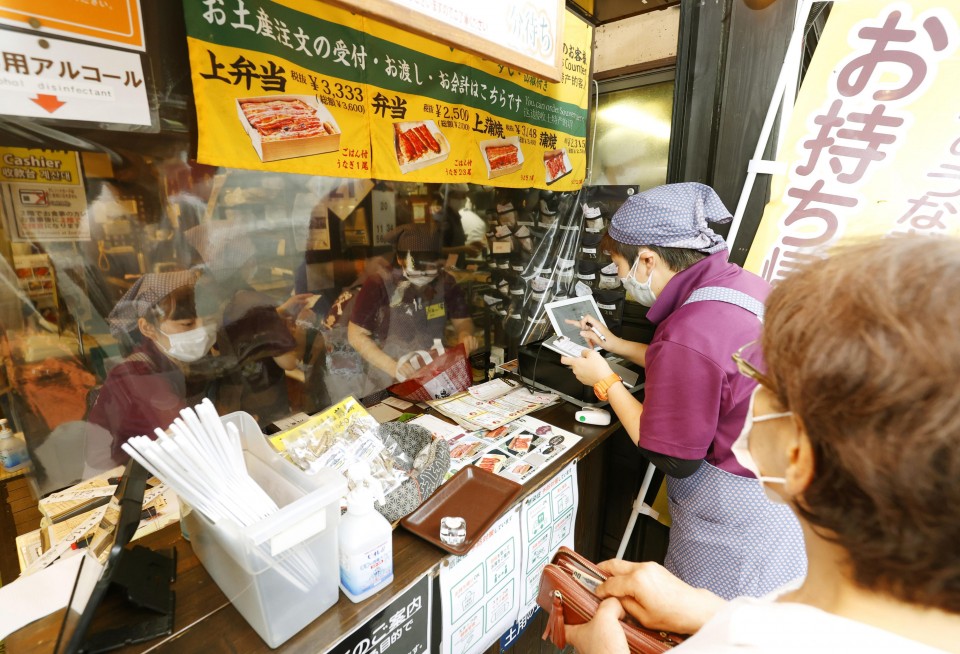 A woman (front) takes out broiled eel at a restaurant in Narita, near Tokyo, on July 21, 2020, known as a day to eat eel in Japan. A clear sheet was installed to prevent the spread of the novel coronavirus. (Kyodo)

Since the government fully lifted a state of emergency in the country in late May, the number of additional infections has been on an uptrend in Tokyo and other urban areas.

This month, Tokyo has seen new daily cases in triple digits on all but two days.

The Tokyo metropolitan government reported a record 293 cases on Friday.

On July 15, the metropolitan government raised its alert for the pandemic to the highest of four levels, meaning "infections are spreading."

Out of the around 2,400 hospital beds secured by the Tokyo government for coronavirus treatment, some 950 were occupied amid a resurgence of the pandemic, Koike said. The number of people testing positive and requiring hospitalization has been on the rise since late last month.