Ozeki Takakeisho withdrew from the ongoing July Grand Sumo Tournament on Thursday after he was diagnosed with an injury to the medial collateral ligament of his left knee.

Takakeisho posted his eighth win a day earlier to escape his second career "kadoban," or demotion from the second-highest rank of ozeki to the third tier of sekiwake. 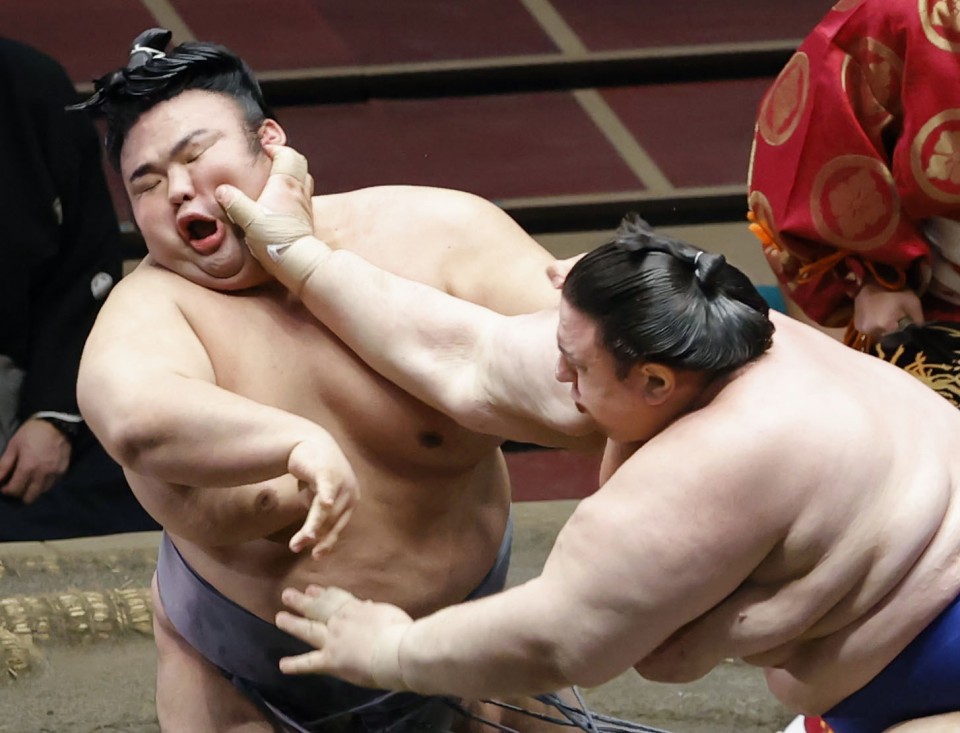 Takakeisho (L) and Aoiyama fight on the 10th day of the July Grand Sumo Tournament at Ryogoku Kokugikan in Tokyo on July 28, 2020. (Kyodo)

A kadoban-threatened ozeki needs to finish with a winning record in order to avoid demotion.

The 23-year-old Takakeisho, a Chiganoura stable fighter, is the fourth makuuchi division wrestler to pull out of the 15-day meet at Tokyo's Ryogoku Kokugikan after yokozuna Kakuryu and rank-and-filers Abi and Kotonowaka.

It is the first time since last year's Nagoya meet in July that Takakeisho will miss all or part of a grand tournament, and fifth time overall. His scheduled opponent for Thursday, komusubi Daieisho, wins by forfeit.

Takakeisho's stablemaster Chiganoura said the wrestler aggravated an injury he sustained early this month. He is required to undergo four weeks of treatment, according to medical reports submitted to the Japan Sumo Association.

"He told me (last night) he's in too much pain to wrestle. It seems like he was wrestling through pain since Day 8. I'm really sorry for the fans. I'm sure he's just as disappointed," Chiganoura said.

"Takakeisho rarely complains of pain so it must really hurt. His lack of aggressiveness (recently) has to do with both the knee pain and not training enough. I hope he gets treated and looks ahead with optimism."

The crowd size for the Tokyo tournament has been reduced to a quarter of full capacity, or about 2,500 people each day. The tournament was moved from Nagoya to Tokyo to help limit the spread of the coronavirus.