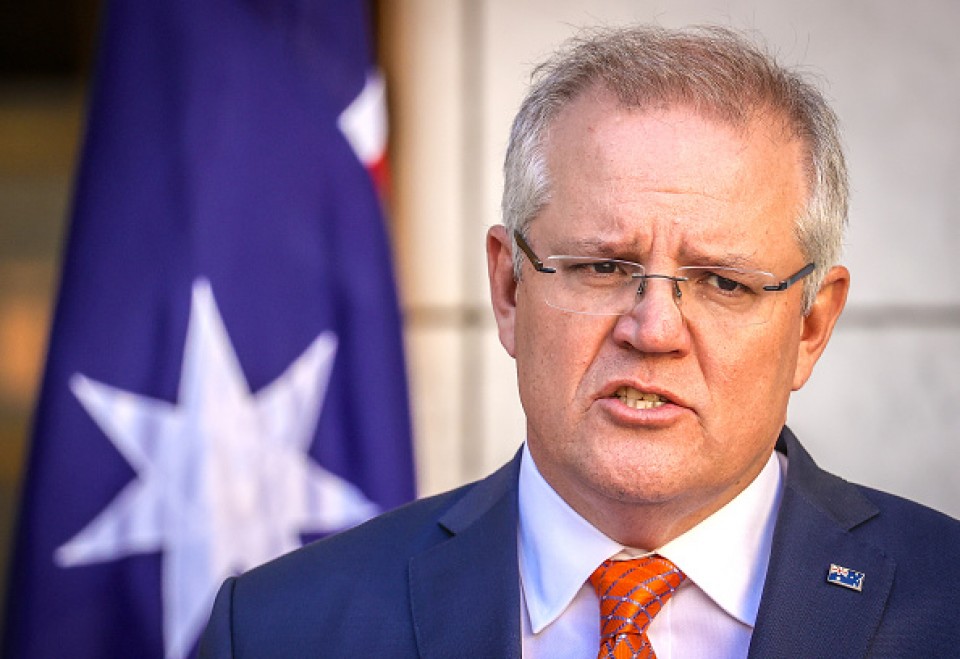 Australian Prime Minister Scott Morrison speaks during a media conference at Parliament House on July 9, 2020 in Canberra, Australia. Australia has suspended its extradition policy with Hong Kong in light of recent changes to security laws. Australia will also offer visas for residents of Hong Kong to apply for residency in Australia.(Getty/Kyodo)

"Our decision to suspend the extradition agreement with Hong Kong represents an acknowledgment of the fundamental change of circumstances in relation to Hong Kong because of the new security law," Morrison said at a press conference in Canberra.

The law "undermines the one country two systems framework and Hong Kong's own basic law and the high degree of autonomy guaranteed in the Sino-British joint declaration," he said.

The national security law, enacted by Beijing and imposed on Hong Kong last week, outlaws acts of secession, subversion, terrorism and collusion with foreign forces. It also allows suspects to be transferred to mainland China for prosecution.

"China urges Australia to immediately change course and stop interfering in Hong Kong affairs and China's internal affairs in any way to avoid further damage to Sino-Australian ties," he said.

Morrison also announced an extension to skilled and graduate visas, allowing Hong Kong citizens to stay in Australia for an extra five years, with a pathway to permanent residency.

The change applies to current and future visa holders and takes effect immediately. There are roughly 10,000 Hong Kong citizens already in Australia on student or temporary work visas.

The government said it will also seek to attract international businesses that have their regional headquarters in Hong Kong, with incentives and visa packages to assist relocating staff.

Morrison's announcement comes hours after the Department of Foreign Affairs and Trade updated its travel advice for its citizens in or traveling to Hong Kong, warning Australians "could be deported or face possible transfer to mainland China for prosecution under mainland law."

"You could break the law without intending to. If you're concerned about the new law, reconsider your need to remain in Hong Kong," the travel advice said.

Later Thursday, New Zealand also announced it is "reviewing the settings" of its relationship with Hong Kong, including extradition arrangements, controls on exports of strategic goods and travel advice.

"Accordingly, the government has directed officials to review all of New Zealand's policy settings with respect to Hong Kong to determine the appropriate nature of our cooperation going forward."