After giving up the corporate life for one on the road, Japanese "campervangelist" Ikuma Nakagawa came to realize he wanted to help others experience the enlightenment #vanlife brings.

To do this, he found an idyllic locale to set up a hub where like-minded travelers can enjoy the best of their four-wheeled accommodations.

There, people who choose to travel in a way popularized on Instagram with the hashtag #vanlife, can park up and enjoy the rural charms of the fishing village that so captivated Nakagawa.

The idea was born from Nakagawa's days backpacking around the Japanese countryside nearly 10 years ago. While living on the road, he discovered the freedom, convenience and even creature comforts van life can allow.

Vandwelling, a portmanteau used to describe the practice of living or traveling in a vehicle that is also one's temporary or permanent home, has boomed in popularity as people increasingly pursue a relatively simple, responsibility-free lifestyle. 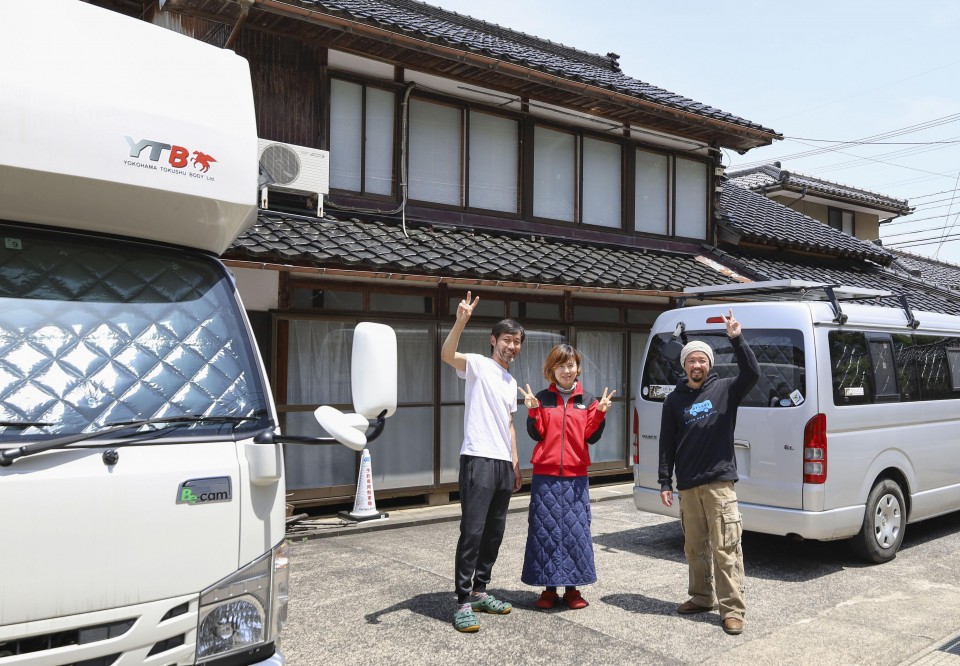 (Ikuma Nakagawa (R) poses for photos with visitors to his campervan facility Inaka Backpacker House in Anamizu, Ishikawa Prefecture, in May 2020)

The development of modern technology has also given many a way to work while on the road with just a laptop and internet connection, affording them the freedom to choose an office with a view.

"This is a lifestyle where it is possible to be both mobile and settled in the way you live," said Nakagawa. "I want to promote it and at the same time promote Okunoto," he said, referring to the northern part of the Noto peninsula where Anamizu is located.

The facility consists of a remodeled traditional rural share house and a parking area for campervans. A kitchen, living room, bathroom, shared office space, and Wi-Fi, among other amenities, are provided, allowing people to work and live at the site for a short period, or even longer.

One of the selling points for travelers is how cheap a stay at the campervan site is, Nakagawa said, while also extolling the benefits of escaping into a "non-urban" lifestyle.

Nakagawa explains that facilities like his that can support people who wish to stay in a campervan for a long period are still rare in Japan, though demand is growing.

While the #vanlife community is still relatively new to Japan, it is well established in places like the United States, Canada, New Zealand and Australia.

Like it has done to all other types of travel, the coronavirus pandemic has proved a roadblock to van nomads as locals worry about imported infections, causing them to shun outsiders.

Nakagawa also admitted to being hesitant to take in people lately unless he is confident they are showing no signs of COVID-19, the disease caused by the coronavirus.

"Honestly, I was really conflicted due to corona," he wrote on his blog about welcoming in April a couple driving a van displaying a Yokohama license plate. In order to allow them to stay, he set some conditions, requesting they keep their distance from people in the village for the time being and wear masks.

But as restrictions ease, Nakagawa believes more travelers will seek fixed locations where they can stay for a little longer than the relatively short-term stops allowed at roadside rest areas and auto campsites that only permit naps or overnight stays.

Like most other things, life on the road is glorified via Instagram, with people sharing their travels to beautiful spots with the #vanlife hashtag -- totaling some 7.3 million posts on the platform.

In Japan, there are over 4,000 posts on Instagram that include the #vanlifejapan hashtag, showing people who have chosen four wheels to holiday or travel in various parts of the country.

Nakagawa was born in Tokyo and raised in neighboring Kanagawa Prefecture. But he left Japan to study in the United States for high school and university, encouraged by his father, who described the United States as a country where "individual opinions are respected."

That experience led him to realize that "It may be good to take a road different from that of other people."

After returning to Japan, he worked for a decade as a publicist for various companies before quitting the corporate life in 2010 to embark on a two-and-a-half-year backpacking journey across Japan, seeking a life free of the typical Japanese hustle and bustle.

He discovered van life suited him as he traipsed across Hokkaido in northern Japan, Tokushima in the west, Nagasaki in the southwest, among other areas.

In 2012, Nakagawa set up a Toyota HiAce van as his "mobile base-camp" and realized that a full-time van life was not only possible, but preferable.

He may have to some extent given up the life of a nomad when he laid down roots with his family in Anamizu, but he did so while allowing others to live out their dreams of life on the road.

Even if he is not traveling himself, he takes great pleasure in promoting the charms of the local area to anyone who passes through.

"I wish to share the fascination of Okunoto with everyone. By offering a practical experience that is also enriching, I hope to show people how they can enhance their lifestyles," Nakagawa said.