Swedish Ambassador to Japan Pereric Hoegberg encourages more Japanese fathers to take advantage of the country's "very good" paid-leave system and devote themselves to child care, an experience he believes would lead them to becoming better workers back at the office.

The 52-year-old ambassador, who has taken such leave himself for his children currently aged 16 and 18, suggests being an independent caregiver and keeping some distance from the mother, based on mutual trust and close communication, could be a key to a fulfilling child care. 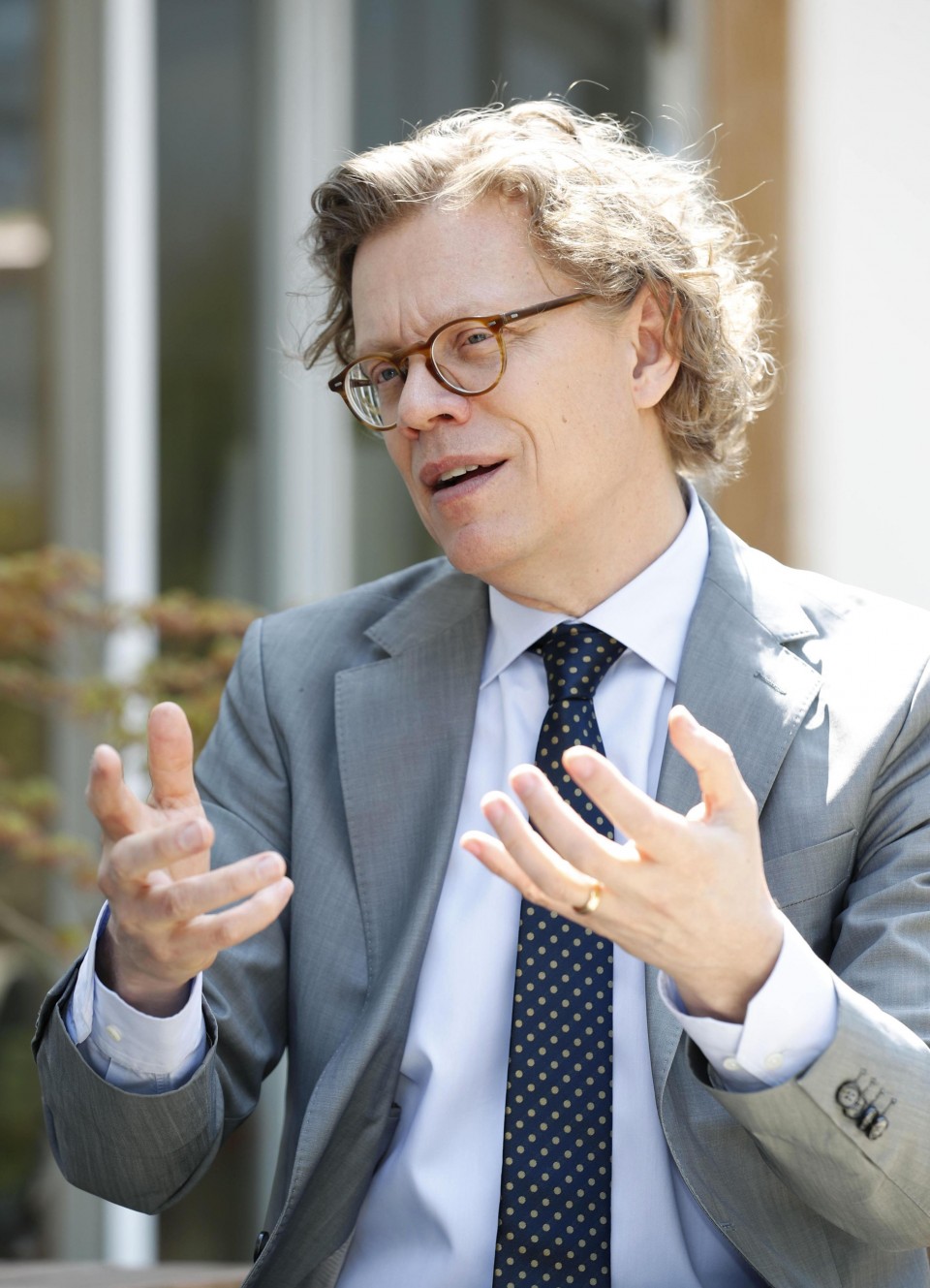 Swedish Ambassador to Japan Pereric Hoegberg speaks in an inteview with Kyodo News  at the Swedish Embassy in Tokyo on April 9, 2020. (Kyodo)

"I think it's important for equality (in a relationship) that it is not one person telling the other what to do, but equality is also about communication, responsibility," Hoegberg said in a recent interview with Kyodo News.

"I think men should be careful so that they don't make it too easy for themselves (when child-rearing)...Think and do what you think is right and find your own way," he said. "I also think it's important to push the mother out a little bit."

"If I asked my wife for advice, she almost got a bit upset; she felt I should decide," he said.

Hoegberg, who comes from a country where over 90 percent of fathers take paternity leave, said it is "surprising" that few men in Japan take advantage of what he calls a "very good parental system."

In Japan, male and female employees can retain 67 percent of their monthly wage for up to 180 days from the start of parental leave and 50 percent after 181 days until the child turns 1 year old, with extensions allowed until the child becomes 2 years old under certain conditions.

The U.N. Children's Fund said in a June 2019 report that out of 41 high- and middle-income countries, Japan offered the longest full-rate equivalent paternity leave at 30.4 weeks.

But while the government aims to raise the ratio of male employees taking childcare leave in the private sector to 13 percent by the end of next March and 30 percent by fiscal 2025, the level in fiscal 2018 was well below the target at 6.16 percent.

"It's good for the (Japanese) economy to get more women out in the workforce," the ambassador said. "More bosses need to let the fathers take paternity leave and maybe more mothers need to proudly say 'I am working, my husband or partner is home with a child.'"

While Hoegberg said that during paternity leave he talked about everything with his wife and they helped each other out, "She didn't tell me what to do, what to cook, what to do during the day."

"It was my responsibility and I felt the same way when she was home. She did what she needed to do. So it's a lot of communication and trust," he said.

Hoegberg revealed an "accident" during his paternity leave that taught him about taking full responsibility over his child.

One day, he said he found his 10-month-old daughter had fallen off a bed at home. Troubled by her crying, he called his wife at work and said, "She fell, what should I do?"

His wife answered, "I don't know, I have never been a parent before. You sort it out." 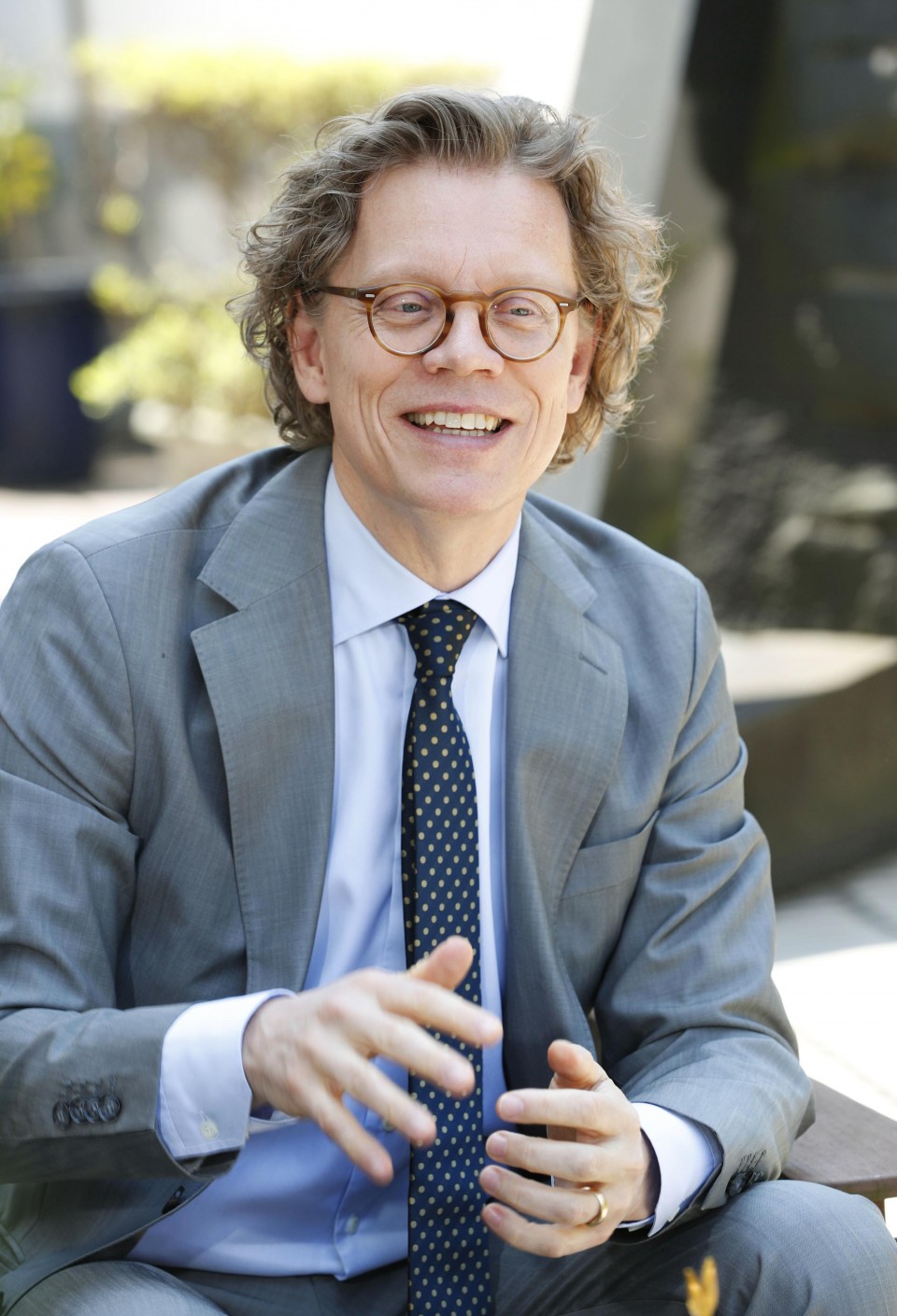 In Sweden, parents are given 480 days of leave per child but it is not possible for one parent to take up all of the days. Of the 480 days, 90 are given to the father.

Although it is for a shorter period than for mothers, the ratio of fathers taking childcare leave surpasses 90 percent, the ambassador said.

Hoegberg said he learned a lot about himself by spending time with his children at home, which required him to be attentive the whole time and deal with "mess everywhere."

He firmly believes that workers can become better bosses from the experience.

"I think men that have been home with children are better bosses. Why? Because they have to think outside of the box," he said. "You cannot have a manual when you raise a child. You need to improvise, you need to come up with new ideas, you need to change the plans and all these things are very important skills also in work life and private life."

"It's easier to be a Swedish ambassador than to take care of a child," he quipped.