The government and ruling coalition on Monday gave up seeking passage of a controversial bill to raise the retirement age for prosecutors during the current Diet session, amid heated public criticism led by celebrities who have taken to Twitter to express their opposition.

Prime Minister Shinzo Abe and Toshihiro Nikai, secretary general of the Liberal Democratic Party, reached the agreement amid calls for the resignation of Hiromu Kurokawa, widely believed to be favored by the prime minister's office who was permitted to remain as chief of the Tokyo High Public Prosecutors Office after he turned 63.

"It's essential to listen to the voices of the people thoroughly and without their understanding we cannot move it forward," Abe told reporters at the prime minister's office, referring to the proposed revision of the Public Prosecutors Office Law.

The ruling parties had planned to seek passage of the bill through the lower house this week but criticism continued to grow Monday, including from another group of former top prosecutors, that it would threaten the independence of prosecutors. 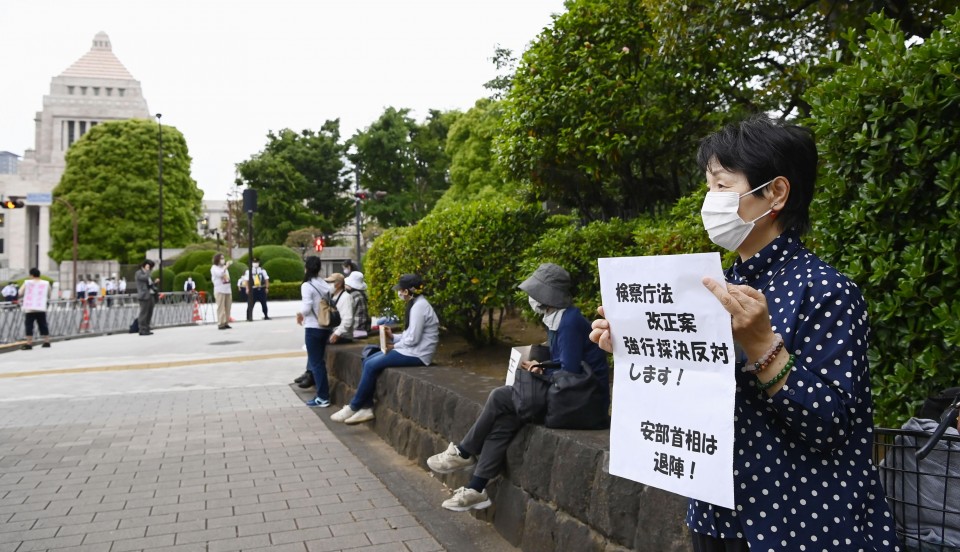 (A woman stands in front of the parliament building in Tokyo on May 15, 2020, in protest against a revision bill that would extend the retirement age for prosecutors pushed by the ruling coalition.)

The change of plan also came amid concern that steamrolling it through parliament would do significant damage to the administration under fire for its handling of the novel coronavirus pandemic.

The secretaries general of Abe's LDP and its coalition partner Komeito agreed that deliberations on the bill should continue beyond the current regular Diet session that is slated to end in mid-June.

The government does not plan to withdraw the bill that has a special provision that the opposition camp and critics say would enable it to retain favored elite investigators in office.

"We must not be involved in a matter that causes problems between the ruling and opposition camps at this crucial time," a senior government official said.

The official added that the government should first seek parliamentary approval by June 17 -- the end of the ongoing session -- of a second supplementary budget for fiscal 2020 to fund measures to support people amid the virus pandemic.

The proposed revision, which was originally to come into effect on April 1, 2022, may be passed in the extraordinary parliamentary session this fall or in next year's regular session instead.

The bill to amend the law, which has been under deliberation in parliament since last month, calls for raising the retirement age of prosecutors to 65 from 63, and contains a special provision that allows some top prosecutors to stay until 66 upon Cabinet approval.

The bill also sought to raise the prosecutor general's retirement age from 65 to 68, if the Cabinet backs it.

Opposition parties have been calling for the special provision to be removed, taking issue with the discretion that the Cabinet would have in making personnel decisions.

"We will turn the voices of the people into power and work toward our goal of scrapping a system that would enable the arbitrary extension of certain senior posts," Yukio Edano, leader of the Constitutional Democratic Party of Japan said at a party meeting.

The CDPJ and three other opposition parties submitted last week a motion of no-confidence in administrative reform minister Ryota Takeda, in charge of Diet deliberations. But they agreed to retract the motion as the ruling coalition decided not to put the contentious retirement bill to a parliamentary vote for now.

Katsuhiko Kumazaki, a former chief of the Tokyo District Public Prosecutors Office's special investigation unit, and 37 others submitted a letter Monday to Justice Minister Masako Mori opposing the bill, saying they "cannot overlook a revision that could become a source of trouble in the future."

On Friday, a group of retired elite prosecutors led by former Prosecutor General Kunihiro Matsuo submitted a letter to the Justice Ministry to express their opposition, while Japanese celebrities had taken to Twitter to voice their criticism.

The Japanese hashtag meaning "I oppose the revision of the public prosecutors office law" began trending on Twitter from May 8, with actress Kyoko Koizumi and pop singer Kyary Pamyu Pamyu among those expressing their opposition to the proposed legal change.

News on Monday morning that the bill may be shelved resulted in a flurry of posts encouraging people to continue raising their voices to push for the bill to be scrapped entirely.

There were increasing calls for the resignation of Kurokawa amid rising speculation the government was looking to him to succeed Prosecutor General Nobuo Inada, who is likely to retire in July.

Others, including retired prosecutor Nobuo Gohara, said it was too early to relax.

"The government is planning to railroad the bill just as criticism dies down and everyone in the world is focused on lifting the state of emergency amid falling (coronavirus) infection cases," he warned.