No imminent virus state of emergency for Tokyo, Fukuoka: minister

The government has no immediate plan to place Tokyo and Fukuoka Prefecture under a state of emergency again despite the areas seeing an increase in the number of coronavirus infection cases in recent days, economy minister Yasutoshi Nishimura said Sunday.

Nishimura, the minister in charge of Japan's virus response, said he does not expect new infection case numbers to increase rapidly as the country reopens its economy but he will continue to carefully monitor the situation. 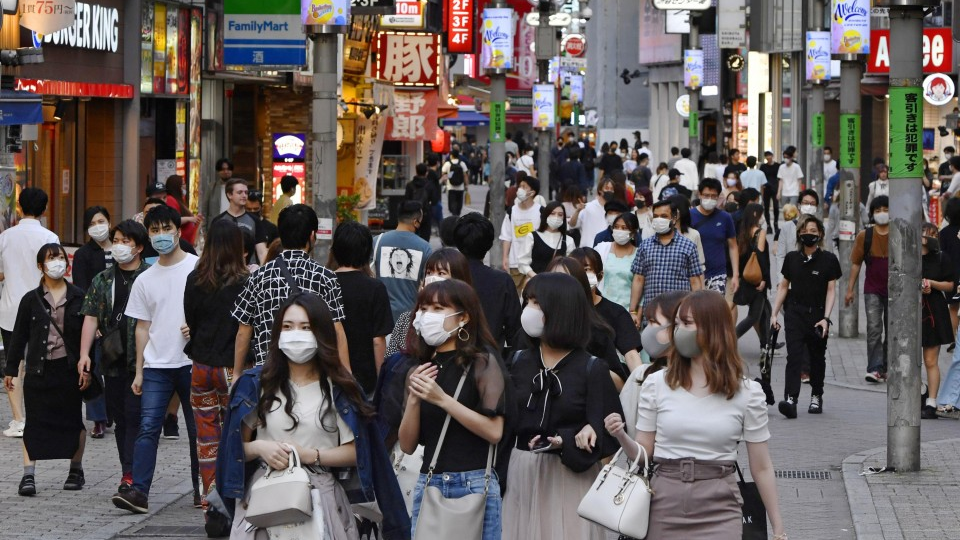 Tokyo's Shibuya area is crowded with people on May 30, 2020, on the first weekend after Japanese Prime Minister Shinzo Abe announced an end to the coronavirus state of emergency. (Kyodo)

"We have not come to a stage of reinstating a state of emergency," Nishimura told a press conference.

The southwestern city of Kitakyushu in Fukuoka had no confirmed coronavirus infections from April 30 to May 22 but began to see double-digit daily growth in cases due to cluster infections at medical institutions.

In Tokyo, the number of new daily cases had fallen to single digits earlier in the month after peaking at over 200 in mid-April but started to creep up from Tuesday, the day after the government fully lifted the state of emergency, initially declared for the capital and six other densely populated prefectures on April 7 and later expanded to the entire country.

The Tokyo metropolitan government said Sunday five new cases of infections were confirmed, falling to a single-digit figure for the first time in six days.

Nishimura said many of the new infections were contracted at hospitals and that those who came into close contact with the infected people have been traced.

As of Sunday evening, 5,236 cases have been confirmed in Tokyo and 753 in Fukuoka.

Businesses will fully reopen and schools will resume classes on Monday in many of Japan's 47 prefectures while some business restrictions will remain in place in Tokyo, Fukuoka and five other prefectures.

Given that governors of Fukuoka and neighboring Yamaguchi have already asked residents to refrain from moving in and out of Kitakyushu, Nishimura said the government will end restrictions on travel between all prefectures, except for five including Tokyo, on Monday as planned.