China on Friday abandoned setting a 2020 economic growth target for the first time in more than 30 years, citing "great uncertainty" over the impact of the new coronavirus pandemic and ensuing global downturn on the world's second-largest economy.

The leadership of President Xi Jinping is apparently eager to have this year's parliament, which got under way on the day, showcase the country's success in bringing the epidemic under control, while acknowledging that severe challenges lie ahead in rehabilitating the virus-hit economy.

It is the first time since 1988 that China has failed to set a gross domestic product growth target at an annual session of the National People's Congress.

"This year, we must give priority to stabilizing employment and ensuring living standards, win the battle against poverty, and achieve the goal of building a moderately prosperous society in all aspects," Premier Li Keqiang said in a work report delivered at the session.

China's broader economy marked its first quarterly decline on record in the January-March period, down 6.8 percent on the year. The virus, which causes the respiratory disease COVID-19, was first detected in the central Chinese city of Wuhan late last year.

"We have not set a specific target for economic growth this year. This is because our country will face some factors that are difficult to predict in its development due to the great uncertainty" over the virus pandemic and the world economy, Li added.

Li, however, said that "major strategic achievements" have been made in response to the virus.

"With an open, transparent, and responsible attitude, China has actively engaged in international cooperation," the premier said, brushing aside global criticism of Beijing's response to the outbreak, such as allegations it concealed crucial information. 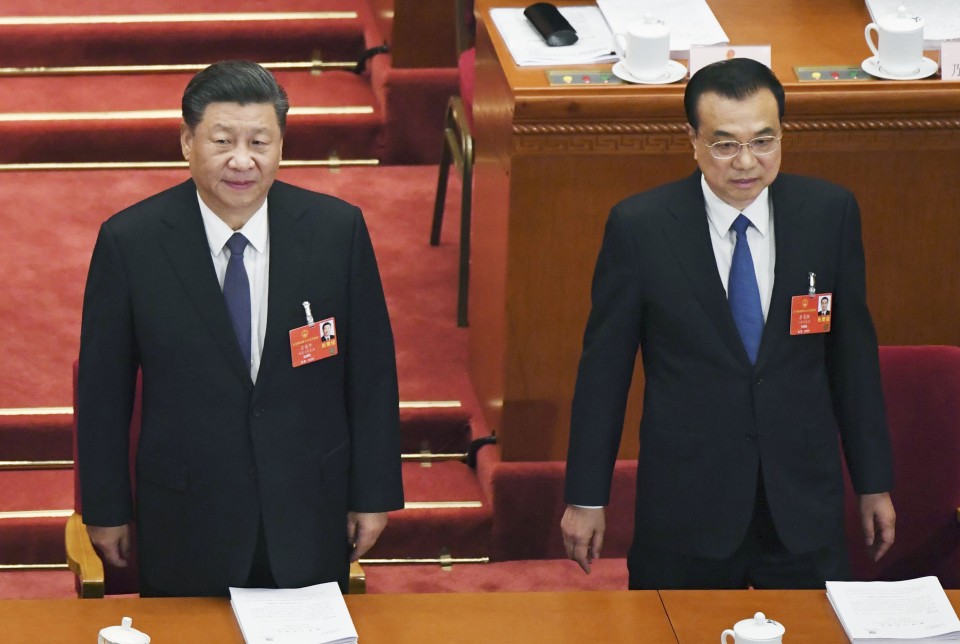 (Chinese President Xi Jinping and Premier Li Keqiang attend the opening ceremony of the National People's Congress at the Great Hall of the People in Beijing on May 22, 2020. The annual parliamentary session was delayed from March 5 against a backdrop of the spread of the new coronavirus.)

Although the increase in infections peaked in China in late February, Li added, "The epidemic has not yet come to an end," emphasizing that the nation cannot declare itself free of the virus at this juncture.

The annual National People's Congress, which usually takes place for around 10 days from March 5 in Beijing, was postponed this year in the wake of the spread of the new virus.

Li pledged to implement stimulus measures, including fiscal expansion and monetary easing, in a bid to boost the job market across the country.

Such bonds would be sold for the first time since 2007, when the government launched a state-run investment company in an attempt to earn greater returns on the nation's vast foreign exchange reserves.

China, meanwhile, said it will expand this year's military spending by 6.6 percent from last year to 1.27 trillion yuan, amid concern over its rising assertiveness in contested waters. The pace of growth was under the 7.5 percent hike in 2019.

The session is also slated to discuss a bill to crack down on what China considers subversive activity in Hong Kong in a move likely to further antagonize pro-democracy protesters in the territory.

If the law is enforced, people in Hong Kong who criticize the Communist-led Chinese government could be accused of sedition.

China has stepped up involvement in Hong Kong, especially since Xi came to power in 2012, sparking fears that Beijing is set to undermine its freedoms and human rights.

As for Taiwan, which China regards as a renegade province, Li said, "We will adhere to the major principles and policies on work related to Taiwan and resolutely oppose and deter any separatist activities seeking 'Taiwan independence.'"

Taiwan and mainland China have been governed separately since they split as a result of a civil war in 1949.

This year, strict security has been in place in Beijing, with the authorities determined to prevent the spread of infections during the parliamentary session, which will end next Thursday.

Reporters, diplomats and others who visited the venue, the Great Hall of the People, were required to undergo coronavirus tests. Some officials are expected to hold press conferences online.

The novel virus has infected about 83,000 people in mainland China and killed over 4,600, the nation's health authorities said.

Globally, more than 5 million cases of infection with the virus have been confirmed, with the number of deaths exceeding 330,000, according to a tally by Johns Hopkins University.