While medical workers in the United States and Europe have been heralded as heroes in the fight against the coronavirus pandemic, many nurses and doctors in Japan have faced discrimination and ostracism despite heightened social media efforts to recognize their contribution.

In an April survey conducted by the Japan Federation of Medical Worker's Unions, 9.9 percent of its 152 offices across the country responded that medical workers in their jurisdiction had encountered discrimination or harassment due to the coronavirus pandemic. 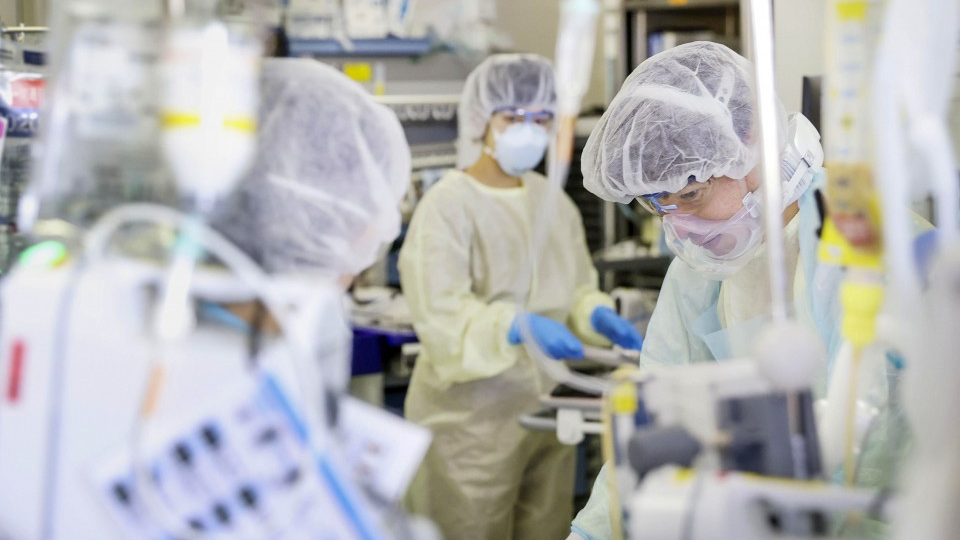 Medical staff treat a patient infected with the novel coronavirus in an intensive care unit at St. Marianna University School of Medicine Hospital in Kawasaki, near Tokyo, on April 23, 2020, amid the spread of the pneumonia-causing virus. (Kyodo)

Cases included being told by family members not to come home, being shunned even by staff from other wards, and being subjected to abuse when making house calls.

A study also found that hospitals and their workers were blamed when coronavirus infections occurred there, resulting in the children of hospital staff being refused entry to kindergartens and other child care facilities or being pressured to stay away from school.

The Kobe City Medical Center General Hospital in Hyogo Prefecture, which had admitted a total of 96 coronavirus-infected patients as of May 22 and seen 29 of its medical workers contract the virus, has released a report detailing how staff and their families have been subject to discrimination.

The husband of a nurse at the hospital was told by his company not to come into the office should his wife continue working. He was effectively forced to choose between his wife quitting her job or quitting himself, according to the report.

Another nurse who was pregnant was denied a medical examination by a doctor at a different hospital, it said.

Meanwhile Kosui Tago, 27, a nurse at a hospital in Nagano Prefecture which has coronavirus patients, spoke of the discrimination that his colleagues face.

The daughter of a nurse at an elementary school has become a victim of bullying, being nicknamed "corona-chan," he said, while another nurse is now living apart from her family out of fear her son might get bullied at elementary school.

"I do understand the anxiety but it is necessary for the people who discriminate to have a wider view," he said. "I think we are not seeing a trend of us being treated as heroes like in other countries because in general, the Japanese like to stay low-key. I'm not working to be treated as a hero but to help the patients." 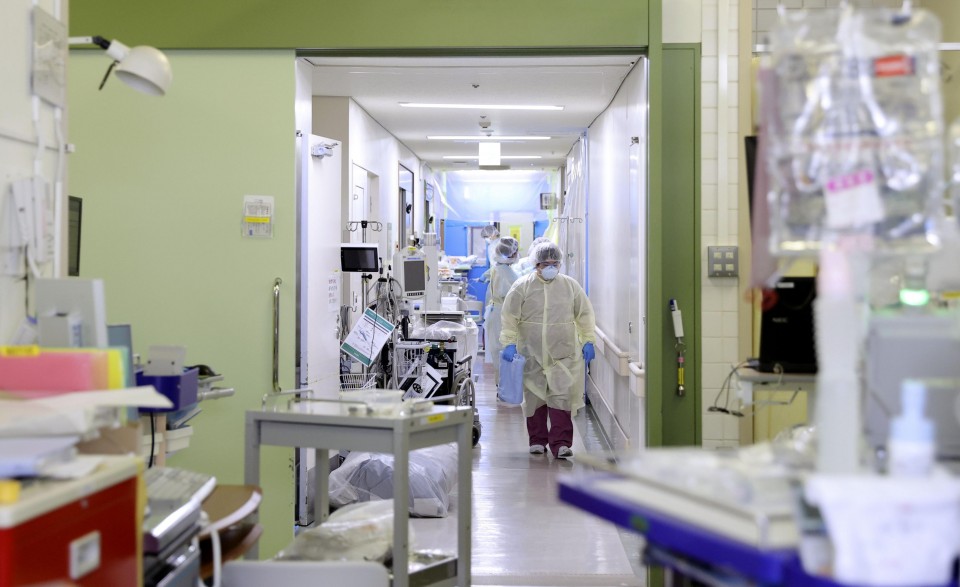 Tago works around six hours on average a day wearing protective gear and attending to patients. "Although the state of emergency has been lifted, we still have to be very careful. The gear is very stressful as we cannot eat or go to the toilet," he said.

Similar experiences of discrimination reported by nurses continue to be shared on Twitter under a Japanese hashtag meaning "corona discrimination."

In late April, a Twitter user claiming to be a nurse posted that she had been told by a mother to refrain from going to a playground with her child.

The tweet attracted more than 2,000 comments, most of which were supportive of the nurse.

"I'm at a loss for words. Are they saying medical workers should only travel between their home and workplace?" one user wrote, while another said, "Healthcare workers are thanked and respected overseas. What happened to the Japanese people? Shameful."

But while some consider such reactions to the coronavirus unwarranted, others have taken a more sympathetic view.

"I think people who turn to coronavirus bullying are tired. Because they have no place to let out the stress that accumulates every day, they use the coronavirus as an outlet," one user wrote.

Medical anthropologist Maho Isono said that while such discrimination should not be condoned, it reflects shortcomings in how the Japanese government has presented its COVID-19 countermeasures to the public, accusing it of messaging that "scares people and creates anxiety."

"When people are required to avoid those who have been in close contact with an infected person, it is understandable as a risk hedge approach that people discriminate against medical workers, even if it is a morally incorrect action," Isono said.

"It is remarkable how a pandemic, and the way that it is communicated to the public, has changed people's moral consciousness," she said, calling on the government and the media to offer more reassurance to the public.

"Since so few PCR tests have been conducted in Japan, there is an overall fear that there are more infections than reported officially. In such a situation, and when the government's approach is to ask people to make voluntary efforts to avoid infection, it is actually natural that they move away from potential sources -- such as medical workers -- to create a zero-risk situation," he said. 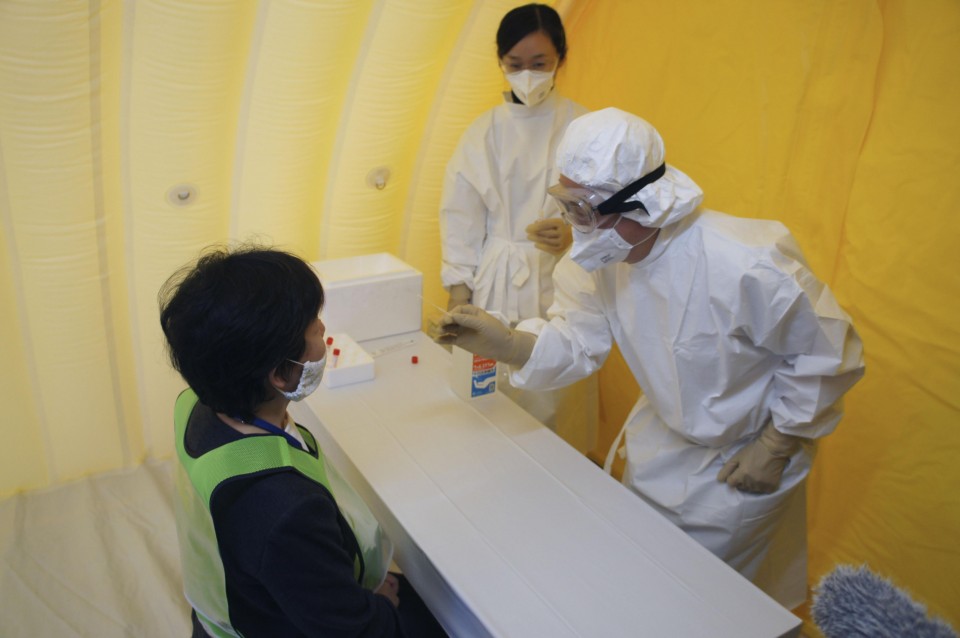 A PCR test to detect the novel coronavirus infection is shown to the media in Tokyo on April 22, 2020. (Kyodo)

Sato believes such behavior will persist as long as there is no vaccine or proven treatment for the virus and physical distancing is viewed as the most effective way to prevent infections.

"This behavior would change if we knew with clarity who is infected and who is not, but the characteristics of the new coronavirus make this hard," he said.

Even medical workers not involved in the coronavirus fight have come under fire. Ironically, given the reaction to those who are, they are being blamed for not being on the frontline themselves.

A nurse in her 40s working at a hospital in Osaka Prefecture where no coronavirus patients have been admitted, said, "I was told (by an acquaintance) that despite being a nurse, I was not contributing to society," she said. "People regard those of us not treating coronavirus patients as useless. I want people to know that this sort of discrimination exists as well."

With over 14 years' experience in caregiving and eight years in nursing, she expressed her frustration at being regarded as a "low-level nurse," simply because her hospital has no coronavirus patients.

"We can't pick our patients, but we take care of them day after day. Even though I have a young child, I still take night shifts," said the single mother of three children, the youngest aged 5.

"We nurses are not only fighting against coronavirus. We treat patients infected with viruses other than corona," she said.

To counter the hostility experienced by some medical workers, sports figures, companies and local governments have stepped in to show their appreciation in various ways.

"We want this message to be sent to many medical workers to invigorate them as much as possible," said Kazuki Nagasawa, the striker and club talisman of the Urawa Reds who initiated the movement. 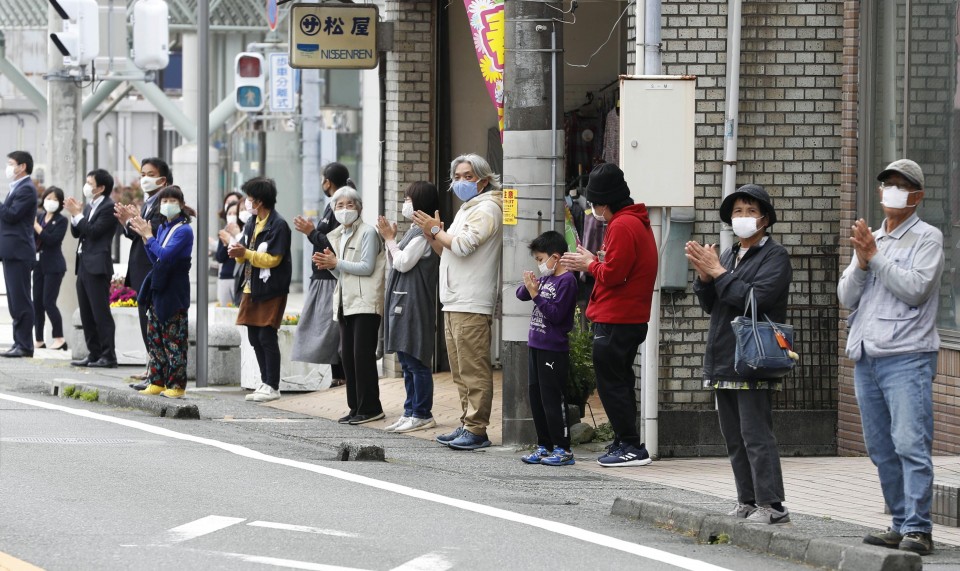 Store owners and shoppers, standing in front of shops in Susono in Shizuoka Prefecture, central Japan, on May 1, 2020, clap for a few minutes to thank healthcare workers on the front lines of the coronavirus pandemic. (Kyodo)

A Japanese hashtag meaning "medical workers are our heroes" has also been trending on the social media platform, with many professional tennis players, boxers and baseball players posting photos of themselves with fists raised in gestures expressing their support for frontline workers.

The iconic pose originates from a gesture characters in the popular manga and anime "One Piece" make when expressing solidarity with each other, Nagasawa explained.

Outside of the sports world, Godiva Japan Inc. drew attention on social media after it began donating chocolates and cookies to send "hope and joy" to medical professionals at around 1,000 hospitals in the country.

The campaign began in mid-April after the popular confectioner was inspired by one of its founders, who had delivered chocolates in a pink van to citizens in Brussels in the aftermath of World War II, said President Jerome Chouchan via a spokesperson.

Drawing inspiration from the cheering and clapping for medical workers as seen overseas in Europe and the United States, officials of some municipalities in Japan also applaud at a fixed time of the day, in what has been dubbed by some as the "Friday Ovation."

Among them is the northeastern Japan city of Iwaki in Fukushima Prefecture, along with the cities of Aomori, Hiroshima and Fukuoka, as well as Ibaraki, Okayama and Okinawa prefectures.

The clapping in Iwaki, conducted every noon, began on April 17 when around a dozen city hall employees gathered in the lobby and applauded for 30 seconds.

Hiroshi Numata, an official from the city's health and welfare department, said he hopes the 30-second applause makes people more conscious about the supportive role they can play and helps counter baseless rumors about medical workers.

"By clapping regularly, we ourselves will be reminded to not put a strain on them and be careful in our behavior," Numata said.

In the skies above Tokyo, meanwhile, the Air Self-Defense Force's Blue Impulse acrobatics corps performed a flyover for about 20 minutes on Friday afternoon to express appreciation to medical workers on the frontlines fighting the pandemic. 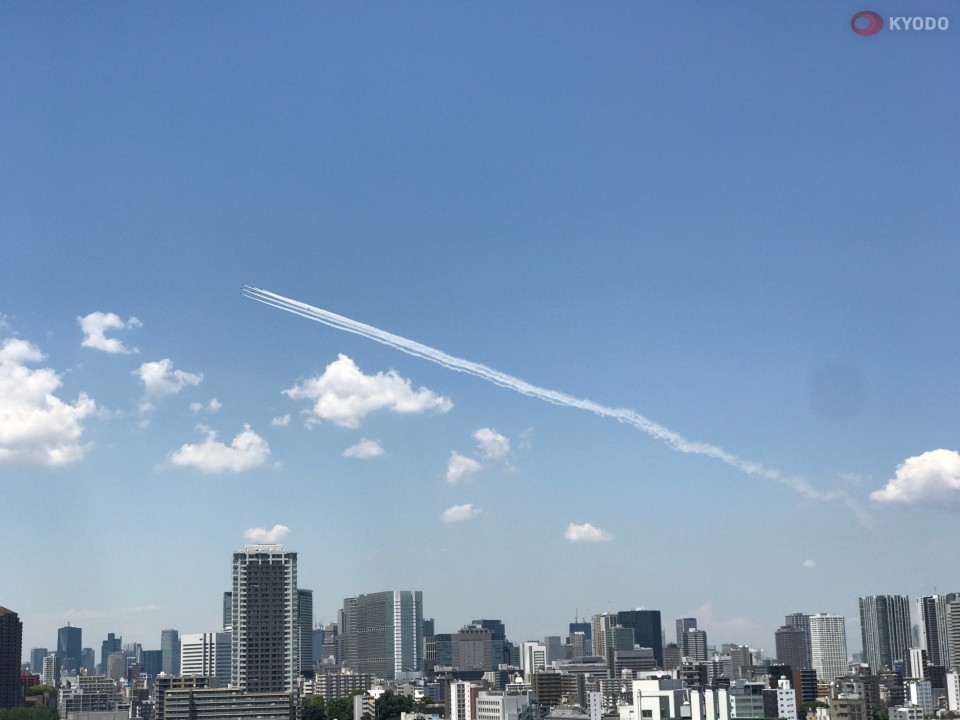 The Air Self-Defense Force's Blue Impulse aerobatics team conducts a flyover in Tokyo on May 29, 2020, to show appreciation to medical workers fighting the coronavirus outbreak. (Kyodo)

Besides moral support, some local governments are also providing financial assistance by tapping into donations via their hometown tax, or "furusato nozei" system, which allows people to donate to a municipality of their choice in return for gifts and certain tax exemptions.

Donations to Ena, Gifu Prefecture, are used to provide medical masks and disinfectants, with donors receiving specially-designed masks from the city in exchange.

Several prefectures also allow people via the hometown tax system to specifically identify "aid to medical workers" as the destination for their money.

Hokkaido, which began soliciting donations from April 24 without any gift in return, hit its target of 50 million yen ($464,000) in just two days.

The northernmost island prefecture, which declared a state of emergency in February long before the central government, became one of the hardest-hit regions in Japan after facing a second wave of infections.

The donations will be accepted through July and demonstrate the public's support for medical workers, said Shigenori Goto, an official from Hokkaido's public-private sector coordination division.

"What we very much want medical workers to realize is that over 7,000 people made donations, and that so many people want to do something for them," he said.